As we mentioned, this is the nicest looking Clevo unit we've ever seen. It's still big and heavy, but the aluminum panels in place of glossy plastic are greatly appreciated. It's unfortunate that Clevo continues to use a glossy plastic bezel around the LCD—the one place where you're practically guaranteed to get fingerprints whenever you open the system. Even with a few minor blemishes, though, the X7200 is a clear improvement on previous designs.

The LCD boasts a good contrast ratio but it's not particularly bright. We've seen this same LCD in the ASUS G73Jh, as well as the Clevo W880CU. It uses CCFL backlighting and produces good colors overall, but still falls far short of a good desktop LCD. Clevo lists a 120Hz 1080p 3D LCD as an optional upgrade, though at present that's missing from the AVADirect configurator. We'd really like to see what the 120Hz panel is like, because hopefully it can boost the brightness without sacrificing contrast, and 120Hz signals are nice even if you never run a 3D movie or game. Considering all the other features, we would have liked to see keyboard backlighting, and the blue glowing strip in the touchpad seems less important than glowing keys, particularly if you're ever interested in attending a LAN party.

With all the other improvements, it's a crying shame that Clevo still can't be bothered to fix their lamentable keyboard layout. Seriously, look at the number keypad and cursor keys.

The decimal point, plus, and minus keys are in a location that differs from every full size keyboard on the planet, and it's not as if they don't have enough room to fix the layout. There's easily an inch and a half on the right and left sides of the keyboard that could be put to good use with a better layout. Once again Clevo trots out the same old tired keyboard design, with [Fn + cursor] key combinations required to use the Home, End, PgUp, and PgDn keys—or you could disable numlock and find those keys on the number keypad. Simply put, neither solution is remotely acceptable in a high-end desktop replacement with plenty of room. I'm not sure how to get through to Clevo on this one, but your keyboard layout is garbage and needs a change! Here's a simple solution, taken from Dell's Precision M6500: 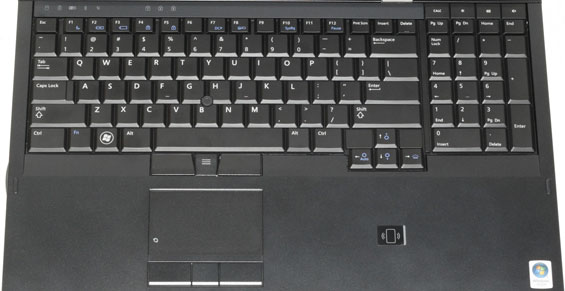 See how easy it would be to fit that into the 17" and larger Clevo designs? See how Dell manages to put a normal 10-key in there, with cursor keys slightly offset so you don't accidentally hit the right arrow when you're looking for the zero, or the enter key when you're going for the decimal point? I don't know if there are a bunch of Clevo users out there that love the current layout, but for me it's a low point on every Clevo based laptop I test. People are paying well over two grand for these systems, and we're talking about a change that should cost a small amount of "R&D" at best. Granted, Clevo has keyboard layouts for quite a few languages, but I'm betting they all have the same layout issues as the US version.

Dustin went off on the Acer/Gateway keyboard and the "floating island" keys a couple weeks back, but for my money I'd say this is the more egregious sin. Gateway and Acer laptops are at least value propositions, but this is a bucket load of cash for something just as bad. If you never use the 10-key or the Home/End and PgUp/PgDn keys, the keyboard action is fine and represents typical chiclet designs, but on a mobile workstation I'd want to use both the 10-key and the page navigation keys. (I do miss the context-menu key on the Dell, however... it's something I use but I'm not sure anyone else does. That's easy enough to correct, of course.)

Incidentally, I did a 10-key typing test just to see how bad the layout affects me. The verdict: I key in numbers (with decimal points and mathematical operators) three times as slow and I'm about five times more likely to make an error! I could probably improve after a while, but I can never see myself using this 10-key at anything approaching a normal speed—especially if I continue to use regular desktop keyboards on a regular basis. Thankfully at least there's not a bunch of flex in the keyboard to really push me over the edge, but for a high-end notebook the keyboard is at best merely average. But enough about the keyboard, let's look at the internals. 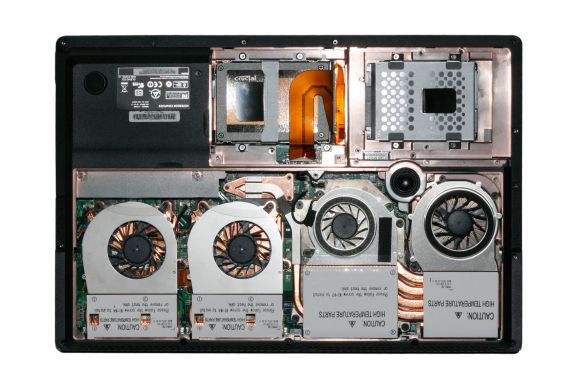 Getting at the insides of the X7200 isn't too hard, though there are four different areas you can access. For the main CPU and GPU area, you remove the single large access plate on the bottom. That gets you a nice view of the four gigantic blower fans and heatsinks for the CPU, chipset, and GPUs. A smaller plate lets you get at the double HDD bay (occupied by the two C300 SSDs in our system), and the battery needs to come out if you want to get at the third hard drive slot. As for the memory, to upgrade RAM you'll need to remove the keyboard—a bit more of a pain in the rear than some of the other laptops.

What we'd really like to see is the ability to upgrade GPUs to newer designs down the road. Judging by Eurocom's Phantom 2.0, the X7200 can support everything from CrossFire HD 5870 to GTX 460M, 470M, and 480M SLI. I can't imagine power budgets on future notebooks getting much bigger than 100W per GPU, and with a hex-core "extreme" desktop CPU the graphics are certainly going to be the bottleneck in gaming. Unfortunately, longevity simply isn't a strong point for desktop replacements. The X7200 may be a barnburner for notebook performance right now, but inevitably we're going to see "GTX 580M SLI" or "HD 6870 CrossFire" in the next year or so that will surpass the current setup. If you're willing to drop four large on a gaming notebook, having the ability to upgrade to newer graphics chips for a couple years would be great. For now, we wouldn't count on any GPU upgrades.

AVADirect Clevo X7200: Hail to the King, Baby! Clevo X7200: This is your games on 480M SLI
Tweet
PRINT THIS ARTICLE
Comments Locked