It would be great if doing 3D Vision was as easy as regular computer tasks, but that's not the case. As we'll see in a moment, running games in 3D Vision mode often comes with a huge performance hit that's more than the GTS 350M can handle. Perhaps that's why Toshiba is billing the A665-3DV as more of a multimedia 3D platform than a gaming 3D platform, so we felt it would be good to start with a look at the multimedia aspects. There are really just two kinds of media to consider here: movies and images. Let's start with the latter, as it's a bit easier. 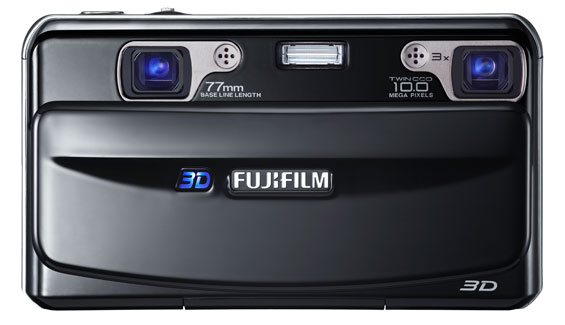 As part of the review, NVIDIA shipped us a Fujifilm Real 3D W1 camera. We're not going to turn this into a camera review (frankly, I'm not the right guy for camera reviews!), but the basic concept is easy enough: instead of one lens and sensor, put two into a camera and now you can take 3D pictures. The lenses on the W1 are set about eye width apart, so in default mode you can now capture a 3D stereoscopic image at the snap of a button. Cool! The LCD on the rear of the camera allows you to see the 3D effect, but it's a low resolution affair that doesn't really capture the experience. The 3D images are stored in an MPO format, along with an optional JPG from the left lens, and NVIDIA's 3D Vision Photo Viewer can display the files on your laptop. If you want a full review of the W1, for now I'll just refer you to this photographyblog review that covers the salient details. The W1 works as advertised, and honestly some of the pictures can look really cool. The movie mode wasn't as useful in my experience, as it's quite noisy and only captures at 640x480, but if you're a 3D enthusiast I'm sure you can have some fun with it.

Okay, back to the discussion of 3D images. Using a camera (or downloading sample images from the web), you can get some really cool stereoscopic images that really have depth. If you've ever looked at Magic Eye pictures and thought, "okay, neat, but a bit of a head throb", 3D images with glasses provide a far more impressive result, with no need to spend several minutes trying to figure out what you're looking at. I let my daughter run wild with the W1 for a while, and then we looked at the pictures she captured. Some were blurry, some were too close to the subject and "broke" the 3D effect, but a lot of them were quite good. It's a fun tchotchke at the very least… fun but quite expensive. Still images also cause less eyestrain for me, as you can take your time and examine the image.

Movies take the above and add motion, which can be a bit disorienting for some people. If you've ever been to a modern 3D movie (i.e. Toy Story 3 in 3D), you know what to expect. The experience of watching 3D movies on the A665-3DV is very similar, though as noted earlier there are certain color transitions that bleed over slightly from one eye to the other because of a less than perfect pixel response time. The 3D movie experience depends largely on the quality of the 3D movie, though, so some movies look like there are a few flat planes where the action takes place, while others offer more of a contiguous 3D experience where there aren't discrete planes. (Note that 3D movies made with the W1 camera fall into the latter category, thanks to the use of two discrete lenses.)

I actually find 3D movies sort of cool, but not enough that I'm willing to shell out an extra $5 at the theater, $300 extra for a 3D laptop, or $500 for a 3D camera. At the end of a two-hour 3D movie, my eyes also feel tired and I'm definitely ready for a break from 3D. Our former editor Derek Wilson would typically hit max tolerance for 3D after just 30 minutes or so, while others aren't bothered by the experience at all. If you happen to be part of the movie-going crowd that watches every possible film in 3D, you'll probably like—or at least be more receptive to—the idea of a 3D notebook. If you can find some good 3D streaming video or 3D broadcasts (i.e. the recent World Cup in 3D), so much the better. Sadly, that's easier said than done, what with network provider exclusives and other shenanigans.

Toshiba addresses that last problem (sort of) with their 3D Video player, which allows the enhancement of DVDs to produce a 3D effect. (I believe there's a similar image viewer in the works, but it wasn't available at the time of writing.) The result isn't the same caliber as a true 3D movie, with some scenes getting the 3D wrong, but I have to say: the fact that they can even make it work at all is impressive. There's some serious image analysis and processing going on to convert a 2D video into a faux-3D video in real time. As impressed as I am that this sort of enhancement can be done, I have to say I prefer sticking with the standard mode for DVDs—or perhaps enabling the Toshiba DVD player's alternate "upconvert" mode that applies a sharpening filter to DVDs to make them look better on HD displays.

The quick summary of the 3D multimedia experience is that, short of holographic displays, the 120Hz 3D Vision experience is about as good as we're going to get for a while. The only problem is that when you're dealing with a 3D notebook (or computer), you're generally limited to experiencing 3D by a single person at a time. If you have multiple pairs of shutter glasses, you could have more than one person watch a 3D movie with you, but with a small 15.6" notebook screen it's not nearly as compelling an argument as watching a 3DTV together. I don't have any external 3D displays or a 3DTV for testing, so unfortunately I can't comment on how well that does or doesn't work, but that's partly because what I've seen so far isn't enough to get me to buy in to the technology. It's cool for a while, but at the end of the day it feels more like a gimmick.

I've read suggestions that 3D isn't helping the movie industry, that fewer people are going because of the higher prices, and that the only reason Hollywood pushed for 3D was as a way to get the theaters to convert to digital, which would save tons of money in distribution costs. Maybe the problem is that people just weren't impressed with this summer's 3D blockbusters. If you like 3D video, have a 3DTV, and are excited for the all the current and upcoming 3D Blu-ray releases, adding a 3D notebook to the fray is the next step; but I think the number of users that fit that description is limited at best. If you're mostly interested in multimedia 3D, I'd also recommend finding a 1080p 120Hz LCD to go with the 3D Blu-ray experience.