Apple MacBook Pro 13: Can a Mac Be a Decent Windows Laptop?

Apple MacBook Pro 13—Some Quirks as a PC

Yes, there are quirks, but not as many as one might suspect. For the most part, the MacBook Pro functions as any PC notebook would, though with some of Apple’s features present. To smooth out the transition between the designed-for-OS X hardware and the Windows system, Apple has included a Boot Camp utility to customize settings with the mouse, keyboard, and which operating system the notebook should boot on the next restart.

The keyboard settings are pretty sparse; you can choose between having the F-keys default to F1, F2, F3 etc., or default to the brightness and volume changing utilities, with a press of the function key to use the standard F-keys. The trackpad settings are more interesting: you have two finger right click, two finger scroll, and various options to lock the touchpad in drag mode (it’s hard to describe, but makes sense instantly when you use it). The best part is turning the bottom right-hand corner of the touchpad into a right click button. Tap anywhere else, you get a left click; tap at the bottom right (where you’d expect the right click button to be on a PC notebook) and it’ll give you a right click. It’s pretty brilliant, and rectifies one of the chief complaints with running the older MacBooks and MacBook Pros under Windows, where it was necessary to Ctrl+tap to get a right click.

Overall what struck me was how cohesive the experience was in Windows. Everything translates over pretty well—Apple has coded in the same popup animations for the hardware control shortcuts (volume, brightness, etc) for Windows, and the two finger scroll is simply the best in the business. I don’t know how or why, but two finger scroll on the MacBook Pro just works better than two finger scroll on normal Synaptics touchpads, and the entire touchpad just works. It amazes me that basically nobody else has figured out how to do a buttonless/single button touchpad yet (Dell, HP?), but Apple’s is pretty great, especially with the new right click corner. Maybe it's just the size of the touchpad—bigger is better? 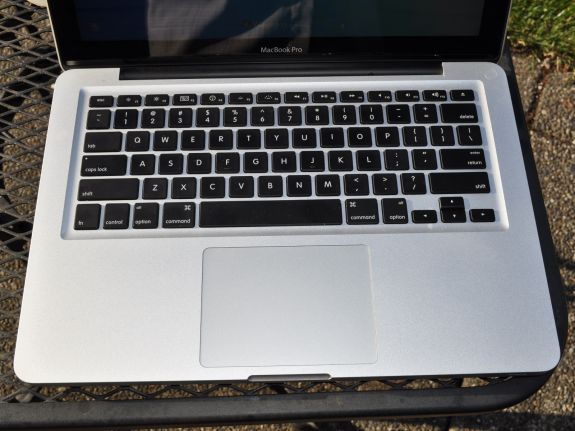 The keyboard wasn’t as easy to adjust to though. I go through a lot of laptops, so I’ve gotten pretty adept at switching between various layouts, but for some reason the MBP threw me more than most. I don’t remember having trouble adjusting to any of the previous two dozen-odd notebooks I’ve had in the last few months, so it was definitely different. I’m not entirely sure why, probably just a combination of things. Apple likes to switch the control and function keys, Lenovo-style, and I think I got used to the OS X shortcuts on the Apple keyboard (which is odd because I never actually used OS X on this system beyond running the Boot Camp partition utility the first time). Unfortunately, Apple+C and Apple+V aren’t copy and paste in Windows.

But other than that and the occasional annoyance at having to use the function key to get some keys (Fn+Bkspace to get Delete, Fn+Up/Down for page up and down), the keyboard was as awesome as it always has been. As I said before, it’s the best chiclet keyboard out there, even better than the ThinkPad chiclet keyboard. It just underscores this point: everything that makes the MacBook Pro a great notebook in OS X still makes it a great notebook under Windows, with a couple of quirks along the way to give it character.