As one of the first up-to-date AMD notebooks to hit our labs in a long time, the Toshiba A660D certainly piqued our interest. Where will the quad-core P920 fall in regards to the competition? How much will battery life improve? How does gaming fare? You've got questions, and we've got the answers. Here's a recap of the pertinent details of our test system. 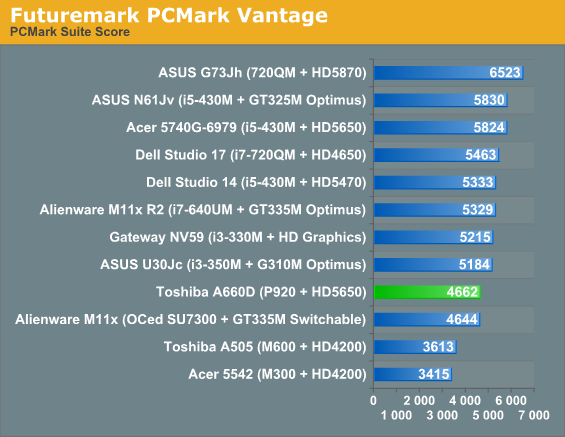 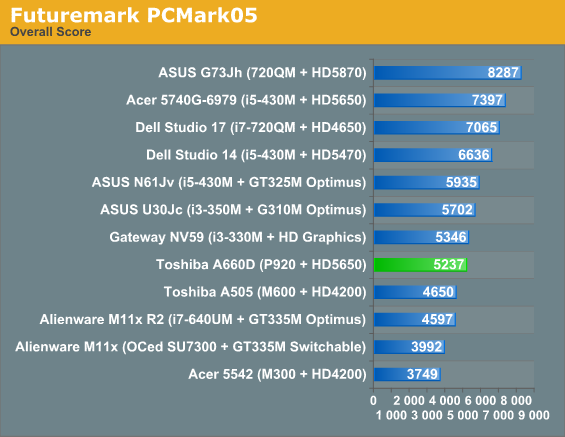 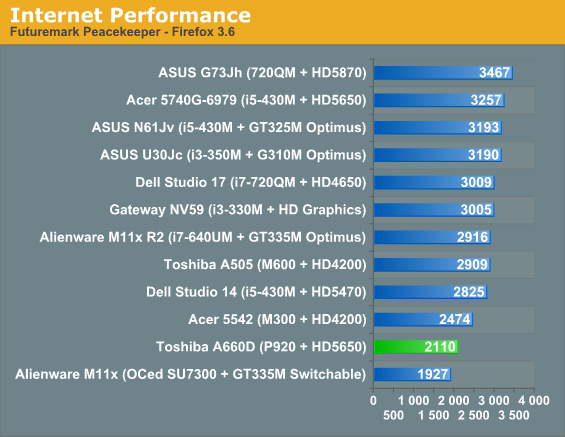 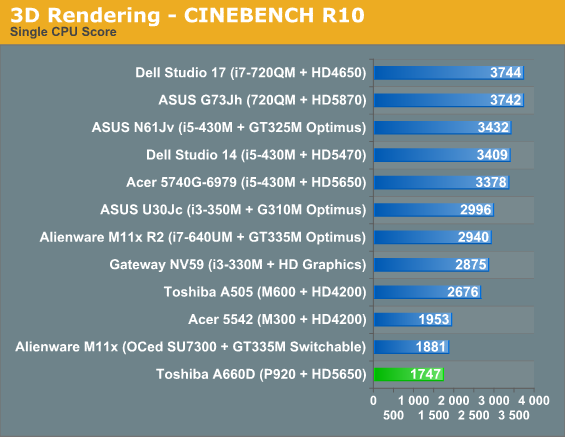 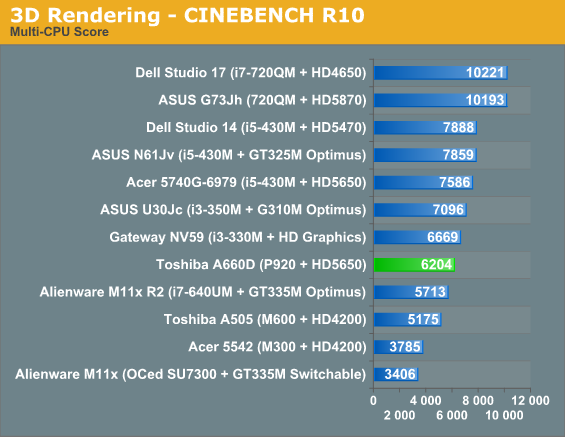 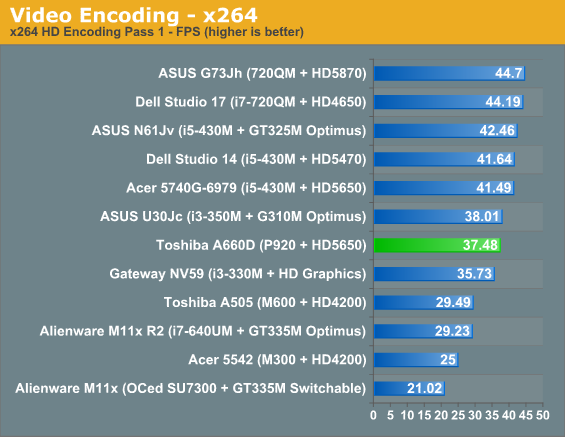 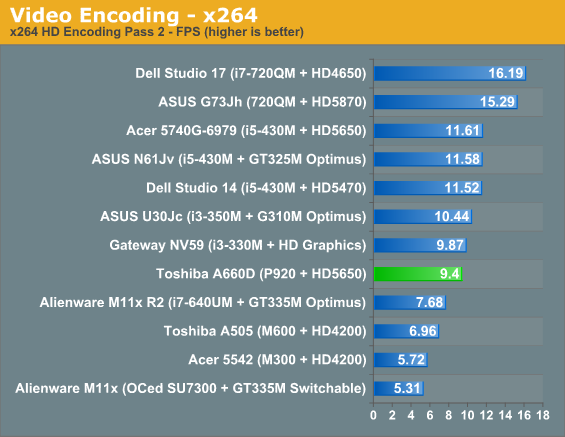 Starting off with PCMark Vantage and PCMark05, we get our first glimpse of the potential of the P920. Despite the lower clock speed, the P920 outpaces the Turion II M600 by 20% and the Athlon II M300 by 27% in Vantage. The gap is smaller in PCMark05, but that's obviously an old (outdated even) benchmark so we won't worry about it too much. That's the good news; the bad news is that Intel's slowest Core i3 processors are still faster in general application performance. The i3-330M with Intel HD Graphics is 20% faster, and the i5-430M with HD 5650 is 34% faster. The slow clock speed of the P920 just doesn't keep up in these types of workloads.

What about the AMD quad-core versus Intel quad-core comparison? The ASUS G73Jh does come with a faster 5870 GPU, but even when we take that out of the picture the i7-720QM is clearly much faster than the P920. The gap is 50% in PCMark Vantage, and it goes up from there. The lead is 64% in Peacekeeper and 114% in the single-threaded Cinebench result, where Turbo Boost is in full effect. The lead in multi-core Cinebench is 64%, 2nd pass x264 is 63%, and the closest result is in the 1st pass x264 where the lead drops to just 19% (as memory and storage performance become bigger factors).

The P920 is certainly fast enough for most users, but the fact that a quad-core processor can't establish a lead over dual-core Intel parts even in multi-threaded tests is telling. Low power draws are good for battery life, but higher clock speeds are necessary to close the performance gap. We'd really like to see AMD put their Turbo Core technology from the desktop Phenom II X6 processors into their mobile parts, as the low 1.6GHz clock is definitely hurting performance in many tasks. In fact, there are a few instances where the overclocked SU7300 CULV processor (in the Alienware M11x) beats the P920. AMD does have some faster quad-core parts available, of course. N930 runs at 2.0GHz, which means it should be around 25% faster in CPU limited tasks, and the X920 BE runs at 2.30GHz, but those comes with 35W and 45 TDP, respectively. At lower loads those processors should use roughly the same power as the P920, but load power draw will be substantially higher.

The bottom line is that AMD's CPU cores could still use help, as clock for clock they're similar to the old Core 2 chips. Core 2 was available at speeds up to 3.07GHz dual-core and 2.53GHz quad-core, and even the fastest of those parts are surpassed by the midrange Core i3/i5/i7 parts. AMD is able to compete with Intel's old generation mobile hardware now, but that still means they're around 18 months behind. The result is that they need to sell at lower prices to stay relevant, and that's what they're doing.

For those that like to compare 3DMarks, here are the results from the A660D (using the HD 5650 in all cases). Consider this a preview of the gaming performance on the next page. 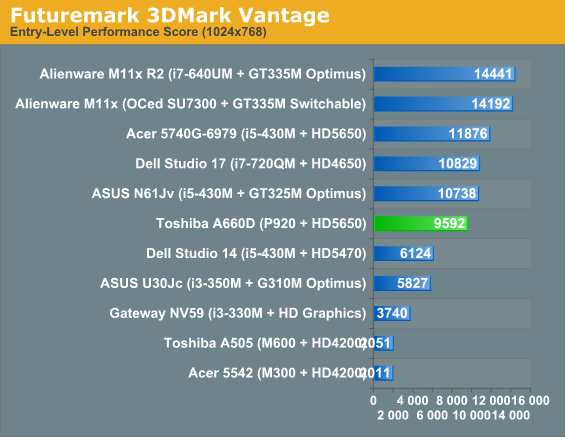 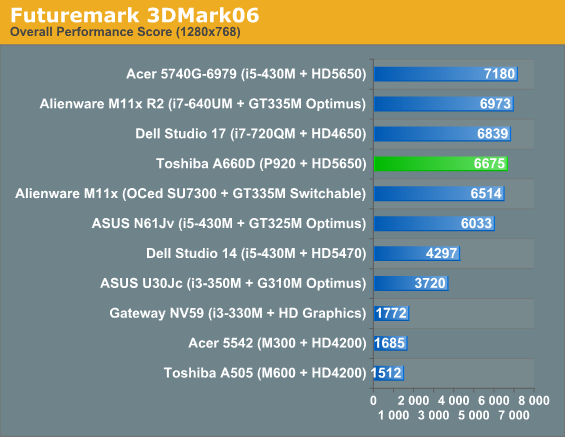 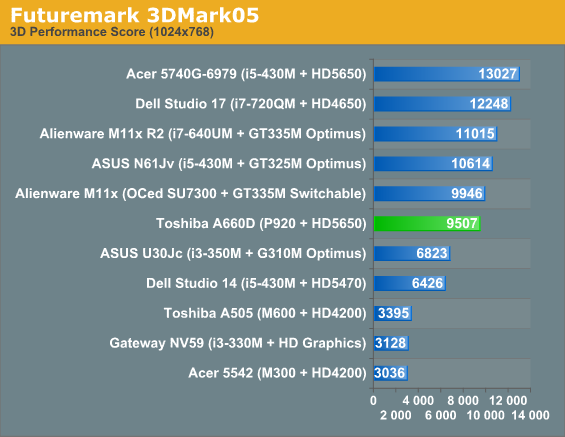 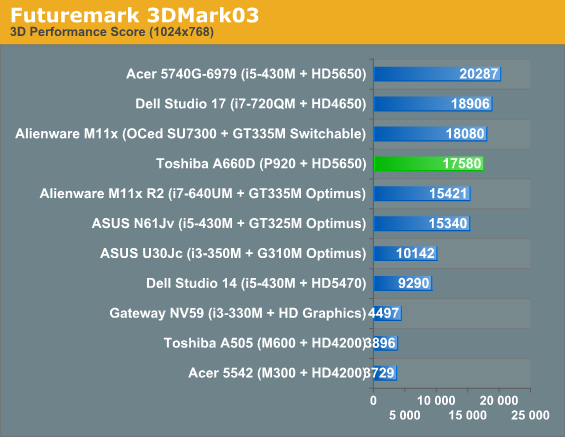