Toshiba's A505D that we reviewed in Junewas something of an eyesore, and thankfully the A660D does a lot to remedy the situation. There's still a glossy LCD, naturally, but the main chassis is now a textured (but still glossy) plastic. The texture goes a long way towards making the design more palatable. The keyboard has also been modified with chiclet-style keys, though they still have a slick glossy surface. The design is dubbed "Fusion X2" by Toshiba, and it definitely improves on the original Fusion, but there's still a lot of items that will be a matter of personal taste. Having used the laptop for the past month, I can say that after the initial reaction of "Gah! Glossy plastic keys!?" I have grown accustomed to the A660D. It's not my favorite laptop keyboard, but it works. Still present are the Harmon Kardon speakers, which offer good sound quality for a laptop. The keyboard also has LED backlighting, and eSATA and ExpressCard/34 expansion options are present.

While we had issues with the glossy plastic keys, the keyboard layout remains very good. There's a full size numeric keypad on the right, with the proper arrangement of keys. Dedicated Home/End/PgUp/PgDn keys are above the 10-key, and there are a smattering of multimedia a quick access keys along the top. As Dustin mentioned in the Studio 17 review, a vertical column of Home/End/PgUp/PgDn keys between the keyboard and 10-key would be preferable in our view, but it's not a huge issue. One interesting feature is a software utility that pops up whenever you press the Fn key that gives you a quick list of all the Fn shortcuts as well as access to a Toshiba configuration utility. It can be a bit in-your-face, but for less computer savvy users it might be helpful.

Unfortunately, the keyboard and chassis as a whole show some flex, giving the notebook a slightly cheap feel. This seems like a compromise in the quest for lighter weight, and we would be happier with a few extra ounces to give the chassis better rigidity. A better LCD—and a higher resolution panel—would also be welcome extras at the $950 price point. 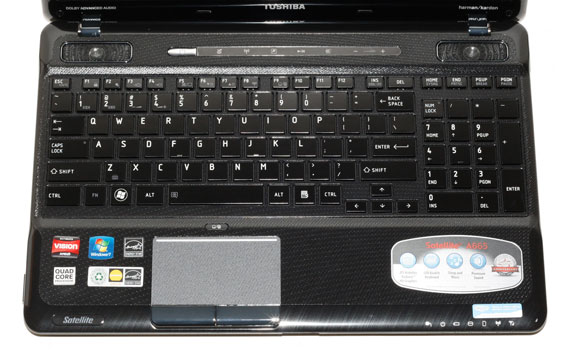 We thought the touchpad on the A505D was decent, and again this is an area where the A660D ups the ante. The mousing surface is larger, the two dedicated buttons are slightly smaller, and the textured surface feels nice to the touch. Multitouch functionality works well, with the standard scroll/flip features available. We're still missing the four-finger gestures found on Apple MacBooks, and it would be interesting to see an OEM try to get an equivalent of Exposé on Windows, but the Toshiba A660D touchpad is as good as any of the other Windows laptops we've tested. A button above the touchpad allows you to enable/disable the device, for times when you're doing a lot of typing and errant touches get in the way.

The ports are the same as the A505D, with three dedicated USB 2.0 ports, a shared eSATA/USB 2.0 port, VGA and HDMI, and the other items like headphone and microphone jacks. The only real change in this area is that the ExpressCard slot is now /34 instead of /54, though it appears most ExpressCard devices are opting for the narrower form factor so this shouldn't matter much. The heat exhaust is on the preferred left hand side, out of the way of right-handed mouse users. A few other changes relative to the A505D are the use of a standard DVDRW in place of the slot load drive, and the lack of a physical WiFi switch. Some will miss these more than others, but overall the design is improved over the A505.

LCD quality is okay—slightly better than average, but nothing to write home about. The viewing angles are still poor, but it's nothing we haven't discussed with TN panels in the past. Something else we'll see later is that battery life is definitely improved over the previous AMD notebooks we've tested. That's particularly impressive when we consider the presence of a quad-core CPU. The down side is that the processor is clocked at a relatively low 1.6GHz, so short of multimedia enthusiasts and content creation, most tasks will end up slower than if Toshiba had used a faster dual-core CPU. The Turion II P520 has a 2.3GHz clock speed and the same 25W TDP, and with C-states and only two cores it seems likely that battery life could be improved even more while also improving single-threaded performance.

If you're in the market for a higher performance AMD-based notebook, the Toshiba A660D looks decent. The quad-core CPU, HD 5650 GPU, switchable graphics, and improved battery life are all positives, but it's also important to keep things in perspective. You can find a variety of Acer notebooks with a similar GPU for around the same price, but your options are generally limited to Intel Core i3(dual-core without Turbo Boost) or i5and a 17.3" LCD for a slightly lower price. There are also AMD Phenom tri-corenotebooks—again at a lower price—and other options from HP and Acer at higher prices. What none of the competition appears to offer is the same selection of components, features, and size. In fact, the biggest competition in this price range is far more likely to come from smaller laptops like the ASUS K42JV, which goes with Core i5-450M(2.4GHz plus 2.66GHz Turbo Boost) and Optimus NVIDIA GT 335M for $120 more. This really comes down to priorities, and we hope to have the K42JV or N82JV for review shortly, but the A660D does present an interesting platform.