The front of the display is glossy, but tasteful. There’s the ASUS logo front and center, a subtle HDMI logo silkscreened in the bottom left, and on the bottom right are the OSD control buttons. To the right of the rightmost button is a blue power LED.

I guess these buttons are my second and last major complaint about the VG236H. There are 6 buttons, and while they work just fine and the control schema itself is straightforward, the problem is just how hard to see they are. The symbols are screened onto the plastic, and are just too hard to see.

The other problem is that there aren’t any raised edges or bits on them, so it’s hard to know when you’re actually pressing the center of a button. Most of the time, I just counted gaps to tell which button I was on. The power button has a small red line which differentiates it, but the rest are all the same and are just a bit difficult to use. There’s also a bit of flex in the whole display arm when pressing these buttons.

I figure we should talk about the OSD controls here, which are actually very good. ASUS exposes different settings in the image tab depending on which spelendid mode you’re using. Under Standard, you’ll only be given brightness, contrast, and trace free - which lets you directly control LCD Overdrive. You can change ‘Trace Free’ in increments of 20, from 0 to 100. 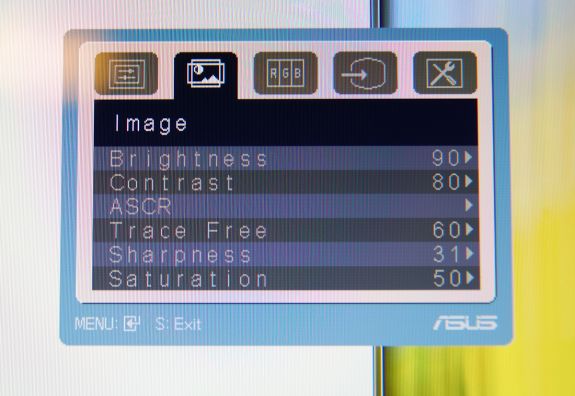 Change modes to ‘Game’, and you can change brightness, contrast, ASCR (dynamic contrast), trace free, sharpness, and saturation. In fact, all of the modes except Standard seem to expose all the settings, which is interesting.

When you’re in 3D mode, the OSD also locks down into predefined settings for optimal 3D quality. In fact, all you’re left able to control is contrast. I can understand this - when doing things in 3D, you’re going to want all the brightness the panel can deliver, and probably the most ‘Trace Free’ the display can offer.

ASUS also thankfully provides a variety of OSD aspect ratio controls. You can select from full, 4:3, and overscan. There’s no 1:1 option, but what content seriously isn’t 1080P these days anyways? Full and 4:3 are self explanatory - Full is basically stretch, while 4:3 leaves you with black bars.

Overscan is a bit different, and I’m surprised ASUS included it, but props for doing so. I’d say that overscan is still a misunderstood beast for a lot of the population, but it’s simple - it’s extra image around the viewable image which gets cropped out. Back in the days of CRT TVs (seriously, can you still find a CRT TV at a store anymore?), image placement wasn’t perfect. To ensure uniformity, there was a safe area for content and important information, and a border that would get cut off. If you’ve ever done layout for publishing, think about the bleed area used for trimming, and you’ll get the picture exactly.

You can see the difference between the xbox dashboard with overscan on and off here. Basically, putting the monitor in overscan mode is what you’ll want to do, as you get close to 1:1 reproduction with no cropping. It’s awesome that ASUS included this, even a number of high end TVs have ambiguous or no overscan control, which is annoying.

There’s also our complete OSD tour in the gallery below:

Viewing angles on the VG236H are what you’d expect from a TN panel. There isn’t very much contrast or color distortion viewing the display at even extreme horizontal angles, it’s vertical angles that are sensitive to viewing angle. Check out our viewing angle gallery below:

ASUS advertises 170 degrees of viewing angle in the horizontal plane, and 160 degrees in the vertical with a 10:1 contrast ratio. I’d say the vertical angle you get isn’t quite as advertised, but honestly if you’re viewing the monitor from so far down below that this is noticeable, you’re probably doing something wrong and will complain more about damage to your spine than how colors look funny.