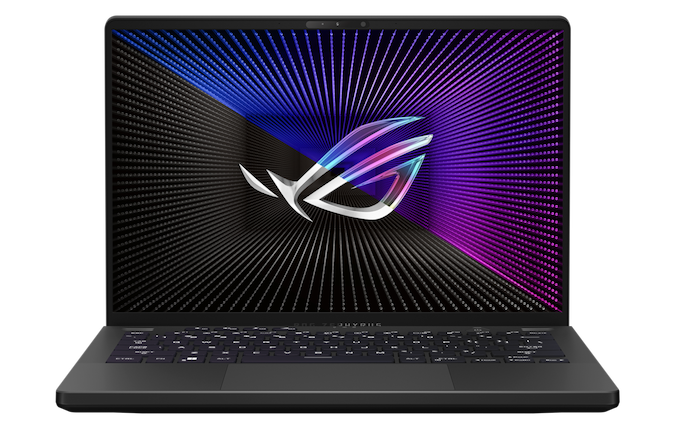 Earlier this year, AMD announced an update to its mobile processor line that we weren’t expecting quite so soon. The company updated its Ryzen 5000 Mobile processors, which are based around Zen3 and Vega cores, to Ryzen 6000 Mobile, which use Zen3+ and RDNA2 cores. The jump from Vega to RDNA2 on the graphics side was an element we had been expecting at some point, but the emergence of a Zen3+ core was very intriguing. AMD gave us a small pre-brief, saying that the core is very similar to Zen3, but with ~50 new power management features and techniques inside. With the first laptops based on these chips now shipping, we were sent one of the flagship models for a quick test.

Everyone loves a good codename, and the silicon behind these new mobile processors is called Rembrandt, following AMD’s cadence of naming its mobile processors after painters. Built on the TSMC N6 process node, Rembrandt is one of the first products to use this node enhancement and get some additional voltage/frequency benefits of the updated process. Featuring 8 Zen3+ compute cores and up to 12 RDNA2 compute units for graphics, the monolithic Rembrandt die is designed to scale all the way across AMD’s notebook portfolio, from thin-and-light notebooks down at 15 W all the way up to mobile workstation-level performance at 65 W.

For our testing today, we have the Ryzen 9 6900HS, which is in the top tier product line but designed to be a power-optimized product that AMD uses with select partners based on a collaborative design approach. Anything with the HS at the end means that AMD has been involved in the planning, design, and optimization – the goal here is that AMD wants the HS parts, which have been selected from production with the best performance-to-power ratio, as showcasing the Ryzen brand at its best.

For this new core to move from 7nm Zen3 to 6nm Zen3+, a number of new additions to the microarchitecture have been made. Normally we consider this to be either a simple manufacturing optimization due to the process node change, or something more fundamental to the core when there’s a microarchitectural change. In this case, AMD hasn’t really discussed any specific improvements coming from the smaller process node, instead focusing on improvements made to the SoC as a whole. At the announcement of the hardware, the headline was ’50 improvements relating to power’, and with the hardware launched we now have insight into what a number of these are. 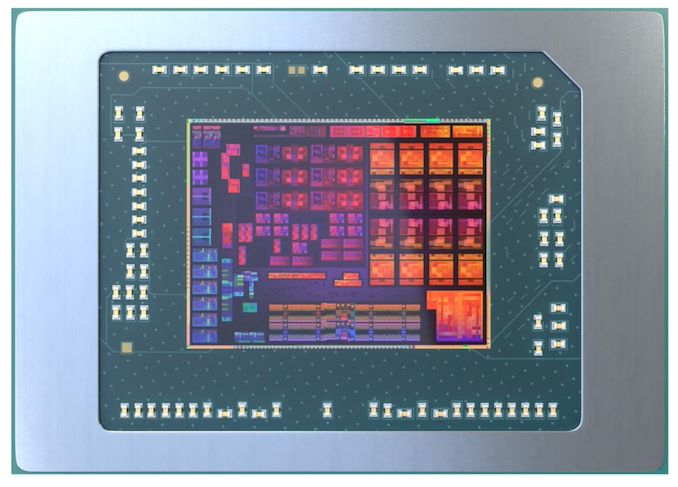 Fundamentally, the base CPU core is the same Zen3 microarchitecture as the previous generation. Clock for clock, AMD is expecting Zen3+ to behave the same as Zen3 in raw performance output/IPC, with the changes being solely at the power level. Fundamentally AMD is saying that a number of the libraries used in the design were power-optimized, while still keeping a high-frequency capability. Normally a power-optimized design kit offers low power and low area at the expense of frequency, so in reality AMD is finding what it considers to be a more optimal point in that spectrum.

With this being a mobile chip, a lot of context here is on power saving and responsiveness when in-and-out of sleep. The concept of keeping cores at a low idle power, or moving to sleep when idle, is all in aid of enabling a device with a long(er) battery life. For example, if a core is idle for a few seconds, would it be better to put in a sleep state? This isn’t just idle frequency, but actually turning parts of the core off in a specific order – and then how and when those parts are turned back on, which has a power cost all of its own – ultimately leading to working smarter in order to conserve power usage.

On the SoC side of power matters, AMD is showcasing that Rembrandt has better control over the internal Infinity Fabric power states, better global ‘almost off’ power states, support for LPDDR5, DRAM self-refresh, panel self refresh support, support for sub-1W panels, and accelerators to help come back out of sleep states, some of which we’ve mentioned. 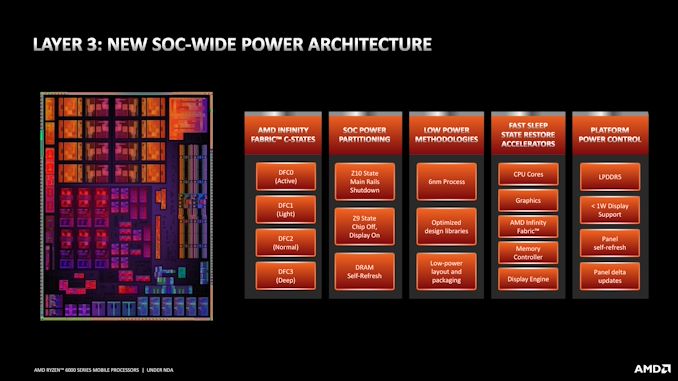 On the firmware and software side, AMD is aiming to make Rembrandt a better transitional experience from being connected to power to being a mobile platform. Normally Windows relies on internal power plans for ‘Balanced’, ‘High Performance’, or ‘Battery Saver’ – sometimes OEMs even have their own unique power plans on top of their own software. From AMD’s perspective, they want users to have the benefits of both High Performance and Battery Saver without having to manually adjust these power plans. Which brings us to AMD’s new Power Management Framework, or PMF.

PMF is an extension of a lot of previous notebook inputs, outputs, and controls – taking data from sensors such as skin temperature, but also SoC power, OS workloads, display information, noise profiles, then converting that into a ramping power profile that can offer anything from battery saver to high performance on a sliding scale. 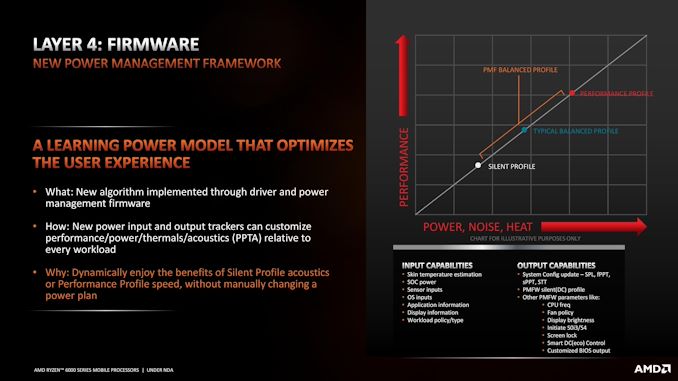 The key here is that graph – normal Windows offerings have those individual three points, whereas AMD Rembrandt, on select optimized systems, will enable by default a scalable profile that will move up and down the graph depending on external factors. When speaking to AMD, they said that this would be baked into the firmware and automatically enabled when running in the Windows-standard Balanced Profile. User can manually select other profiles to force into those modes, but Balanced Profile will be the PMF sliding scale.

Users will not be able to disable PMF, but more than that, AMD states that it is up to the system vendor to announce if they are using PMF or not. Given that it's likely that few (if any) of them will bother to make that disclosure, I think this is somewhat of a frustrating decision – we can’t test this without a lever to disable it, whereas end-users won’t know if their system even has it or not.

Finally, AMD lists its updates for Rembrandt in the display power section of the chip. As we move to more efficient processors coupled with high-resolution, high refresh rate panels, the power consumption of the panel is becoming a major factor. But part of it is down to the SoC inside.

We’ve already mentioned Panel Self Refresh, the ability for a panel to update only the section that has actually changed from frame to frame, but AMD is saying that they can also do this with Freesync enabled. On top of this, Freesync allows the refresh rate during video fullscreen playback to be reduced to the native framerate of the video (e.g. 23.976Hz), thus saving power. The sub 1-watt panel support means that AMD has a list of validated panel vendors that can provide lower power panels (typically 1080p at 300 nits) for long battery life designs. Physically the new chip also implements new SVI3 regulators, which AMD claims provides a faster and more discrete control over the voltage required from the chip.

On top of this is the graphics engine itself, Rembrant moves from a Vega 8 solution to an RDNA2 solution, offering more performance and better efficiency. This extends to AMD A+A Advantage support as well, offering advanced power control when paired with an AMD discrete graphics solution. 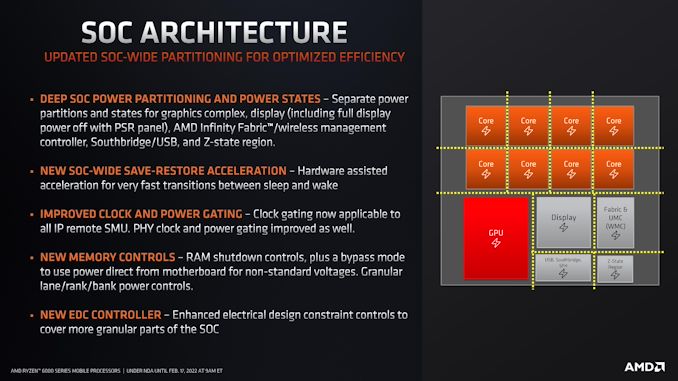 In short, everything about the new chip is about control: going to sleep, and waking from sleep as quickly as possible.

Overall, we’re getting to a point in the laptop space where the vendors are now competing against each other on actual power consumption. Historically we would talk about U-series mobile processors at 15-28 watts, and then H-series at 45-65+ watts. In 2022, Intel has introduced P-series at 28 watts instead, and both companies are stating that due to improvements in design, the chassis that used to fit a 15-watt processor can now enable a 28-watt version.

As a result, we’re seeing some really awkward comparisons if you go by official numbers. Both AMD and Intel are comparing last-generation 15-watt solutions to current-generation 28-watt solutions, or comparing 28 watt systems today against equivalent designs that housed other processors before. Be careful when reading those first-party data points. That being said, both companies also want to exhibit their notebook processors at their best, so we end up with the higher-powered H series anyway in some nice chonky designs. It won’t be until reviewers can get their hands on the regular, run-of-the-mill U/P series hardware that they'll be able test like-for-like in the same way.

For the initial review, AMD shipped us the ASUS Zephyrus G14, one of the recent generation flagship models that are updated year-on-year with the latest hardware. We still have the G14 that was shipped with the Ryzen 4000 Mobile (Zen 2) series, although for the Ryzen 5000, AMD went with the ASUS Flow X13, which is a more ultraportable design. The G14 is still in that bracket with a slightly larger screen, slightly beefier discrete graphics, and a bit more battery. There’s even an AniMe Matrix display on the back. 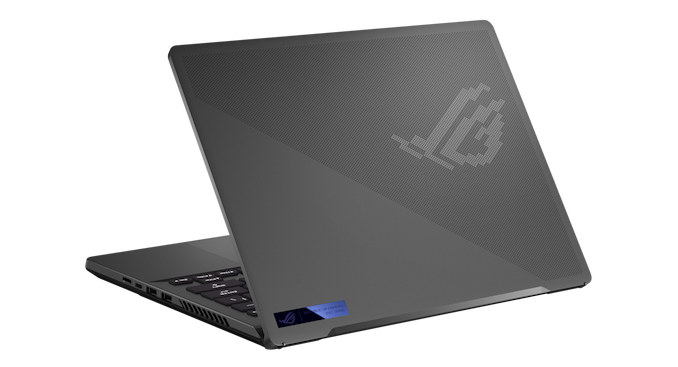 AMD has paired each of these designs with the HS-branded processors. The HS models are tuned and optimized parts that AMD co-calibrates inside flagship notebook designs with its partners, so it becomes the obvious choice for AMD to sample laptops based on these chips for each launch for review. Not only that, depending on the thermal design of the laptop, the actual power setting provided by the vendor can change based on the design. We’ve had the following in for test:

As with most laptop processor launches, despite the rated TDP on the official processor listing, it’s up to the OEMs to configure and tune the exact performance to the cooling on each unit. This makes comparisons, aside from simply ‘chip vs chip’, quite difficult, as simply adjusting the processor frequency (rather than any other frequencies) has a direct impact on any IPC or performance-per-watt comparison. As a result, we rely on end-performance numbers based on the CPUs as shipped – but we’ve also tested the 6900HS in 35W mode just to see the difference. 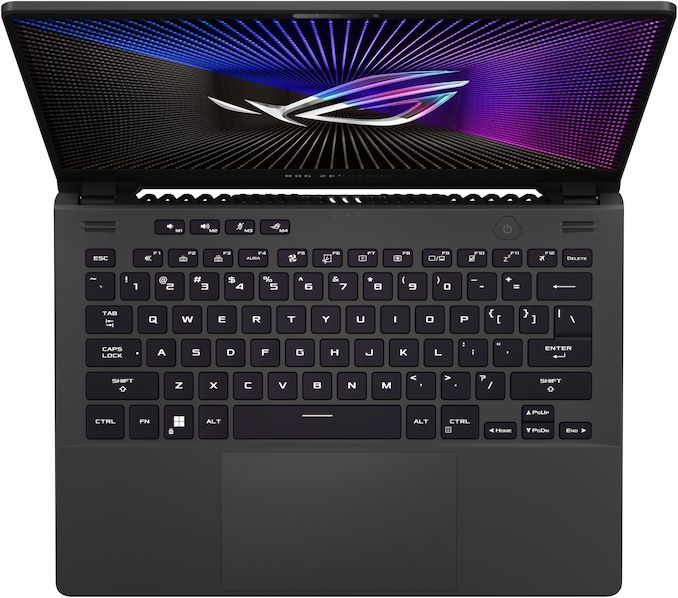 The other big factor in our ASUS Zephryus G15 is going to be the DDR5 memory. As we’ve seen on other platforms, moving to DDR5 can cause a variety of changes in performance for both CPU and gaming – it depends how memory bandwidth dependent the tests were. This is even more true for AMD, given that the memory frequency is also tied into the infinity fabric frequencies inside the processor. Over time AMD has disaggregated the two, but there’s still a level of synchronicity involved with additional dividers, meaning that memory frequency is still an important factor.