The processors used in the MateBook 16 are the latest Zen 3 based AMD Ryzen Mobile parts that exist as part of AMD’s H-Series range. The H-series, both on the side of AMD and Intel, typically run with a 45 W thermal design power (TDP) by definition, although depending on the mobile device being used, the manufacturers can adjust that TDP either up or down, given the desired cooling, performance, and battery life.

Typically the TDP setting of a mobile processor isn’t just a ‘suggestion’ as with some of the desktop hardware: the power limit imposed by the TDP comes up very quickly after a few seconds of heavy loading, or even straight away for the slimmest of designs that are not designed for high thermal hotspots. As a result, we’re in a situation where looking at the processor name on a laptop or notebook means next to nothing for performance, and instead we need to look at the power use in a variety of scenarios. One day I hope that laptop vendors will list the configured power window for the processors they have tuned, but I don’t see it coming any time soon.

In this case, Huawei is using the Ryzen 7 5800H in our MateBook 16 unit: an 8-core, 16-thread processor with Vega 8 graphics. It has a nominal thermal design power of 45 W, but Huawei has configured it to run at 35 W. When run in this mode, the turbo frequencies are usually the same as the higher power mode, but when the system clamps on the maximum power, the all-core frequency is reduced to get to that level. The added bonus of this, aside from maintaining comfortable thermals on the device, is also that the processor runs nearer its peak efficiency point.

Huawei further spices it up by offering a PERFORMANCE mode. If the laptop is plugged into the wall with its 135 W charger, performance mode can be activated which allows individual cores access to the full 35 W. In all-core use, we see that the turbo time is increased, keeping the whole processor at 35 W for longer. The goal here is extra long-term performance, which we see in our testing in benchmarks that are long and compute-heavy, although we fail to see much benefit in gaming or day-to-day tasks.

To showcase this, we start with a traditionally heavy workload in Prime 95. 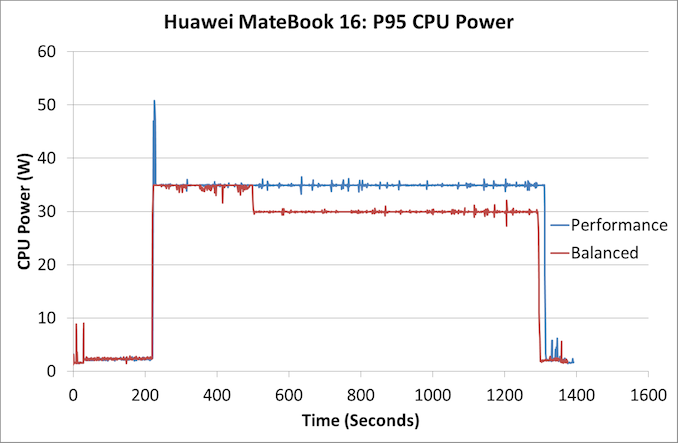 In this test, the Performance mode spikes at 52 W when the test begins, but then very quickly comes down to 35 W, which it continues all the way to the end of the test. By contrast, in the default balanced mode, we get 35 W for about 3 minutes, and then the processor scales back to 30 W.

Interestingly enough, we don’t see the same issue in Handbrake: 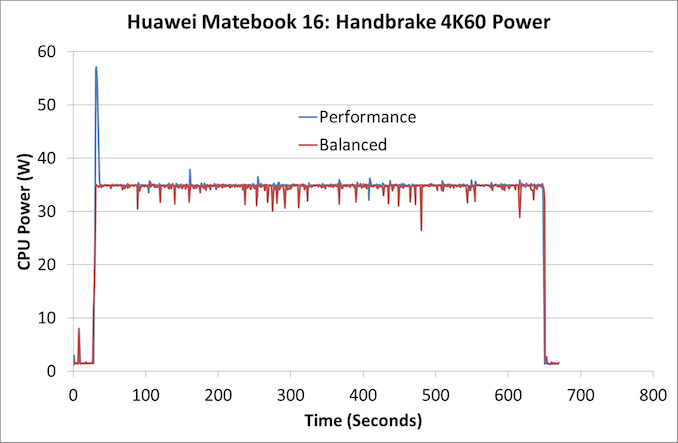 In this case both processors perform equally for the duration of the test, staying at 35 W, except for that initial 57 W spike when in performance mode. The test in this case took an identical amount of time to complete.

Agisoft is one of my tests that is more varied in the threaded workload, with a mix of all-core and single core tasks, and we see a can see a considerable different in the performance between the two modes. 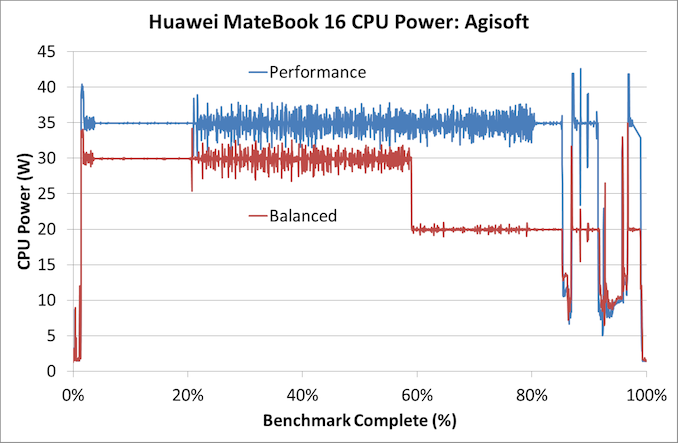 I’ve adjusted the x-axis to % of benchmark complete, because the Performance mode completes the test about 6% quicker.

Here we see that the Performance mode stays at 35 W for most of the test, until the last 15% which is more single-threaded. The Balanced mode gets knocked back almost immediately to 30 W, before reducing further to 20 W. The whole test takes around 20 minutes, and the Balanced came down to 20 W around the 14-minute mark.  But overall, the performance mode was quicker, at the expense of extra power.

The MateBook 16, regardless of which model you buy, will come with 16 GB of DDR4-3200 and a 512 GB NVMe SSD inside. The storage in our laptop is a Samsung PM981a, which is the same PCIe 3.0 x4 drive that Huawei has been putting inside its laptops for at least two generations, if not three. It’s still a good performer, and compared to the 1 TB version we saw in the MateBook X Pro in our previous review, it is a tiny bit faster. 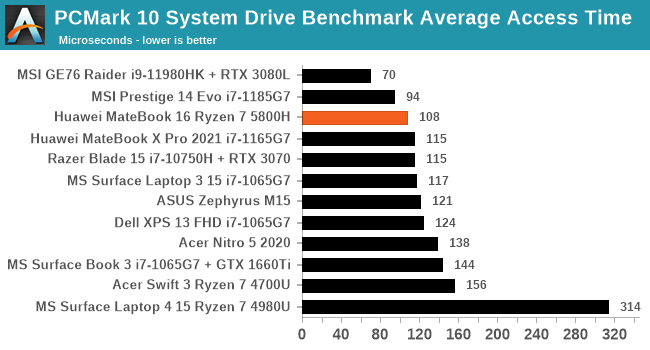 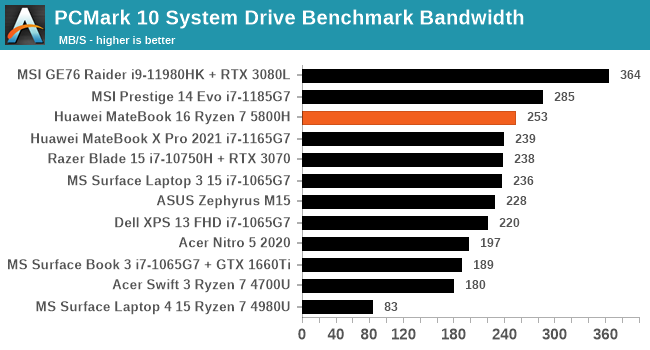 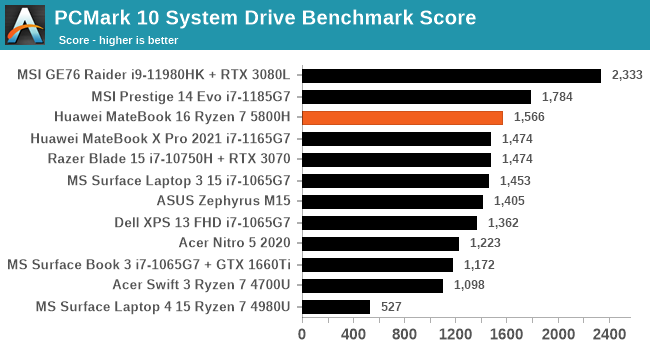 While Huawei continues to use the lowest SKU of the respective stack, such as the lowest Core i7 in the Core i7-1165G7 for the MateBook X Pro and the lowest Ryzen 7 for the Ryzen 7 5800H in the MateBook 16, there isn’t much reason for them to use anything other than the PM981a, as it remains a good drive.