Back in July, we reported that EVGA was teasing its first AMD-based motherboard since the AM2+ days. Fast forward to now, and that dream of an EVGA model for AMD's Ryzen processors led by in-house engineer and extreme overclocker Vince 'KINGPIN' Lucido is now a reality. The EVGA X570 Dark benefits from a large premium 17-phase power delivery (14+2+1) designed for pushing Ryzen 5000 to its limits and support for up to DDR4-4800 out of the box across two memory slots to minimize latency.

The EVGA X570 Dark, as expected, is primarily suited to extreme overclockers, with a variety of performance-enhancing features across the large E-ATX sized PCB. One of the most notable design characteristics includes a transposed AM4 CPU socket for better support when mounting an LN2 (liquid nitrogen) pot, and an empty CPU socket area to minimize risks when insulating for sub-ambient cooling. All the major power connectors are also at right angles, to be less of an issue when extreme overclocking for records. 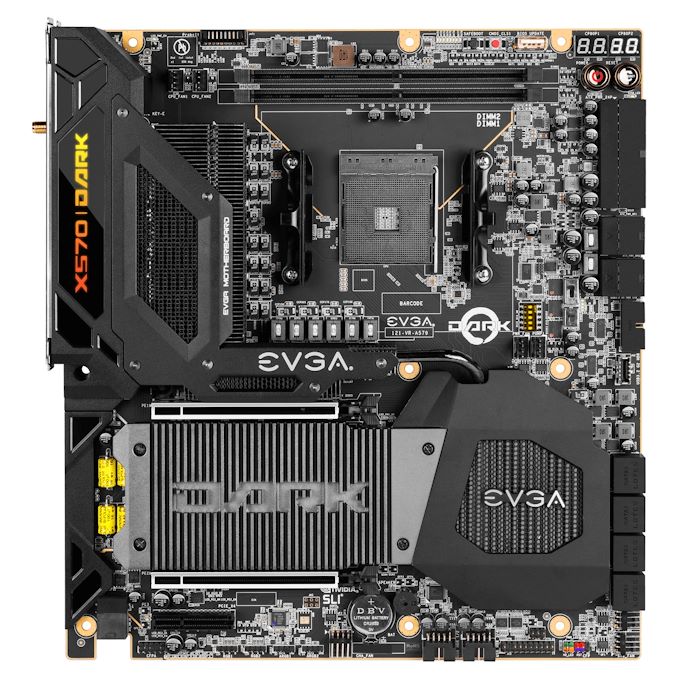 EVGA uses a 16-phase power delivery organized into a 14+2 configuration, with fourteen premium 90 A power stages for the CPU section. It's a slightly different design to accommodate the transposed socket as it stretches around the bottom of the AM4 socket. It is using active VRM cooling with two cooling fans and uses a 10-layer PCB design. The 17th power stage is for the memory. Providing power to the CPU is a pair of 8-pin 12 V ATX CPU power inputs. Some of the most notable features of the EVGA X570 Dark include voltage monitoring points at the top of the board, as well as a variety of switches to enable/disable features that might be critical to sub-zero overclocking stability.

The EVGA X570 Dark is currently available to purchase directly from the EVGA website for $690. This isn't a cheap motherboard, but overclocking-focused motherboards such as this come at a hefty premium. Although it has plenty of features for a daily Ryzen 5000 based system, the hope is that it provides the substance for extreme overclockers looking to push Ryzen 5000 silicon to its limits.

Our review of the EVGA X570 Dark will be coming very soon - it arrived a couple of days ago and is currently on our testbed!