Intel had provided detailed updates on Thunderbolt 4 in mid-2020 before releasing it in Tiger Lake-based products. As peak bandwidth (40Gbps) didn't get an upgrade over Thunderbolt 3, many consumers just considered it a branding update. In fact, under the hood, the specifications were being fine-tuned to bring in some features from the USB world. It is these new features that Plugable is focusing on:

The TBT4-40G2M (active) and TBT4-40G1M (passive) are Intel-certified Thunderbolt 4 cables, priced at $59 ($49 after coupon application) and $34 ($29 after coupon application) respectively. The pricing premium is due to increased certification costs (the factory is required to get random manufacturing lots repeatedly tested for Thunderbolt 4 cables, compared to only the initial manufacturing run previously).

These cables complement the Thunderbolt 4 flagship from Plugable - the Goshen Ridge-based TBT4-HUB3C. The JHL8440 Goshen Ridge controller used in the hub is a quad-port solution - one upstream, and three downstream ports. 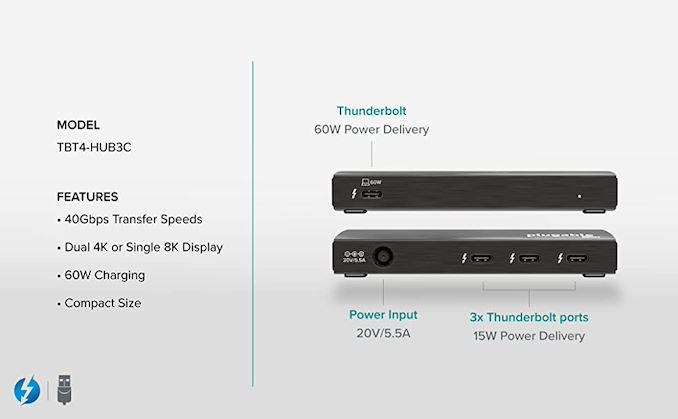 The TBT4-HUB3C comes with a 0.8m passive Thunderbolt 4 cable, a 110W power brick, and a bundled USB-C to HDMI adapter supporting resolutions up to 4Kp60 with HDR. The main hub itself is quite tiny compared to the power brick, measuring just 118 mm x 18 mm x 73 mm. Despite the small size, the unit has a solid look and feel with its brushed finish. The hub tips the scales at 201g, light enough to be considered pocketable. 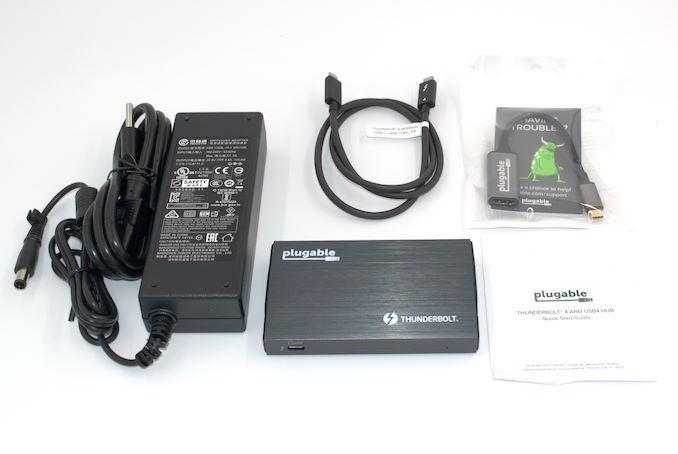 Plugable also bundles a USBC-HDMI adapter (USB-C male to HDMI 2.0 female converter supporting DisplayPort Alternate Mode from the USB-C side) with the package. The intent is to route the incoming display signals from the host to one of the downstream Thunderbolt 4 ports, and then on to a HDMI monitor. This also brings out the benefits of the hub scheme - With daisy chaining no longer in the picture for most deployments (each spoke in the hub can still be a daisy chain in Thunderbolt 4), users do not need to worry about the placement of different Thunderbolt peripherals / displays in the chain. Additionally, it allows the peripherals to be disconnected independent of each other - something not possible in the chain topology without interrupting the links to peripherals intended to be kept active.

The number of use-case scenarios for Thunderbolt 4 hubs such as the Plugable TBT4-HUB3C are too many to count. Our performance evaluation is restricted to the configurations specified below. The upstream port of the TBT4-HUB3C is connected to the Thunderbolt 4 port of the ASRock Industrial NUC BOX-1165G7 - a risky choice, given that the port is only certified for USB 3.2 Gen 2 / DisplayPort Alternate Mode. The downstream ports were connected as per the list below.

The Thunderbolt Control Center can be use to approve connected devices. All primary connections to the Thunderbolt port (other than the displays and associated routing gear) are visible in it. 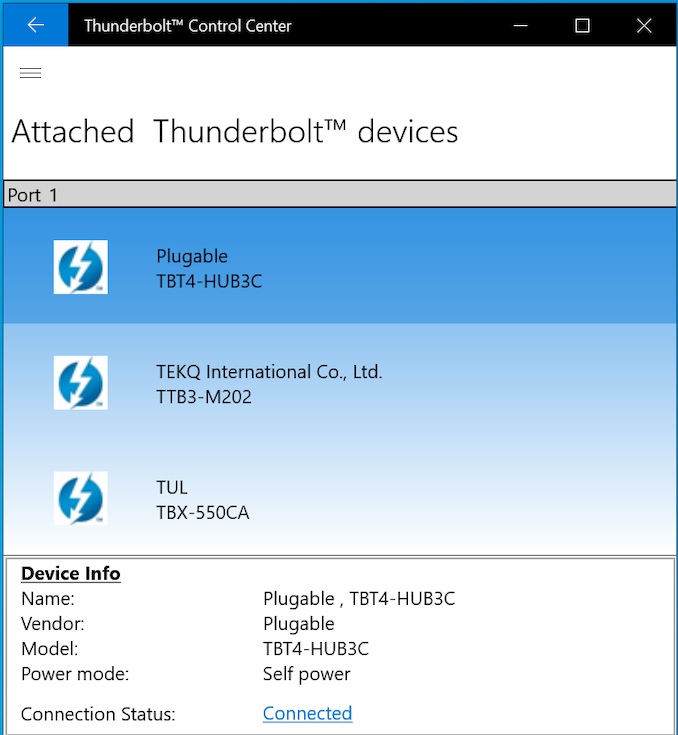 Various workload combinations were processed to determine the real-world effects of bandwidth sharing between the peripherals connected to the hub. The DIY Thunderbolt 3 SSD was subject to a fio workload, while the eGPU in the Gaming Station was subject to an OpenCL bandwidth test (transferring data from the host to the device VRAM, and back).

It can be observed that activating the display output link reduces performance for the host-to-device traffic from 20.57 Gbps to 13.78 Gbps, while total used bandwidth on the host to device side moves up from 20.57 Gbps to 28.5 Gbps. On the return side, the maximum bandwidth seen turned out to be 22.11 Gbps.

Investigation of 5K display outputs from the hub's downstream port, and its bandwidth implications will be covered in future reviews.

The Plugable TBT4-HUB3C brings out the capabilities / advantages of Thunderbolt 4 over previous Thunderbolt versions in an effective and user-friendly manner. The hub functionality brings Thunderbolt and traditional consumer understanding of USB functionality to the same table, and this can only be good for the market as USB4 begins to gain traction.

The TBT4-HUB3C is able to support 40 Gbps in total over the three downstream ports without favoring one port over the other. While we evaluated a number of interesting use-cases involving displays, Thunderbolt SSDs, and eGPUs, the possibilities enabled by the hub are much more varied. With backwards compatibility - we even tested functionality of the device as a USB 2.0 hub when connected to a USB 2.0 port - in the picture, it can be safely said that the hub's functionality is limited only by the features of the upstream host port. 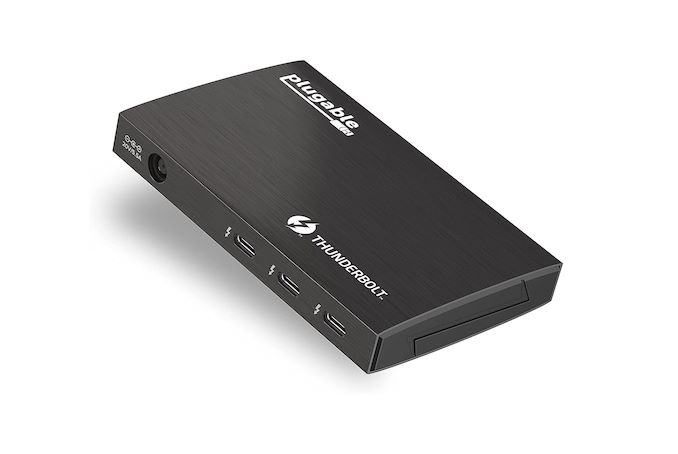 At $174 (after applying a $15 off coupon on the $189 MSRP), the hub presents a great value proposition in this space. Plugable is a bit late to the Thunderbolt 4 market, as other Goshen Ridge solutions have been available in the market for a while now (though supply chain issues have meant that actual availability has been limited). All the Thunderbolt 4 hubs / docks use the quad-port JHL8440 to full effect, enabling one upstream Thunderbolt 4 port, and three downstream Thunderbolt 4 ports. For $230, the CalDigit Thunderbolt 4 Element Hub tags on additional USB 3.2 Gen 2 ports. Razer has two docks - a 10-port version with a SD card slot, audio jack, an Ethernet port, and three USB 3.2 Gen 2 ports for $320, and a RGB version of the same for $330. The Kensington SD5700T priced at $330 is similar to the Razer dock, but with an additional USB-A charging-only port.

The closest competitor to the Plugable TBT4-HUB3C is actually the OWC Thunderbolt Hub that has a similar form-factor and ports layout. It does have a USB 3.2 Gen 2 Type-A port in addition for its $179 price point. Despite undercutting the OWC unit by $5, Plugable has managed to include a $20 value addition in the USBC-HDMI adapter. Overall, Plugable has an effective entry-level Thunderbolt 4 product bound to expand market adoption and understanding of the latest Thunderbolt 4 and USB4 ecosystem. We look forward to the company expanding its offerings and create a TBT4 lineup similar to what they currently carry for Thunderbolt 3.