The UEFI firmware used on all of the three ASRock Z590 boards we have reviewed so far has been consistent in design other than subtle changes to the GUI, such as color. In fact, the firmware on the Z590 OC Formula is visually identical to that used on the ASRock Z590 Taichi. The Z590 OC Formula GUI consists of a black background, yellow accents, white text, and grey, denoting which option is currently selected. There are also two different modes for users accessing the firmware, the EZ mode for novice users and the Advanced mode for the more experienced. 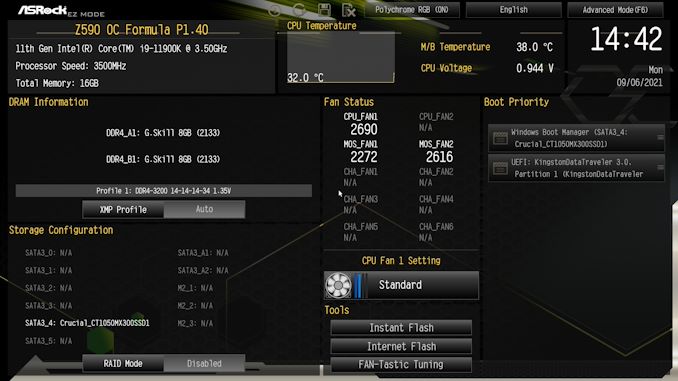 The EZ mode, which is the initial splash screen when users first enter the BIOS, includes a basic list of information and settings related to the system. The top left-hand corner is a list of information based on the processor installed, with the default CPU core frequency and the total combined memory capacity installed. Below is a list of the memory installed, including a panel for users to click to enable X.M.P 2.0 profiles on compatible memory. In the center panel is a list of installed fans, including fan speed in RPM, with a small panel below this to allow users to select between the different fan profiles such as standard, silent, and full-speed. Users can adjust and select the boot priority from a simple and intuitive list of storage installed on the right-hand side. 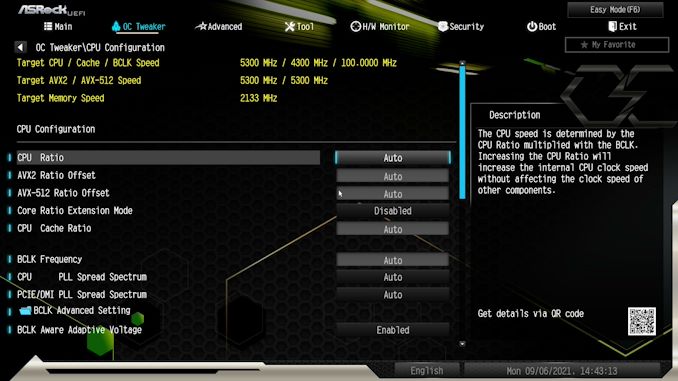 Users can access the Advanced section of the firmware by pressing the F6 key. In the Advanced mode, users will find all of the board's overclocking, chipset, and power-related settings. The overclocking settings can be found within the OC Tweaker section, and ASRock has three different submenus for the CPU, DRAM, and voltages. On the main page, users can enable the LN2 preset designed and tested by Nick Shih himself, but regular users should avoid using this as it is designed purely for extreme overclockers. There are plenty of options for overclocking the CPU, including core frequency, cache frequency, BCLK frequency, and AVX offsets which allows for better stability when using a workload using one of the heavier instruction sets.

Users can also make numerous memory tweaks aside from enabling X.M.P 2.0 profiles on compatible memory kits. This includes extensive memory latency options as well as frequency tuning. Users looking to run higher than DDR4-3600 memory will need to switch to Gear 2 of Intel's new geared memory controller. As expected on a motherboard designed for overclockers, there are many voltage options to select from, which is necessary when performing extreme overclocks with sub-zero cooling methods. 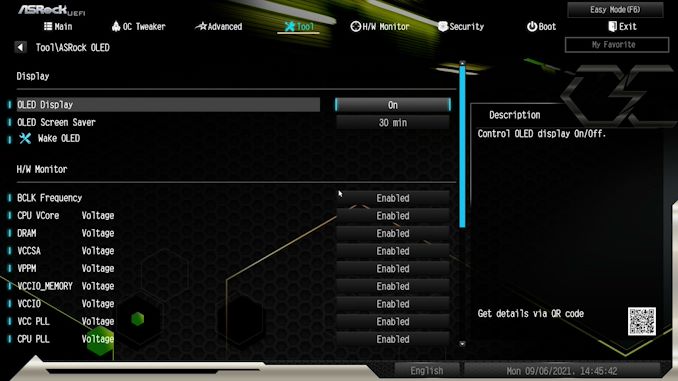 A new feature on the ASRock Z590 OC Formula is an OLED panel customizer which is located within the firmware. The OLED panel provides real-time telemetry data from various sensors such as the CPU, temperature, and voltage sensors located within the circuitry. Users can enable or disable certain elements that are displayed and customize the OLED screen saver time or disabled it altogether.

Other useful parts of the firmware include ASRock's FAN-Tastic tuning, where users can customize fan profiles on the eight 4-pin headers. Users can also customize the board's integrated RGB LED lights via the ASRock Polychrome RGB tab, although the software included does offer more elements and lighting settings. Overall, ASRock's OC Formula BIOS is consistent with other ASRock firmware we've seen so far on Z590, and we found it responsive, intuitive. It has plenty of options for overclockers to sink their teeth into.

ASRock provides much of the same core software with the Z590 OC Formula as it does with its other Z590 models, but it includes slightly more intuitive overclocking software. This is expected given the board's overclocking pedigree, although the majority of the software orbits around the ASRock Live Update and App Shop. 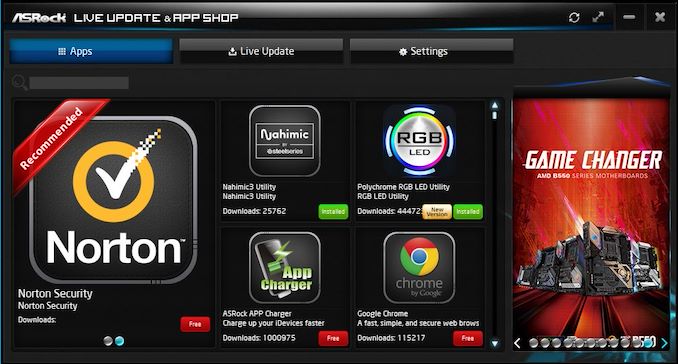 The ASRock Live Update and App Shop allows users to not only update all of the board's drivers to the latest versions, but it allows users to install each of the software utilities compatible with the OC Formula. Software available to download includes the Nahamic 3 Utility, which allows customization of audio settings, the Polychrome RGB LED utility for customizing the board's integrated RGB LED lighting, and the Formula Drive software. 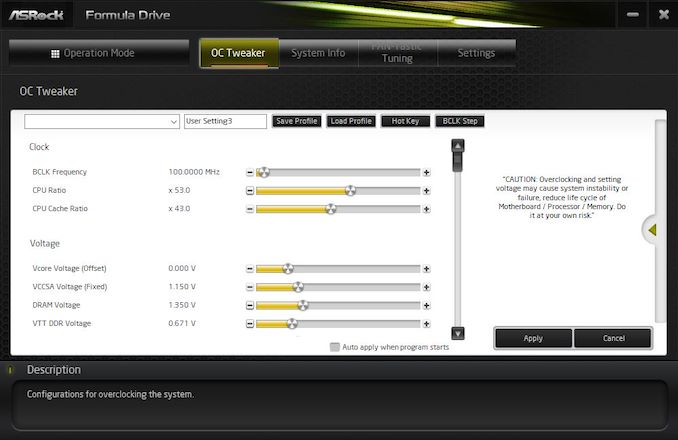 Looking closer at ASRock's OC Formula Drive software, it's basically a renamed A-Tuning utility we've seen from previous ASRock motherboards. It provides the functionality for users to overclock the processor within Windows without needing to enter the BIOS. We would like to point out that the CPU VCore control within the Formula Drive utility is based on an offset of the CPU VCore, and not a custom variable, so we recommend users preferring not to calculate the desired CPU VCore to overclock within the firmware. The Formula Drive software also includes a handy system information tab containing many details about frequencies, voltages, and fan telemetry. At the same time, the FAN-Tastic tuning section allows users to customize the aggressiveness of fan curve profiles. 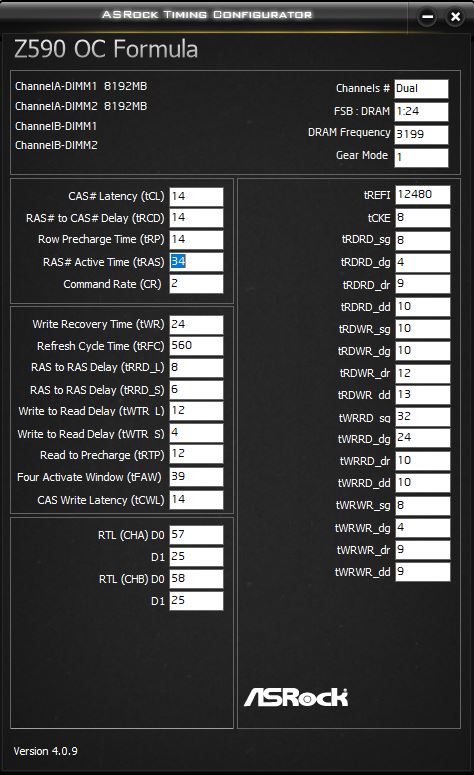 Another handy piece of software designed specifically for extreme overclockers is the ASRock Timing Configurator. This allows users to tweak and change memory latency timings within Windows in real-time.

Overall the software included with the ASRock Z590 OC Formula is everything a user should need, including the ASRock XFast LAN utility for traffic shaping, the Nahimic 3 audio control software, as well as ASRock's Restart to UEFI software which allows users to enter the BIOS upon restarting the system at the click of a button.