An executive visiting various research divisions across the globe isn’t necessarily new, but with a focus on social media driving named individuals at each company to keep their followers sitting on the edge of their seats means that we get a lot more insights into how these companies operate. The downside of posting to social media is when certain images exposing unreleased information are not vetted by PR or legal, and we get a glimpse into the next generation of technology. That is what happened today.

Day 1 with the @intel Israel team in the books. Great views…incredible opp to see @GetThunderbolt innovation …a validation lab tour and time with the team…can’t wait to see what tomorrow brings! pic.twitter.com/GKOddA6TNi

EVP and GM of Intel’s Client Computing Group, Gregory Bryant, is this week spending some time at Intel’s Israel R&D facilities in his first overseas Intel trip in of 2021. An early post on Sunday morning, showcasing Bryant’s trip to the gym to overcome jetlag, was followed by another later in the day with Bryant being shown the offices and the research. The post contained four photos, but was rapidly deleted and replaced by a photo with three (in the tweet above). The photo removed showcases some new information about next-generation Thunderbolt technology. 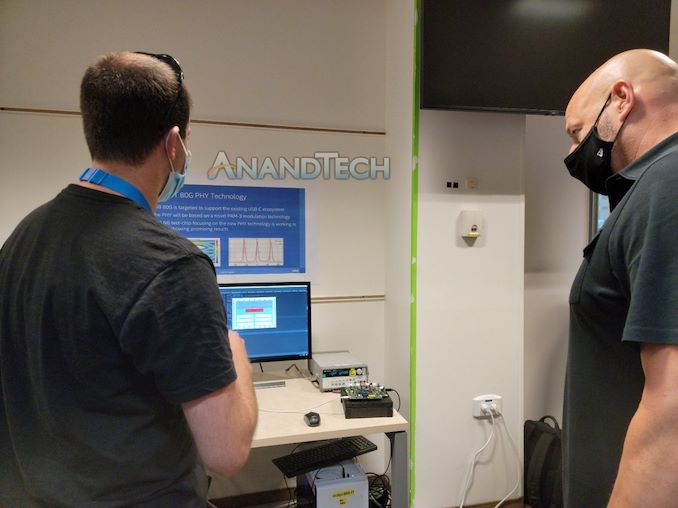 In this image we can see a poster on the wall showcasing ‘80G PHY Technology’, which means that Intel is working on a physical layer (PHY) for 80 Gbps connections. Off the bat this is double the bandwidth of Thunderbolt 4, which runs at 40 Gbps.

The second line confirms that this is ‘USB 80G is targeted to support the existing USB-C ecosystem’, which follows along that Intel is aiming to maintain the USB-C connector but double the effective bandwidth.

The third line is actually where it gets technically interesting. ‘The PHY will be based on novel PAM-3 modulation technology’. This is talking about how the 0 and 1s are transmitted – traditionally we talk about NRZ encoding, which just allows for a 0 or a 1 to be transmitted, or a single bit. The natural progression is a scheme allowing two bits to be transferred, and this is called PAM-4 (Pulse Amplitude Modulation), with the 4 being the demarcation for how many different variants two bits could be seen (either as 00, 01, 10, or 11). PAM-4, at the same frequency, thus has 2x the bandwidth of an NRZ connection.

When we compare NRZ to PAM-3 and PAM-4, we can see the rate of data transfer for PAM-3 is in the middle of NRZ and PAM-4. The reason why PAM-3 is being used in this case is to achieve that higher bandwidth without the extra limitations that PAM-4 requires to be enabled.

PAM-3 has similar limitations to NRZ.

The final line on this image is ‘[something] N6 test-chip focusing on the new PHY technology is working in [the lab and] showing promising results’. That first word I thought was TSMC, but it has to be about the same width as the ‘The’ on the line above. So it doesn’t look like I’m right there, but N6 is a TSMC node.

Intel’s goal with Thunderbolt is going to be both driving bandwidth, power, and utility, but also right now it seems keeping it to the USB-C standard is going to be a vital part of keeping the technology useful for users who can fall back on standard USB-C connections. Right now Intel’s TB4 is a superset that includes USB4, so we might see another situation where TB5 is ready to be a superset of USB5 as well, however it seems that USB standards are slower to roll out than TB standards right now.

Special thanks to David Schor from WikiChip for the tipoff.