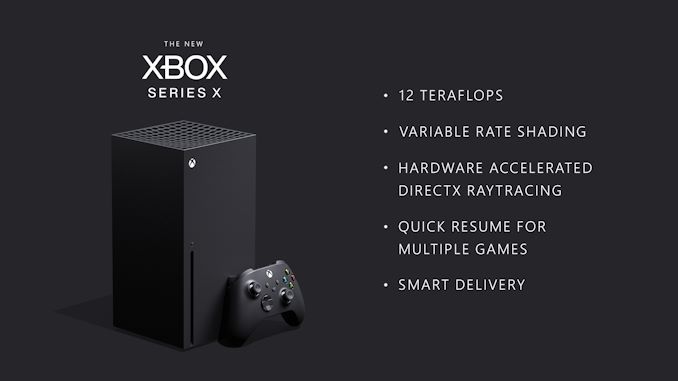 When the console was first formally announced at the end of 2019, the company revealed that it would be using AMD’s Zen 2 CPU cores, but they were a bit cagier about the GPU specifications. Now the company has opened the door just a bit more on those, giving us some performance and feature information – and by and large confirming earlier theories about what the hardware would entail.

First and foremost, Microsoft is now confirming that the console’s APU is using AMD’s RDNA 2 architecture for the integrated GPU. Information about this architecture is still limited, but AMD previously disclosed that RDNA 2 would include hardware ray tracing functionality – something not present in RDNA (1) – and Microsoft in turn will be tapping this for their next game console. Microsoft, of course, already has significant experience with hardware ray tracing thanks to DirectX’s own ray tracing functionality (DXR), so the company will be able to hit the ground running here, albeit with AMD hardware for the first time. 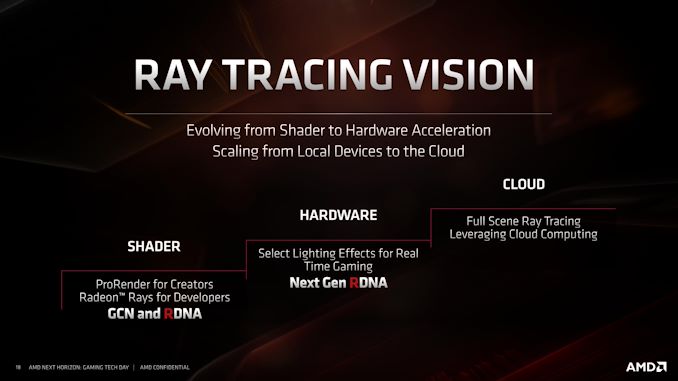 Microsoft’s announcement also confirms for the first time that we’re getting Variable Rate Shading (VRS) support. This is another feature that has been supported in DirectX for a bit now (and in rivals Intel & NVIDIA’s GPUs), but isn’t currently available in AMD’s RDNA (1) lineup. A sampling optimization of sorts, variable rate shading allows for the shading rate for an area of pixels to be increased or decreased from the normal 1:1 ratio. The net impact is that an area can be oversampled to produce finer details, or undersampled to conserve resources. As the former is more of a niche use case for VR, we’re far more likely to see undersampling in day-to-day usage. Especially with complex pixel shaders, when used correctly VRS is intended to give developers a way to improve the performance of their games for little-to-no perceptible impact on image quality.

Even at just 2x the performance of the Xbox One X, this is by all objective measures quite a bit of GPU horsepower. To put things in perspective, AMD’s current fastest RDNA-based video card, the Radeon RX 5700 XT, only offers 10 TFLOPs of GPU performance. So the Xbox Series X, a device with an integrated GPU, is slated to offer more graphics performance than AMD’s current flagship video card. Which, to be sure, doesn’t mean the Xbox Series X is going to be more powerful than a PC (there’s no getting around the fact that AMD has been trailing NVIDIA here), but it’s clear that Microsoft has great ambitions for the console’s graphics performance.

Tangential to this, Microsoft has also finally confirmed that the console will support HDMI 2.1. This has long since been a given, as the time frame and Microsoft’s own resolution goals pretty much require HDMI 2.1 to begin with, but none the less we finally have confirmation. The company’s announcement also confirms that along with variable refresh rate support (first introduced on the Xbox One X), the console’s HDMI connection will also support HDMI’s auto low latency mode, which tells a display to switch to low latency mode. Depending on just how fine-grained Microsoft’s implementation is, there’s room here for nuance; for example only engaging low latency mode for gaming, but leaving it off when watching videos so that a display can apply extra processing.

Finally, while Microsoft had previously disclosed that the console would use a “next generation” SSD, it’s interesting to note that the company is now calling it a “custom built” SSD. Absent more details, I’d hesitate to read too much into this, but at a minimum it means Microsoft is not using an entirely off-the-shelf SSD. Whether that means they’re using commercial silicon with different firmware, or ordering their own silicon entirely, remains to be seen. And perhaps the bigger question is whether this is an all-flash setup, or if the console will be running some kind of tiered storage with an SSD and an HDD? Given that even when SSD prices were at their historical lows, a large enough SSD to hold several AAA games could easily run for $100 or more, a pure SSD setup stands to be an expensive venture.

But whatever the storage architecture is, it sounds like Microsoft is putting it to good use. On top of the previously mentioned loading benefits, the company is touting a feature they’re calling “Quick Resume”, which allows for several games to be suspended at once. Since suspending multiple games in this fashion all but requires evicting them from RAM and sending them to non-volatile storage, Microsoft will need a high performance (and reasonably spacious) SSD to power this feature.

As always, expect to hear a lot more about the Xbox Series X over the next several months, as Microsoft ramps up to launch it for Holiday 2020.