We have decided to change the format slightly for this edition of our optical storage roundup. DVD recorders are a lot like graphics cards in some respects; we can simply analyze which burners give us the fastest burn and read speeds, but that is only half of the picture. The other half of any optical storage analysis is the write and read quality. Although many burners have no problems burning a disc at 12X or 16X, reading them back (even in the same drive) doesn't work! Furthermore, if a burner only happens to write and read correctly on one particular type of media, we cannot recommend that as a stable, worthwhile product.

Thus, we attempted to answer these questions in a multipart analysis of many different types of media. First, we take the subject drive and write samples of test discs to several different media types. In the US, it is only common to see a few different types of DVDR media, almost all of which we have been tested in our analysis. We go out to retail stores before all of our analyses and buy media for the review. Almost all of our media is store-bought unless stated otherwise. The record speeds of all of these media are noted and displayed near the end of the analysis. We read the disc back in the same drive to make sure it wrote correctly. This read speed is also noted and placed into a chart at the end of our review.

After creating all of these media, we have to determine if they are useful or not. We read the media back in our highly recommended 12X Plextor PX-712A drive. This drive has the additional capability of reading back error data (our MediaTek drives also have this feature). Coupled with the Q-Tools software bundled with Plextor burners, we do two things: read the disc back to make sure it burned correctly, and use Q-Tools to determine how many errors the disc had. Both the read speed and the number of various errors are recorded and charted near the end of the analysis.

Since we record so much data, there are a lot of various graphs that need interpreting. Below is the graph of a poor write of one of our burners, with an explanation of what all the signs mean. 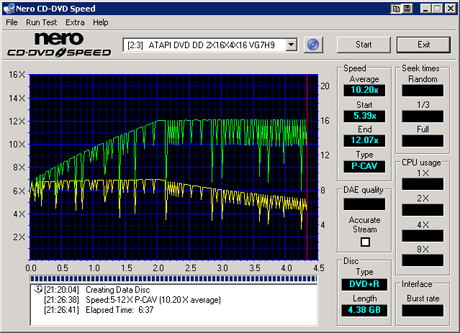 
You'll notice that the yellow line on the bottom is the speed of rotation as the disc spins. The green line on the top denotes how fast the disc is being written or read at. Generally, we look for spikes in the graph. Harsh spikes during a read generally indicate that the disc has a poor sector, and the burner is calibrating itself slower to read that particular segment better. Harsh spikes during a read may also indicate a poorly written sector; many burners calibrate speed down when they are starting to loose control of the burn. The exception to this is usually when a write spikes up and stays there - this indicates that the burner can write at a faster speed and is calibrating itself (usually in a step pattern) to do so. Drives that produce a lot of errors won't read back correctly - or at all.

After reading the disc, we run a test that actually counts the number of errors in the Q-Tools software from Plextor. A screenshot of what this software looks like is below. 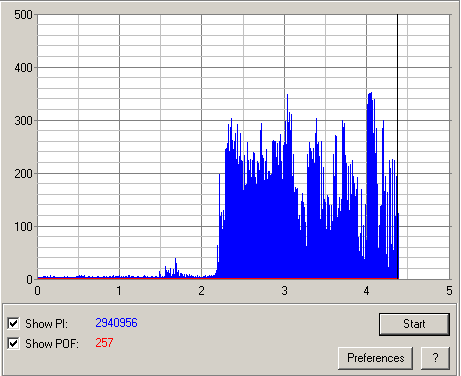 Here, we see a disc with a moderate number of errors. DVDs use the Reed-Solomon error correction algorithm that allows the drive to detect/correct errors. For DVDs, the graphs indicate parity errors. Although, the PO (parity outer) errors reported by Q-Tools generally refer to uncorrectable errors that will most likely render the disc unreadable if they exist in the double digits. PI errors are generally correctable errors, which are mainly troublesome when there are a large number of them. A disc with a few hundred PI errors is close to a "perfect" while one with a PI error count upwards towards a few hundred thousand general means the entire burn was horrible. These PI errors could result from low quality media with shallow scratches or, more often, a burner with bad media compatibility. Usually firmware updates can fix these issues.