Marvell at FMS 2019: NVMe Over Fabrics Controllers, AI On SSD 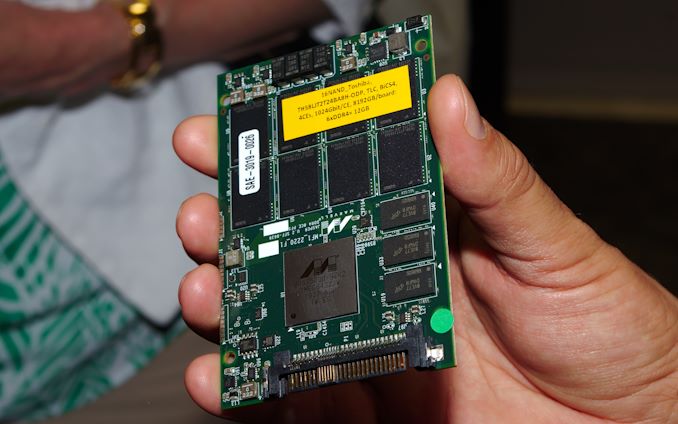 Prior to Flash Memory Summit, Marvell unveiled their first generation of client SSD controllers supporting PCI Express 4.0. During the show itself, their focus was much more on the datacenter. Marvell's recent history of buying and selling various business units has made it clear that datacenter networking is one of their highest priorities, and that's affecting their strategy for datacenter storage. They are strong proponents of the NVMe over Fabrics standard that is in the process of displacing all other SAN protocols.

Last year: NVMe to Ethernet converter on interposer board

Last year, Marvell announced an NVMe to Ethernet converter that allows an individual NVMe SSD to be connected directly to an Ethernet network, making the SSD accessible through NVMeoF. At first, this converter was demoed on small interposer boards that sit between standard U.2 SSDs and an Ethernet-capable backplane. This year, Marvell and Toshiba showed off a fully integrated Ethernet SSD that adds the Marvell 88SN2400 converter to Toshiba's existing SSD design. Mechanically, this drive appears to be a 2.5" U.2 or U.3 SSD, but electrically its host interface is a pair of 25Gb Ethernet links instead of four PCIe lanes. 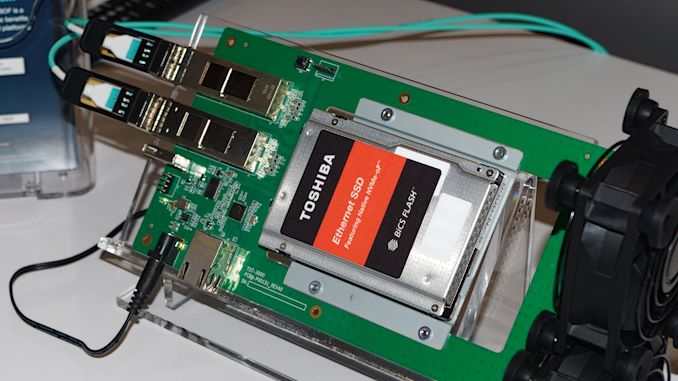 These drives have not been formally launched by Toshiba as a shipping product, but they were described as production-ready and were demonstrated in a 24-drive 2U Ethernet JBOF appliance built by Aupera. A typical NVMe JBOF either uses PCIe switches and external PCIe cabling to a few nearby servers, or it contains one or two x86 server CPUs, some PCIe switches from Broadcom or Microsemi and some RDMA-capable Ethernet NICs from Mellanox to provide NVMe over Fabrics functionality. The Ethernet JBOF ditches all of that for one of Marvell's own Ethernet switch ASICs.

Taking things to the logical next step, Marvell also announced a native Ethernet/NVMeoF SSD controller. The 88SS5000 is effectively their 88SS1098 NVMe controller with the PCIe interface replaced by the dual 25GbE interface used by the NVMe to Ethernet converter. This new single-chip solution for Ethernet-attached SSDs helps cut costs and power consumption, making the whole idea more palatable to datacenter customers. Marvell showed samples of this controller paired with 8TB of Toshiba 96L 3D TLC NAND and 12GB of DDR4 DRAM. 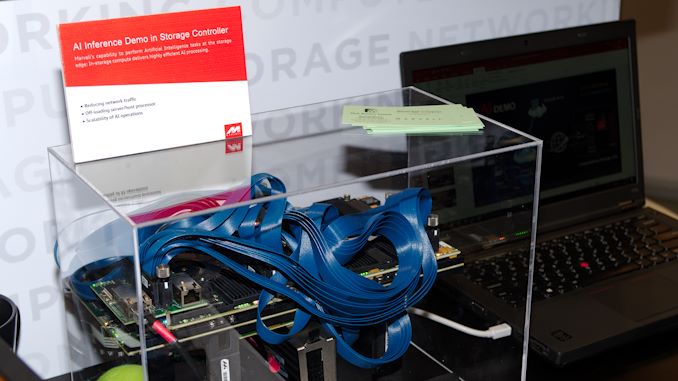 Machine Learning On The SSD

Looking further into the future, Marvell shared their take on the idea of Computational Storage—SSDs that do more than just store data. Marvell is working to integrate a Machine Learning engine into future SSD controllers, allowing inferencing tasks to be offloaded from CPUs or GPUs onto the SSDs that already store the data being processed. The hardware setup is basically the same mess of cables connecting FPGAs to Flash that Marvell has shown in previous years, but on the software side their demo has matured greatly. 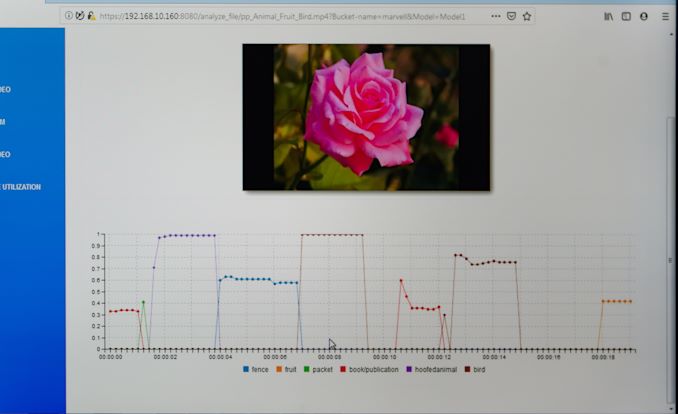 In addition to demonstrating realtime object recognition using a pre-trained model, Marvell now has a system to perform offline recognition on videos stored on the SSD. Their demo presented the results of this recognition as a graph showing which objects were recognized over the duration of a video. There was also a content-aware search engine that would return the segments of stored videos that depict the requested objects. For the demo, this functionality was exposed through a simple web interface. In production, the envisioned use case is to have an application server aggregating results from an array of content-aware SSDs that each perform some kind of analytics on their share of the overall dataset. 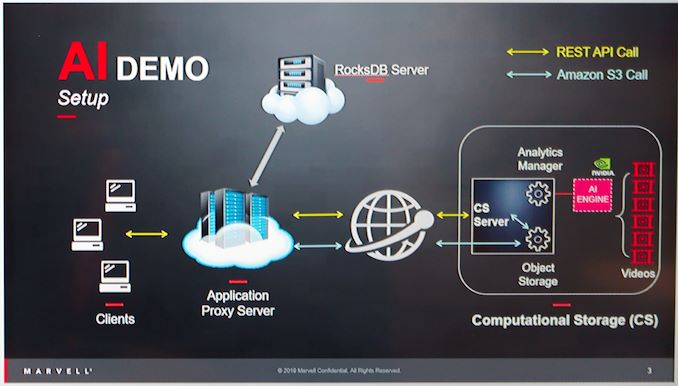