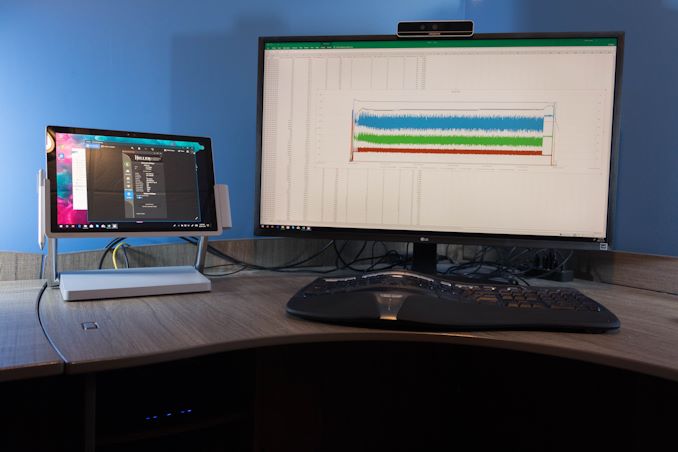 Earlier this year, Kensington announced their new docking station specifically designed for the Microsoft Surface Pro. The SD7000 transforms the Surface Pro into a miniature version of the Surface Studio, and offers some unique features as well.

Looking at the design and it is very clear where Kensington is getting their inspiration. The two chrome arms on the side are a definite nod to the Surface Studio, and with the grey base, Kensington has done a great job to match the aesthetics of Microsoft’s all-in-one PC. And like the Surface Studio, the display can be adjusted from an upright vertical stance for use as a desktop, or rotated down for use with the pen. It’s a very clever way to ensure that the Surface Pro doesn’t lose functionality when docked to a set of desktop peripherals.

There’s a magnetic mounting point on the left side to dock the pen when it’s not in use, and the right side features a slide-out Surface Connect port which is used to connect the Surface Pro to the dock. As this accessory is from Kensington, they also care about device security, and you can add-on an optional locking cable which locks the Surface Pro into the dock, and then locks the dock onto the desk. 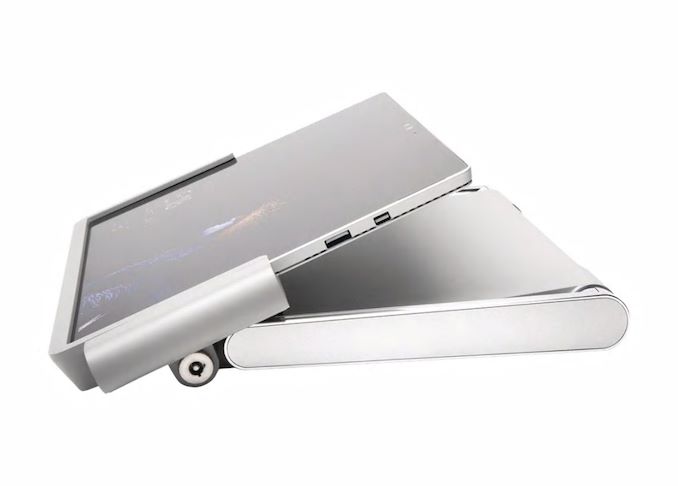 Since it uses the Surface Connect port, it of course doubles as charging, as well as data and video over the one connection. The SD7000 expands the Surface Pro connectivity by adding four USB Type-A ports, as well as one USB Type-C port. Since the Surface Pro doesn’t support USB-C natively, the ports are all Gen1 speeds of up to 5 Gbps, but the Type-C port can deliver 5V @ 3A for 15-Watts of power for attached accessories.

For video, the SD7000 offers both a HDMI connection as well as a DisplayPort connection. This allows connection of up to two external monitors, with a maximum resolution of UHD 3840x2160. Please be aware though that the Surface Connect port only has enough bandwidth for a single UHD resolution at 60 Hz refresh, so if two UHD displays are connected, they will have to be run at an undesirable refresh of 30 Hz. This is a limitation of the Surface Pro though, and not on Kensington.

There is of course a Gigabit Ethernet and 3.5 mm audio jack as well to complete the connectivity.

Overall the SD7000 works as expected, and works as well as the Microsoft docking station, but with more connectivity and of course the articulating hinge to make the tablet work better as a second desktop display. The dock is made out of plastic though, so it doesn’t match the feel of the Surface Pro’s magnesium alloy, even though it does match the color perfectly. 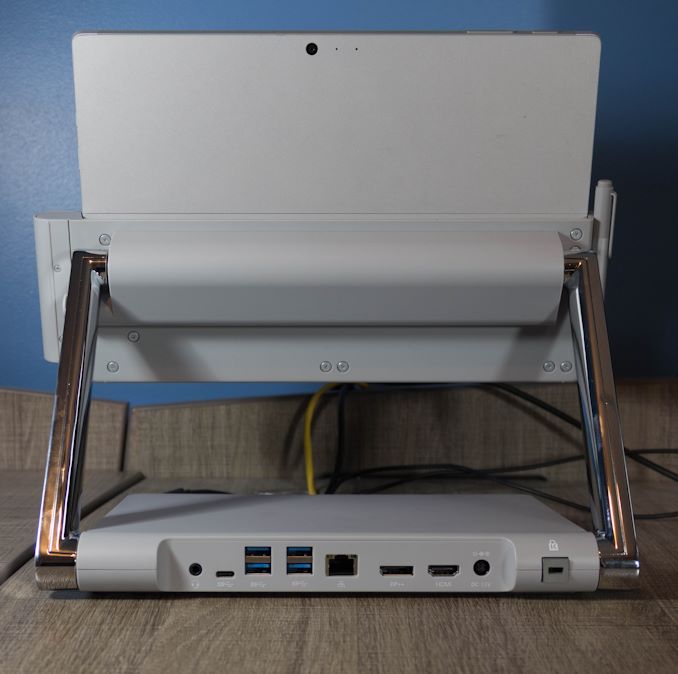 When docked and with the display raised to its maximum height, one drawback is that the display can’t be rotated to a complete vertical. Instead the display sits at about 70° when the arms run into the stop. It isn’t a huge deal though, since the display is still going to be slightly lower than any desktop display, so the angle helps with viewing. It’s just more of an aesthetics thing. In addition, the articulating arms aren’t quite stiff enough to hold the display anywhere you stop it. It is really meant to be used in just the up or down position. If they made them stiffer it would be difficult to move when you do want to angle it.

Ironically, despite the SD7000 offering far more connectivity than either the Microsoft Surface Dock, or the Surface Pro itself, it doesn’t offer any connections on the front, which would be handy in many situations. It would also be great to see a SD card reader slot on the front or sides, if a second generation comes along. By mimicking the Surface Studio design, they’ve also run into the same issues, where any front mounted ports would be blocked or contacted when the display is lowered, so it is understandable why they aren’t there, but they would still be useful. Luckily you can still get to the USB port on the Surface Pro itself to quickly hook up a USB drive or something similar. 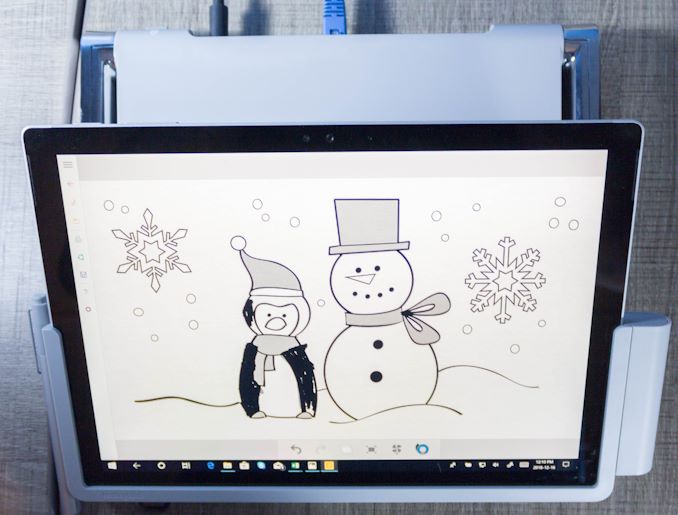 One final issue is that the dock can’t be used when the Type Cover is connected to the Surface Pro, for fairly obvious reasons. The downside here is that storing the Type Cover is now necessary, whereas the Microsoft dock lets you leave it attached because it’s just a cable to the external docking connections.

The SD7000 has a street price of $399, which is quite a bit more on top of an already expensive Surface Pro, but thanks to the better usability when docked, as well as the great connectivity, this is likely going to interest many people who want to extend the Surface Pro into a lightweight desktop.