The MSI MEG Z390 ACE Motherboard Review: The Answer To Your USB 3.1 Needs

The MSI MEG Z390 ACE is a full-sized ATX board and represents one of two of the companies enthusiast level Z390 options, the other being the very high-end Z390 Godlike.

The overall design of the MSI Z390 ACE is centered around the rear panel cover. Similar in looks to this is the chipset heatsink and an adjoining, but not quite connected, M.2 heatshield. The most notable element from the aesthetics is the Mystic Light Infinity RGB panel which is housed within the rear panel cover. This panel allows users to customize its color state due to RGB LEDs through the MSI Mystic Light RGB utility. On the board we get an all black design while the heatsinks and rear panel cover have a metallic grey finish. Users can add custom RGB with two 4-pin RGB LED connectors, a single 3-pin RAINBOW LED connector, and for users with a compatible Corsair products, a single 3-pin Corsair LED header. Touching more on headers, the MSI Z390 ACE has a total of seven 4-pin fan headers which are divided into three different areas; one dedicated for the CPU, one for a water pump or AIO and five for case fans. 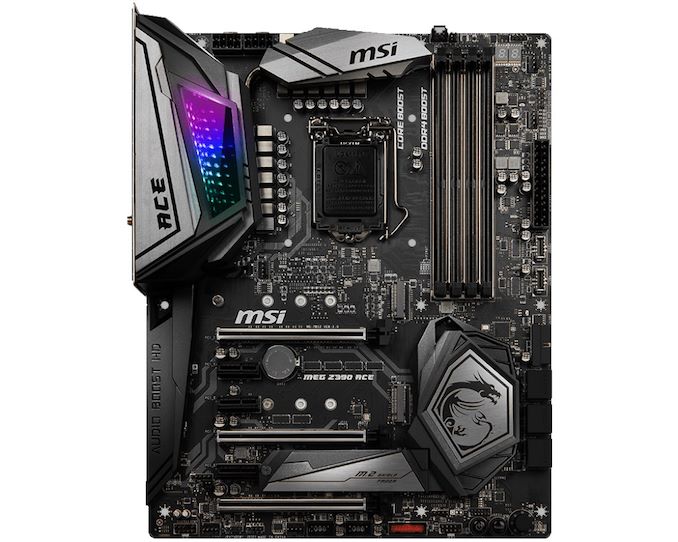 Taking up a large amount of PCB space on the bottom half of the motherboard are the alternating PCIe slots and M.2 slots. All of the full-length PCIe slots have additional reinforcement, while one of the slots has MSI's branded M.2 Frozr heatshield connected to the large chipset heatsink. The chipset heatink is surrounded with a wave of black plastic which helps it blend in with the rest of the design.

For the PCIe slots, there are a total of three full-length PCIe 3.0 slots which allow for two-way NVIDIA SLI and up to three-way AMD CrossFire. There are also three PCIe 3.0 x1 slots. 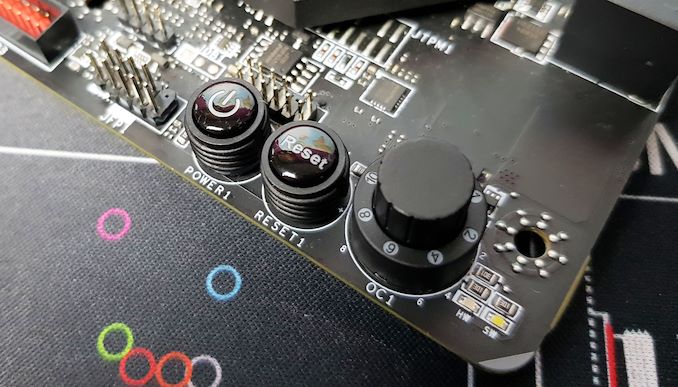 Located in the bottom right-hand corner is a 'basic overclockers toolkit'. This kit consists of a power switch, a reset switch, and a Game Boost OC dial which allows users to select between MSI's preset overclocking profiles. There are seven profiles in total which can be accessed by twisting the dial. Pressing the button enables this, but this can also be changed within the BIOS by clicking the appropriate visual representation of button. 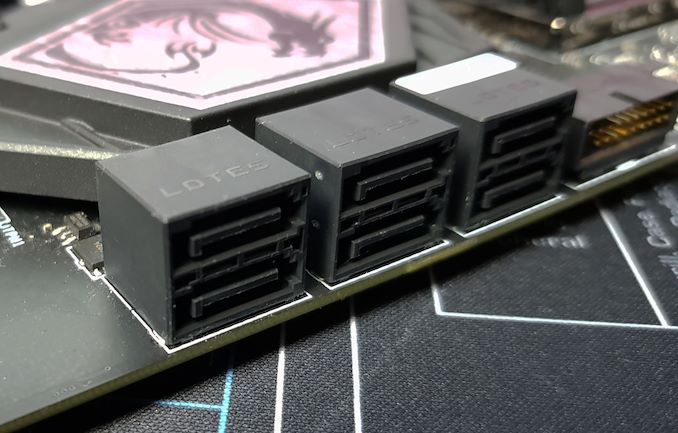 Storage options on the MSI Z390 ACE include SATA and M.2 connectivity. There is a total of six SATA ports which allow users to create RAID arrays including 0, 1, 5 and 10. The ACE is one of just two MSI Z390 models to include three M.2 slots. The top two M.2 slots (M2_1 and M2_2) support for both PCIe 3.0 x4 and SATA drives, whereas M2_3 only has support for PCIe drives. The M.2 slots support RAID 0, 1 and 5. The M.2 slots and the SATA ports do however share bandwidth between each other. The limitations are as follows: 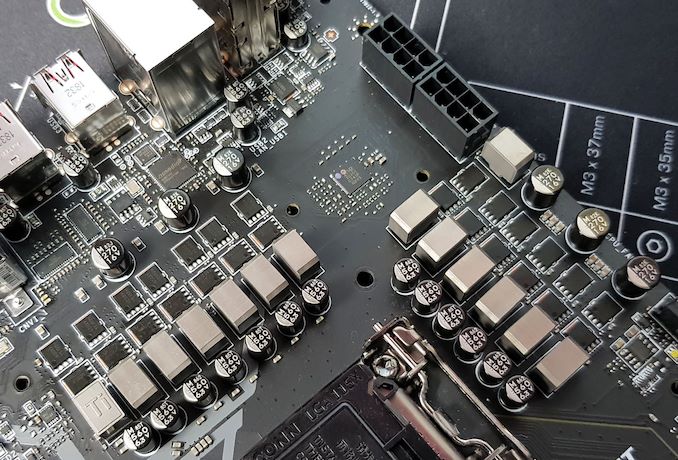 The power delivery on the MSI Z390 ACE is publicized as featuring a 13-phase setup optimized for use with the Intel Core i9 Coffee Lake processors including the eight-core Core i9-9900K ($550). Lifting off the heatsink reveals that this is consistent with what's advertised. A total of twelve ON Semiconductor ON4C029N high-side MOSFETs and twelve ON4C024N low-side MOSFETs make up the CPU VCore. The VCore on the MSI Z390 ACE motherboard also has six International Rectifier IR3598 doublers on the rear of the PCB which gives VCore an operational phase count of six. This is confirmed by the International Rectifier IR35201 PWM controller which is capable of operating up to eight channels. The power delivery of the MSI Z390 ACE is running in a 6+2 configuration. Providing power to the CPU is a pair of 8-pin 12 V ATX inputs to allow the board to draw more power to the CPU from the power supply when needed.

The memory has its own pair of ON4C024N low-side and ON4C029N high-side MOSFETs while the SoC has one ON4C024N low-side and one ON4C029N high-side MOSFET. The memory section also includes a Nuvoton NCT3101S low input voltage DDR termination regulator. The power delivery includes a total of thirteen inductors with one of them coming from Texas Instruments but is indistinguishable to determine which; the remaining twelve are marked with R40 which signifies an inductance of 400 nH and a current rating of 60 A per inductor. 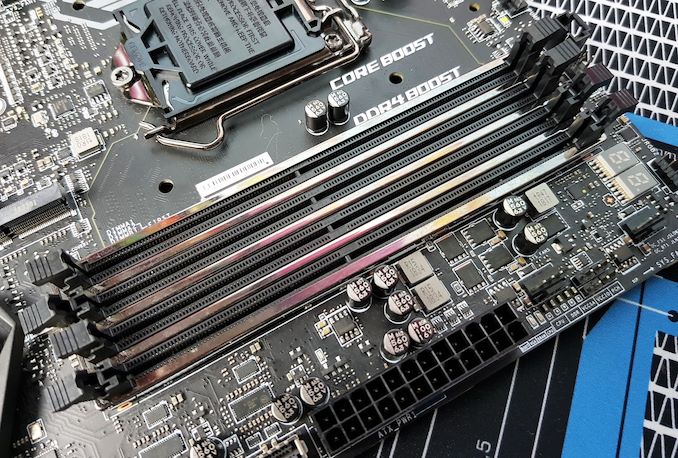 Memory specifications on paper look very high-end for enthusiasts as the MSI Z390 ACE has native support for up to DDR4-4500. The MSI MEG Z390 ACE has a total of four memory slots and allows users to install up to a maximum of 64 GB in total. On the slots, MSI has included a coating of Steel Armor and each slot has an installation clasp on either side for installation. 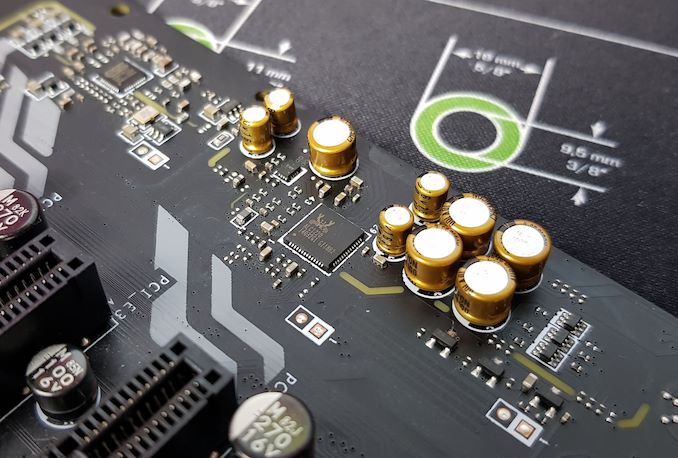 As with the majority of Z390 motherboards currently on the market, the MSI Z390 ACE uses a Realtek ALC1220 HD audio codec. In addition to this is an ESS Sabre 9018 32-bit DAC which offers support for up to 8-channels. Surrounding the audio is a total of nine Nippon Chemi-con gold audio capacitors with five of them being large and the remainder being small. The Realtek ALC1220 HD codec is covered by the tail end of the plastic rear panel cover but doesn't feature any EMI shielding or isolation. The audio PCB does feature a physical separation line from the rest of the PCB.

Handily located on the rear panel for easy access is a clear CMOS button and a BIOS Flashback+ button. Networking comes from the E2500 network port as well as the 2T2R Intel 9560 Wi-Fi 802.11ac Wave 2 module. It should be noted that MSI Z390 ACE has no video outputs. 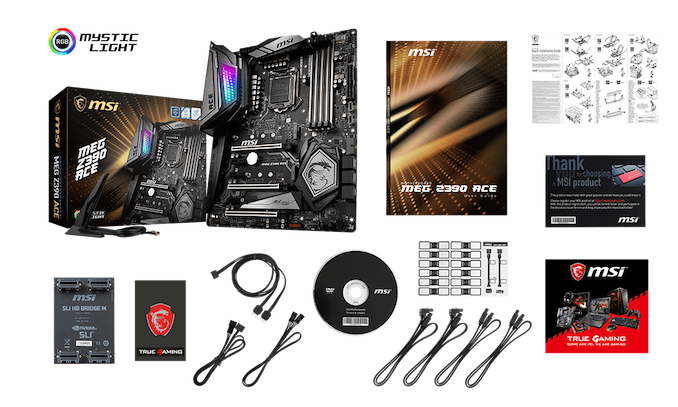 Bundled along with the MSI MEG Z390 ACE motherboard is a rather mediocre set of accessories given the commanded asking price of $290. The most noteworthy inclusions are an NVIDIA HB two-way SLI bridge, four SATA cables (two right-angled, two straight-angled) and a driver installation disc.