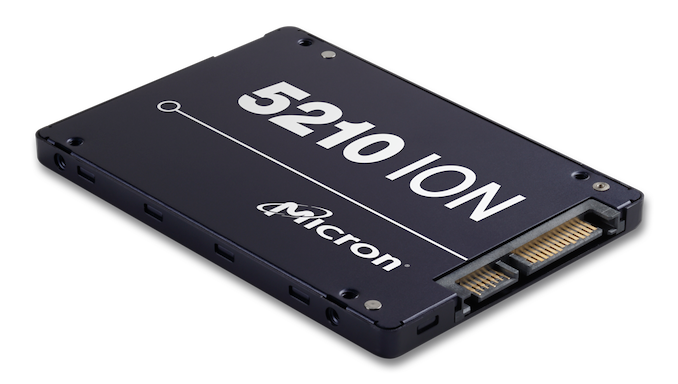 Micron's 5210 ION enterprise SATA SSD was announced in May as the first shipping SSD with four bit per cell (QLC) NAND flash memory, but until now it has only been available to Micron's largest customers and partners. Starting this week, the 5210 ION is getting a broad release that will include sales through online retailers. This means that we finally have concrete detailed specifications and prices for the 5210.

As originally announced, the 5210 ION is a fairly straightforward adaptation of the 5200 series TLC-based enterprise SATA SSDs to use Micron's new QLC NAND. The controller and most of the firmware are the same, and the change in flash memory brings lower cost, write endurance and performance. We now have a clear idea of just how big an impact the switch to QLC NAND makes on those specifications.

Micron's primary goal with the 5210 ION is to expand the market for their enterprise SSDs. Micron does expect some customers to replace some of their TLC-based enterprise SSDs with QLC drives like the 5210 ION, but they're more interested in going after the remaining market for 10k RPM hard drives. Micron believes that with the 5210 they finally have a SSD that is cost-competitive with high-end hard drives, while offering higher performance, density, and power efficiency. Write speeds are the biggest weakness of QLC NAND, but even the smallest, slowest 5210 model can sustain sequential writes at least as fast as a 10k RPM hard drive.

However, the 5210 has already proven to have broader appeal, and Micron has some large customers that are deploying it as replacements for 7200RPM hard drives or client TLC SSDs that were being used in datacenters. With a price similar to consumer TLC drives but firmware tuned for enterprise workloads, the 2TB 5210 is being rolled out to replace 1TB consumer SSDs in service with a major streaming media CDN. Serving up streaming video is an appropriately read-heavy, mostly sequential workload that allows the 5210 to saturate the SATA link as well as any drive, but with more consistent latency than client/consumer SSDs offer.

Micron also cites a system builder of servers for machine learning is migrating from 8+TB 7200 RPM to the 8TB Micron 5210 ION for storing the massive datasets involved. The 5210 is quite a bit more expensive than the hard drives, but the hard drives have been a serious bottleneck. The higher performance of the 5210 allows these systems to perform tasks like image classification 8x faster, greatly improving the utilization of the expensive compute hardware in those machines and lowering the total cost of ownership. Machine learning can be an extremely read-heavy workload for inference tasks when a large model is consulted repeatedly and only occasionally updated.

With the 5210 ION, Micron has adopted a workload-dependent write endurance rating system. The same drive can be rated for anywhere from 0.05 drive writes per day up to 0.8 drive writes per day depending on how much of the data written is sequential vs random, and whether it is small 4kB random writes or larger block sizes. By contrast, their Crucial P1 consumer QLC SSD still gets a single number rating of 0.1 DWPD. By giving a wide range of endurance ratings, Micron avoids having to label the 5210 with a single conservative rating that would make it look particularly fragile compared to TLC-based SSDs. It also encourages their customers to be more aware of the details of their workload when shopping for storage. A gradual increase in that kind of awareness has been an important enabler for the transition from MLC to TLC, and is the main reason for the decline of enterprise SSDs with 10+ DWPD endurance ratings. (Micron claims that last year, 75% of all enterprise SSDs sold were rated for 1 DWPD or less, and that percentage will continue to grow.)

The patterns in the write endurance ratings are not completely uniform across the product line. All three capacities top out at 0.8 DWPD for 100% sequential 128kB writes, and are rated for 0.2 DWPD for 16kB random writes. When random writes of 4kB or 8kB are involved, the larger models have lower DWPD ratings than the 2TB model, possibly reflecting differences in how the flash translation layer is tuned for different drive capacities. The worst case is for 100% 4kB random writes, where the 2TB model is still rated for 0.2 DWPD but the 8TB model is rated for just 0.05 DWPD—the larger drive can't actually handle more total TB of 4k random writes.

Micron is pitching the 5210 as best suited for workloads that are at least 70% sequential for their writes, which yields endurance ratings of at least 0.27–0.56 DWPD depending on drive capacity. There are plenty of datacenter workloads that fall within this range, and in particular, workloads that hard drives (10k or 7200 RPM) offer sufficient performance for are probably already heavily sequential.

While Micron has announced general availability this week, distributors like CDW are not expecting stock for another week or two but are listing their prices for pre-orders. CDW currently lists the 5210 ION for 21-24 cents per GB, compared to 25-28 cents per GB for the TLC-based 5200 ECO. Bulk pricing should be significantly lower, and retail pricing may also drop below 20 cents per GB when supplies improve.