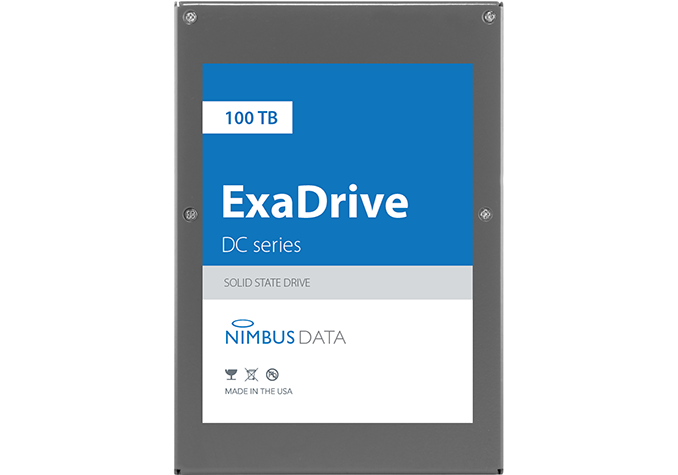 Nimbus Data on Monday introduced its new lineup of ultra-high capacity SSDs designed to compete against nearline HDDs in data centers. The ExaDrive DC drives use proprietary controllers and NAND flash in custom packaging to offer up to 100 TB of flash memory capacity in a standard 3.5-inch package. The SSDs use the SATA 6 Gbps interface and are rated for 'unlimited' endurance.

The Nimbus ExaDrive DC lineup will consist of two models featuring 50 TB and 100 TB capacities, a 3.5-inch form-factor, and a SATA 6 Gbps interface. Over time the manufacturer expects to release DC-series SSDs with an SAS interface, but it is unclear when exactly such drives will be available. When it comes to performance, the Nimbus DC SSDs are rated for up to 500 MB/s sequential read/write speeds as well as up to 100K read/write random IOPS, concurrent with most SATA-based SSDs in this space. As for power consumption, the ExaDrive DC100 consumes 10 W in idle mode and up to 14 W in operating mode. 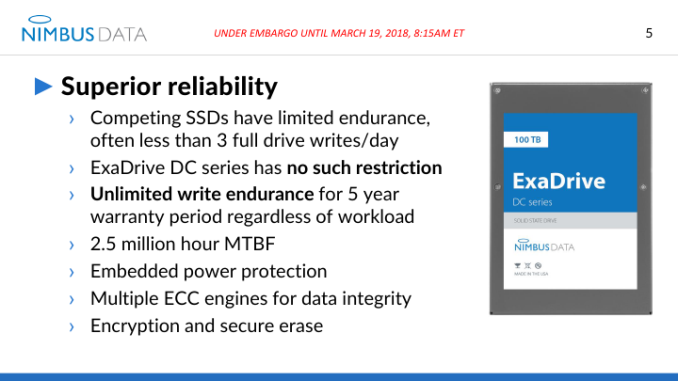 The ExaDrive DC-series SSDs are based on Nimbus’ proprietary architecture, featuring four custom NAND controllers and a management processor. The drives use 3D MLC NAND flash memory made by SK Hynix in proprietary packaging. Nimbus does not disclose the ECC mechanism supported by the controllers, but keeping in mind that we are dealing with a 3D MLC-based device, it does not need a very strong ECC for maximum endurance.

Speaking of endurance, it is worth noting that the 100 TB drive comes with an unlimited write endurance guarantee for the full five-year warranty period. This is not particularly surprising because it is impossible to write more than 43.2 TB of data per 24 hours at 500 MB/s, which equates to 43% of the 100TB drive. For those wondering, at that speed for five years comes to ~79 PB over the 5 year warranty of the drive (assuming constant writes at top speed for five years straight).

The drives support end-to-end CRC as well, with UBER specified as <1 bit per 10^17 bits read. 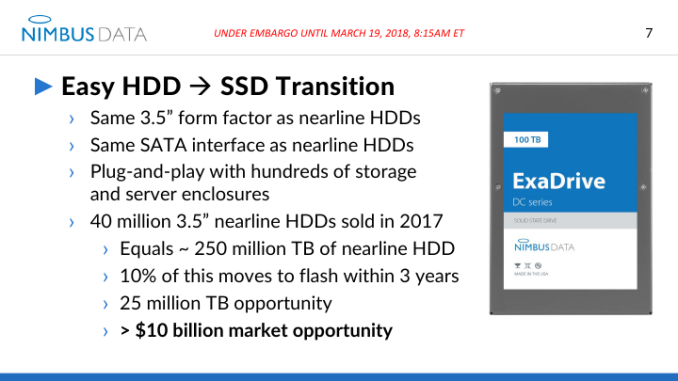 The Nimbus ExaDrive DC SSDs come in industry-standard 3.5-inch form-factor and are compatible with numerous SATA backplanes capable of supporting drives with at least 14 W power consumption. In particular, Nimbus Data says that there are "at least" three vendors of 4U90 chassis with proper thermal and power characteristics to support ExaDrive DC drives and the company has already qualified them. Keeping in mind that not all ultra high density enclosures can support 14 W drives because of power and cooling requirements, the ExaDrive DCs are not drop-in compatible with every application that use 3.5-inch hard drives today. So, if a datacenter operator wants to replace some of its high capacity HDDs with ultra-high capacity SSDs and maximize its storage per square meter density, it will need to use appropriate enclosures. In fact, Nimbus plans to announce high-density reference designs with enclosure partners in the coming weeks, but the company does not elaborate.

According to Nimbus, 40 million 3.5-inch nearline HDDs with an aggregate capacity of 250 million TBs were shipped in 2017. The company believes that 10% of newly sold nearline capacity will move to NAND flash within three years, which represents massive opportunities for high capacity SSDs like the ExaDrive DC. 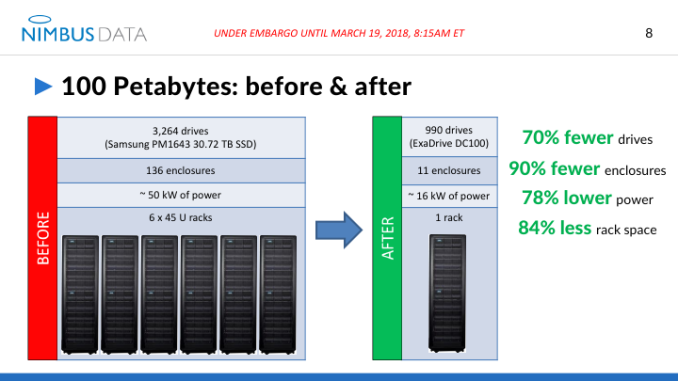 Nimbus has already begun sampling its DC-series SSDs with select customers. Commercial shipments are expected to begin this summer. Since Nimbus not only sells drives directly to its >200 clients, but also makes them available through its partners like Viking or Smart, and we expect other brands to offer products similar with the ExaDrive DC in the future. So far no formal announcements have been made. 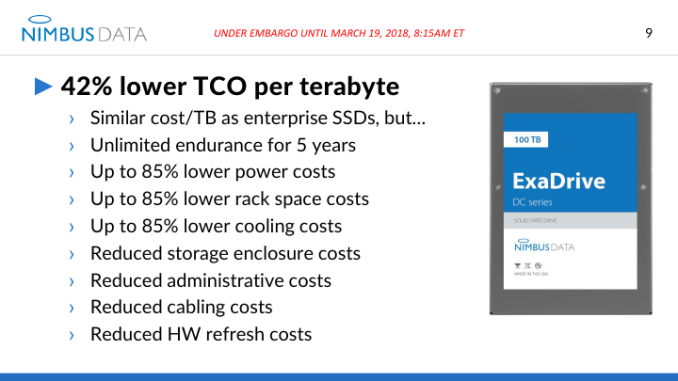 The manufacturer does not disclose pricing of the ExaDrive DC50 and DC100 SSDs, but only says it will be competitive. Keep in mind that since NAND flash pricing tends to fluctuate, only time will tell actual MSRPs of the ExaDrive SSDs when they ship this summer.