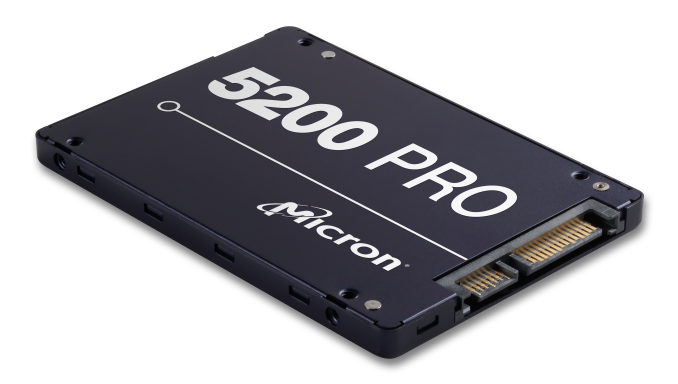 Today Micron is updating their enterprise SATA SSD family to use their 64-layer 3D TLC NAND flash memory. Aside from the new flash, the new 5200 series is almost identical to the 5100 series, but the broad range of options has been reduced to a more manageable quantity.

Where the 5100 series included three tiers of write endurance and overprovisioning—ECO, PRO and MAX—the 5200 only includes the ECO and PRO tiers, and the PRO tier has been pared down to just two capacities.

Micron says the most popular models in the 5100 series have been the 1TB and 2TB capacities. Demand in the larger 4TB and 8TB is being held back by two factors: a dearth of alternative 4TB and 8TB SATA options is dissuading buyers that want to ensure they have multiple suppliers, and many of the use cases for such large drives also require PCIe performance.

Micron has made the requisite firmware changes to support the new 3D NAND and they have made some minor tweaks to improve performance consistency, but otherwise the 5200 uses the same basic firmware architecture as the 5100.

Unlike the 5100 series, the 5200 series won't be available in the M.2 form factor. Instead, the 5100 series will continue to service the M.2 market and the low capacity 2.5" market until 2019. The demand in those segments is largely for boot drives, and being a generation behind doesn't have much impact on that use case.

The most significant spec changes are the write endurance ratings. The 5200 ECO has mostly increased the write endurance of at least 1 Drive Write Per Day, including almost double the endurance for the two smallest models. However, the largest 7.68 TB model is still rated for the same 8.4 PB (0.6 DWPD). On the PRO models, endurance has been greatly reduced, from 2.5 DWPD to 1.3-1.7 DWPD.

The 5200 announcement may seem to be an uninteresting update to an uninteresting product segment, but SATA SSDs still make up a majority of Micron's enterprise SSD sales. Micron is expecting PCIe SSDs to overtake SATA SSDs in the enterprise space this year, but demand for SATA SSDs isn't plummeting. In fact, overall volume is still increasing even as SATA market share falls, because the storage industry as a whole is experiencing strong growth. Enterprise SATA SSDs will remain a major part of Micron's storage business for at least another generation or two.