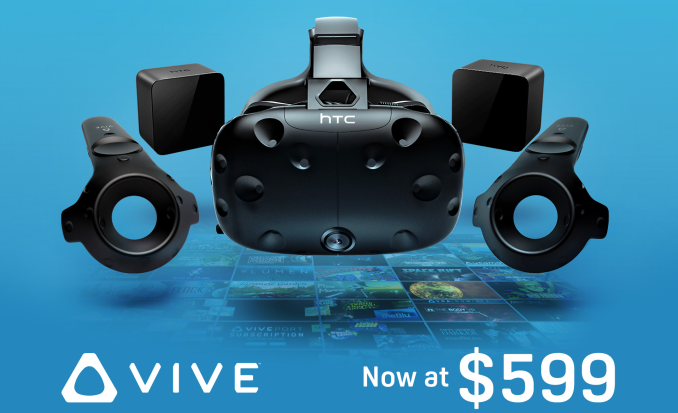 Vive purchases come with complimentary copies of Google’s Tilt Brush, EverestVR, and Richie’s Plank Experience. In addition, HTC offers a one-month free trial to Viveport Subscription, where customers pay $6.99 a month for up to five titles to play. HTC also points out upcoming Vive exclusives, such as Fallout 4 VR and Doom VFR. In the background is natural compatibility with SteamVR, as Valve co-developed the Vive with HTC.

Currently, the Rift + Touch bundle is still available at its $399 summer sale price. However, the Rift + Touch bundle does require an additional $59 third sensor to achieve room-scale tracking, whereas the base Vive kit accomplishes this natively. In the same vein, the Vive price drop has not affected the separate $99 Deluxe Audio Strap. As noted last October, the Rift Touch controllers are more akin to “halves of gamepads”, as opposed to the Vive wands. Beyond our first looks with both the Vive and the Rift, both setups still emphasize different aspects of the VR experience despite offering similar capabilities.

While HTC has lowered the Vive’s price to $599, the Vive remains in pole position with respect to high-end VR market share. A few months earlier, research firm SuperData outlined its expectation that the Vive would outsell the Rift by 200,000 units. Now, despite the recent Rift price cuts, SuperData observes that HTC is still shipping more Vive units, although the ‘Summer of Rift’ sale did make up some ground. In the near future, HTC has the Daydream standalone Vive and Vive Knuckles in the pipeline, with the China-only Vive Standalone already shipping.

Nevertheless, price reductions for both Oculus Rift and HTC Vive bring high-end VR a step closer to widespread adoption. And for consumers, these continued price drops are the best news yet.