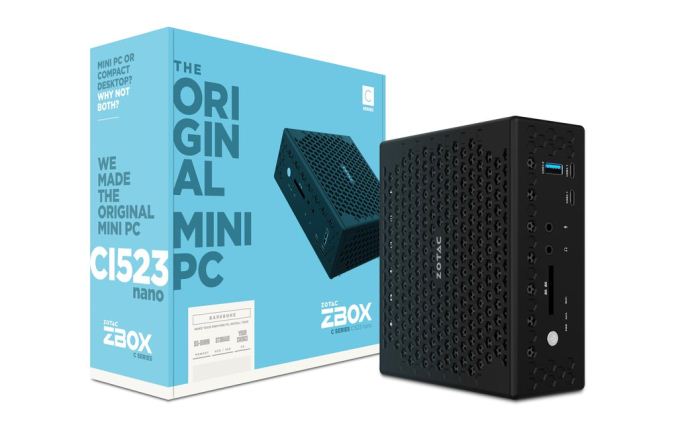 Passively cooled computing systems are popular amongst consumers worried about noise from fans and their associated maintenance requirements (particularly, for industrial use-cases). Traditionally, fanless high-performance PCs have come with a high price tag. However, with the focus on low-power Core-series CPUs by Intel, we have many vendors targeting this market segment with affordable models. Zotac started a new lineup of passively cooled ultra-compact form factor (UCFF) machines in the C-series back in mid-2014. Initially, the members of the series utilized either Atom-class or -Y series CPUs (with a sub-10W TDP). With Skylake, Zotac has re-engineered the design to accommodate 15W Skylake-U CPUs. This review focuses on evaluating the performance and thermal design of the Zotac ZBOX CI523 nano, a fanless NUC-style machine designed to go against the Intel NUC6i3SYH (based on the Intel Core i3-6100U).

Zotac's fanless C-series mini-PCs have been generally been well-reviewed and can be credited with bringing affordable passively-cooled high-performance computing systems to the average consumer. We reviewed the three different families in the first-generation - the Haswell-Y-equipped ZBOX CI540 nano, the AMD A6-1450-equipped ZBOX CA320 nano and the Bay Trail-M-equipped ZBOX CI320 nano. Out of these three, the Haswell-Y probably put the most stress on the thermal design with a 11.5W TDP / 6W SDP. However, our thermal stress test showed that the design was able to handle that without any hiccups. With the latest C-series announced in tandem with other Skylake mini-PCs, Zotac has gone in for a slightly larger and heavier solution to handle the higher TDP of the Skylake-U series. In order to maintain affordability and price-competitiveness against the corresponding actively-cooled Intel NUC, Zotac has opted for DDR3L SO-DIMM slots (instead of DDR4) and support for 2.5" SATA drives only (no M.2 slot).

The Zotac ZBOX CI523 nano comes in a barebones configuration as well as PLUS configurations. The latter includes a single RAM stick (one slot left empty for future upgrade by the end user) and a SSD. We were sampled the barebones configuration. In order to complete the build, we used Corsair's Vengeance DDR3L 2133 MHz 2x 8GB kit and a 500GB Crucial MX200 SSD. 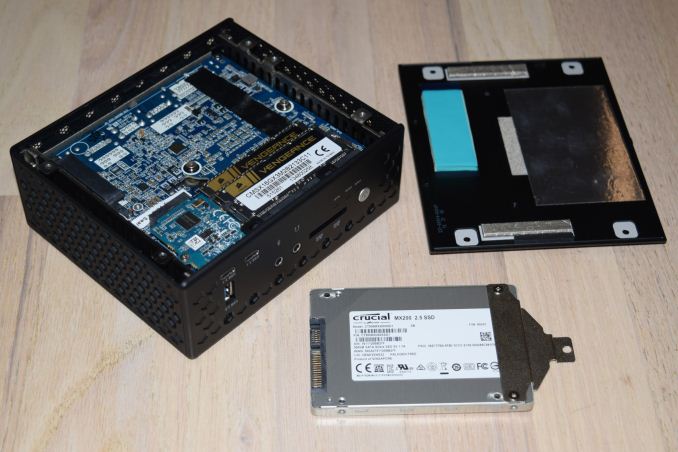 The specifications of our review configuration are presented in the table below.

The kit doesn't come with any OS, but we installed Windows 10 Pro x64 for our benchmarking purposes. The package does include a CD as well as a read-only USB key with the Windows 10 drivers. Other than the main unit, we also have a 65W (19V @ 3.42A) DC adapter, a user manual and a quick start guide, metal tabs and screws for VESA mounting, a thermal pad for the 2.5" drive and a dual-band Wi-Fi dipole antenna. 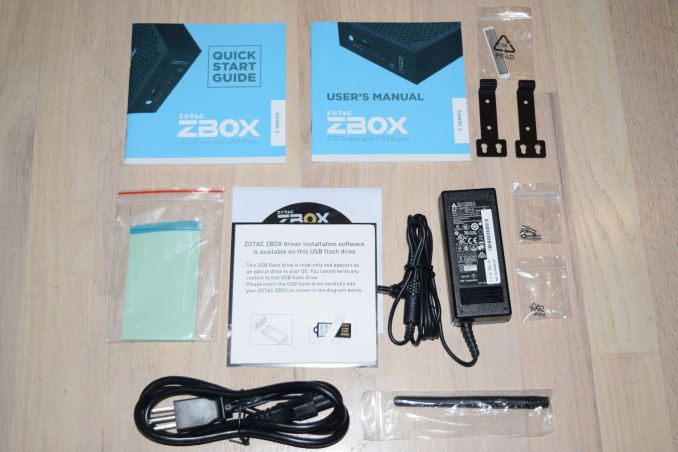 The dimensions of the CI523 nano come in at 146.4mm x 126.5mm x 60.5mm, making it slightly larger than the NUC6i3SYH at 115mm x 111mm x 48mm. The internals get an upgrade compared to the previous C-series units: instead of the thermal pad over the SoC / CPU, we now have a substantial heat-sink (pictured in the gallery below, courtesy of ComputerBase.de). The underside of the chassis also has a metal plate with ridges to aid in VESA mounting. The ridged plate is part of the thermal design to take away the heat from the DRAM and the 2.5-inch drive on the bottom side of the board. This is aided by thermal pads that are affixed to those components and make contact with the bottom part of the chassis. Otherwise, the chassis and thermal design are similar to the previous generation units - a honeycomb design with a mesh inside to help in the convective cooling process. 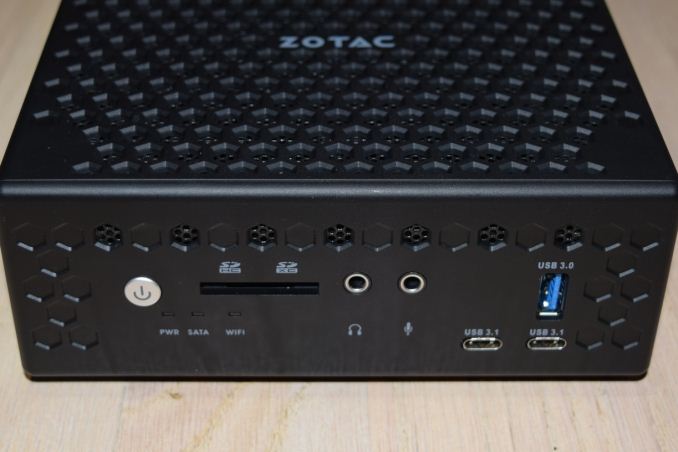 Moving on to the other features of the CI523 nano, we have two USB 3.1 Gen 2 Type-C ports in the front panel that are enabled by an ASMedia ASM1142 controller. A USB 3.0 Type-A port is placed vertically above these two Type-C ports. Audio jacks and a SDXC card slot, along with the power button and some status LEDs round out the front panel. The rear panel has two USB 2.0 ports and a USB 3.0 port (all Type-A), a RJ-45 Gigabit LAN port, HDMI and Display Port (full-size) outputs and a RP-TNC connector for the Wi-Fi dipole antenna.

The Zotac ZBOX CI523 nano is based on the standard Skylake-U platform with the Sunrise Point-LP PCH integrated in the same package as the CPU. There are a maximum of 16 possible high-speed I/O lanes in a Skylake-U system, and they can be configured in a flexible manner. 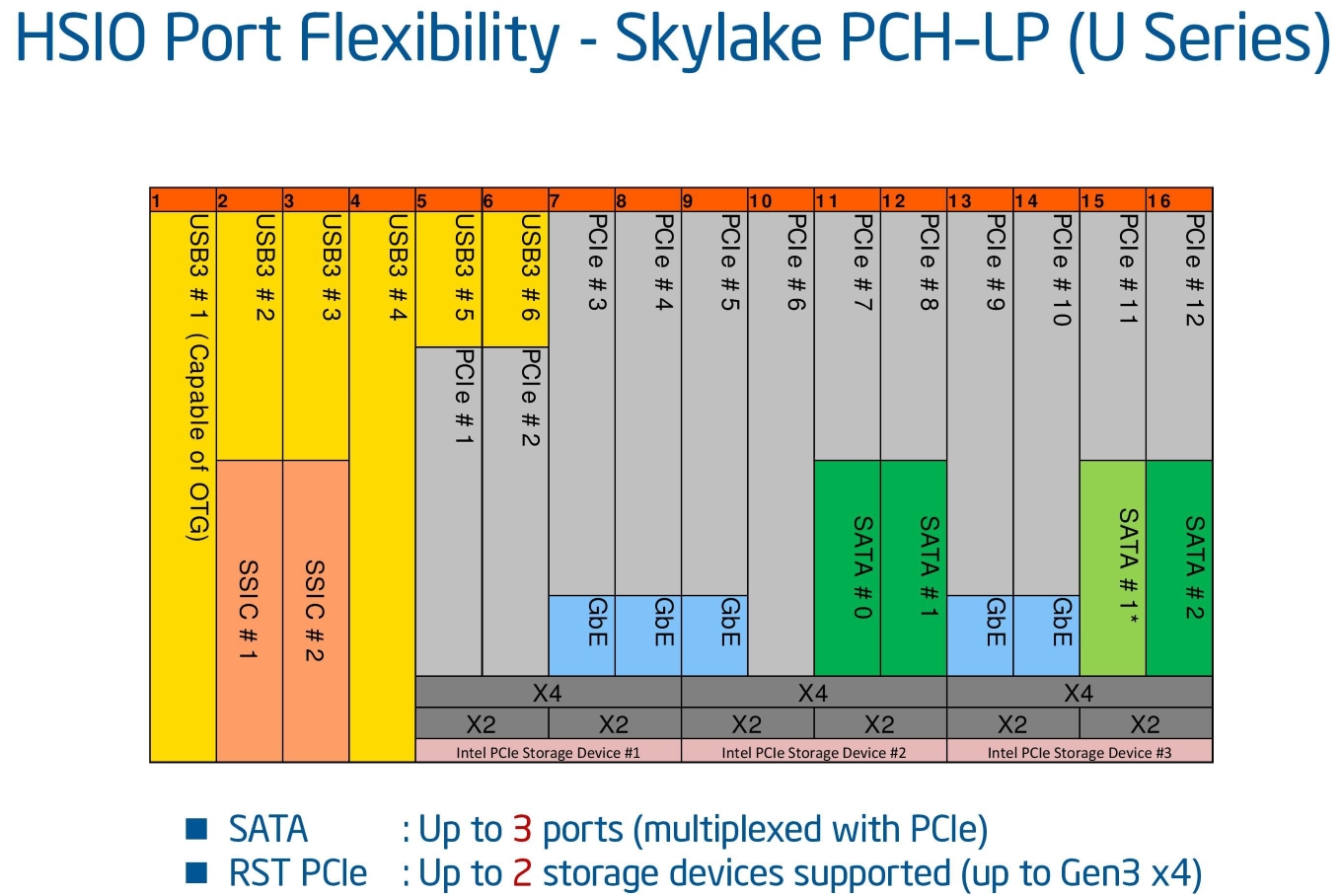 The PCIe lanes in our configuration of the ZBOX CI523 nano are distributed as follows:

In the table below, we have an overview of the various systems that we are comparing the ZOTAC ZBOX CI523 nano against. Note that they may not belong to the same market segment. The relevant configuration details of the machines are provided so that readers have an understanding of why some benchmark numbers are skewed for or against the ZOTAC ZBOX CI523 nano when we come to those sections.