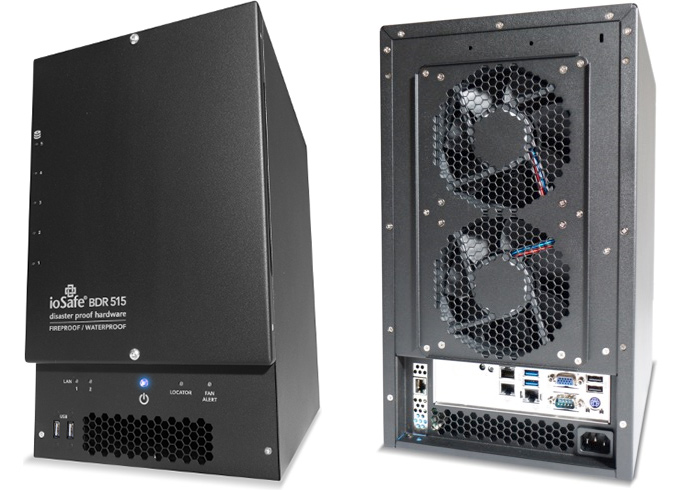 ioSafe's disaster-resistant storage devices are unique in the market. Yesterday, they introduced the latest member of their backup and data recovery (BDR) server lineup - the BDR 515. It is a 5-bay x86 NAS running Windows Server 2012 R2. Earlier NAS appliances from ioSafe such as the 1513+ and 1515+ were based on Synology's DSM OS. With the BDR 515, the focus has shifted to consumers who want the familiarity and capabilities of Microsoft's server platform.

Before going into the details of the BDR 515, it might be useful to see the conditions under which a BDR NAS unit might make sense. These appliances are usually installed in server rooms and automatically back up all the data stored on servers both locally and to the cloud. If the servers are damaged because of a major hardware outage, a natural disaster, or other emergency, BDRs can help to quickly restore the data. Thanks to the fact that BDRs store data both locally and in the cloud, they can restore data even if they are physically damaged as well. Moreover, the BDR can act as a replica of the server it is attached to and work as a backup machine.

ioSafe’s BDR 515, like their complementary NAS offerings (1515+, 1513+ and the 214), is resistant to both fire and water damage. The protection specifications are the same as before - fire with temperatures up to 1550°F for 30 minutes (in accordance with the ASTM E-119 testing standard) and submergence in 10-feet deep water for three days without any harm to data. Unlike other BDR servers, the model 515 from ioSafe protects data immediately after it is recorded on its HDDs thanks to its ability to protect data in the harshest environments. Even if the Internet connection is absent after a fire or flooding, the protection for the hard disks in the BDR 515 allows data to be restored from the device after retrieval of the appliance from the disaster site.

The ioSafe BDR 515 is based on the dual-core Intel Core i5-4570T (2.90 GHz) and is equipped with 16 GB DDR3 memory. It uses the Areca ARC-1225-8i hardware RAID controller and two Intel i210 Gigabit Ethernet controllers. The BDR 515 can be equipped with up to five 6 TB WD Red hard disk drives and store up to 30 TB of data. ioSafe's previous flagship BDR - the 1515+ running Synology's DSM - utilized a low power Intel Atom processor. The 515's Core i5-4570T should help ioSafe to significantly improve performance of the solution, but, at the cost of higher power consumption.

To ensure that the BDR 515 can handle the CPU with higher TDP, ioSafe had to install a dedicated air duct to pull fresh outside air directly across the processor heat sink. In addition, the company increased the quantity of FloSafe vents for greater airflow over HDDs. The fans are also larger compared to the ones in the 1515+.

The device will only be available via ioSafe's channel partners and its price depends on actual configuration.