Dell’s previous model of the Venue 11 Pro 7000 included a Core i5 processor, which meant it was thicker and heavier than this year’s model. The outgoing model also included the necessary fans to keep the Core i5 cool. The move to Broadwell-Y, or Core M as it is known, changes all of this. The device is now passively cooled, and acts much more like a tablet than before. The weight has also been slimmed down a bit, with the new model coming in at 723 grams. That is a bit under the 800 grams of the Surface Pro 3, although that device is also a bit bigger with its 12 inch 3:2 display.

The display in the Venue 11 is a 1920x1080 IPS model, and that defines the initial tablet experience. It includes generous bezels, which make it easy to hold the device without accidentally touching the display, and the bezels make using Windows 8’s edge gestures a snap. Dell moved to their “Infinity Display” which has minimal bezels on their Venue 8 Android tablet, and while it looks fantastic, it can cause usability issues with the tablet, so keeping the display bezels on this tablet is a good thing. 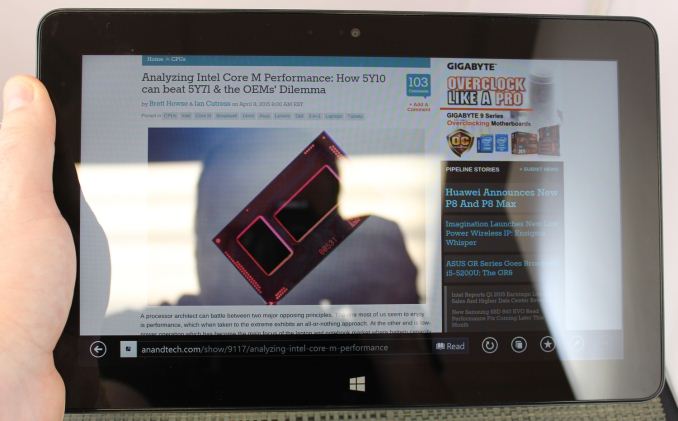 There seems to be some movement away from 16:9 displays, especially in the tablet space. Apple of course uses a much more square 4:3 ratio on their tablets, which make them a lot easier to use in portrait mode. 16:10 would be better for this tablet, or even squarer like the 3:2 of the Surface Pro 3 and just announced Surface 3 might improve ergonomics of this tablet. When using it in portrait mode, it is incredibly tall and a bit awkward. In landscape, it is a lot better, but still some more vertical height in that mode would be appreciated to help balance the weight when holding it in one hand.

The styling of the Venue 11 is a bit pedestrian, but is nonetheless functional. The glass front has an accurate touch digitizer, and includes the stylus support. The sides are nicely rounded and comfortable in the hand. The power button is on the top right corner, and the volume rocker is on the top left. One questionable port location is the full sized USB port, which is on the bottom left size. If you have something plugged into the USB port, you could not be able to hold onto the device with your left hand. The micro USB power connector is only slightly higher, and can certainly cause an issue if you are holding the device while it is being charged. It would be nicer to see both of these ports moved up on future models. The right side of the tablet has a covered slot for a micro SD card, as well as a chassis lock.

The back of the Dell is covered in a soft-touch coating, which makes it very easy to hang on to and you never feel like it is going to slip out of your hands like some other devices. The rear also houses the 8 Megapixel camera, which is angled a bit to make it a bit easier to use when the tablet is tilted. 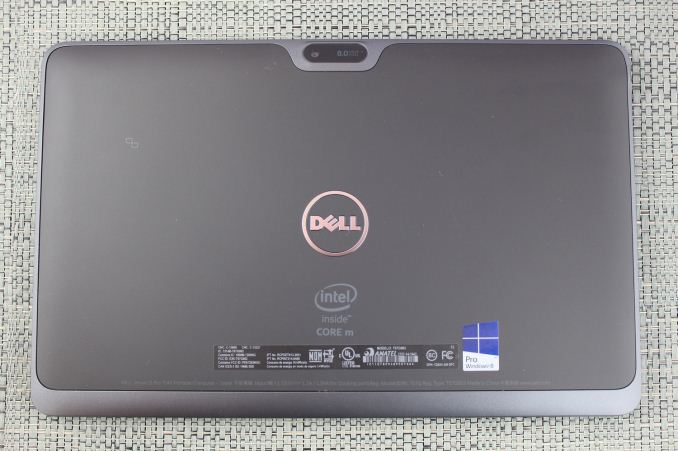 Overall, Dell has crafted a sturdy and comfortable successor to their previous Venue 11 Pro, and with the move to Core M it is a much better tablet than before. There are a few issues which may bother some people, such as the display ratio and location of the charging and USB ports, but in the end it is a reasonably thin and light tablet with enough power to be a laptop replacement for many people.