SanDisk Steps Into Storage Arrays: Launches InfiniFlash Series with Up to 512TB in 3U at <$1/GB

As a rather unexpected move, SanDisk has announced that it will be stepping into the storage array business with its in-house designed InfiniFlash all-flash array series. The driving force behind SanDisk's strategy is big data as the current solutions on the market don't meet all the needs that big data customers have. Most importantly the customers are after higher density and lower price as the data centers can easily be hundreds of petabytes in size, so the acquisition cost as well as the power, cooling and property play a major role.

The InfiniFlash comes in three different flavors. The IF100 is an open platform that is designed for OEMs and hyperscale customers with their own software platforms, although it does include a Software Development Kit (SDK) for monitoring purposes. The IF500 is aimed specifically for object storage using ceph (an open source object storage system), which allows very high capacity clusters to be built efficiently. I admit that I need to dig in a bit deeper to fully understand the way object storage works and its benefits, but it requires less metadata than traditional file and block based storage systems do and the overhead of metadata managing is also lower, which practically enables unlimited scale out opportunities. Finally, the IF700 focuses on performance and is built upon Fusion-io's ION platform with database (Oracle, SAP, etc.) workloads in mind. In a nut shell, the key difference is that the IF100 is hardware only, whereas the IF500 and IF700 come with InfiniFlash OS (I was told it's Ubuntu 14.04 based). Hence the IF100 is also cheaper at less than $1 per GB, while the IF500 and IF700 will be priced somewhere between $1 and $2 per GB. For an all-flash array that's a killer price for raw storage (i.e. before compression and de-duplication) as it's not uncommon for vendors to still charge over $20 per raw gigabyte.

SanDisk offers two capacity configurations: 256TB and 512TB, of which 245TB and 480TB are usable. The ~7% over-provisioning is used mostly for garbage collection with the goal of increasing sustained performance. In terms of performance, SanDisk claims over 780K IOPS, although the presentation showed up to 1 million IOPS at <1ms latency for 4KB random reads with two nodes. The endurance is 75PB of writes, which results in ~4-year lifespan with 90/10 read/write ratio at 6GB/s. For connectivity the InfiniFlash offers eight SAS 6Gbps ports, which can be upgraded to SAS 12Gbps in the future without any downtime.

EDIT: My initial endurance numbers were actually wrong. The endurance for 8KB random writes is 189PB and 2,270TB for sequential 16KB writes. Assuming 6GB/s throughput that would result in a little over 10 years with 8KB random IO with 90/10 read/write ratio. 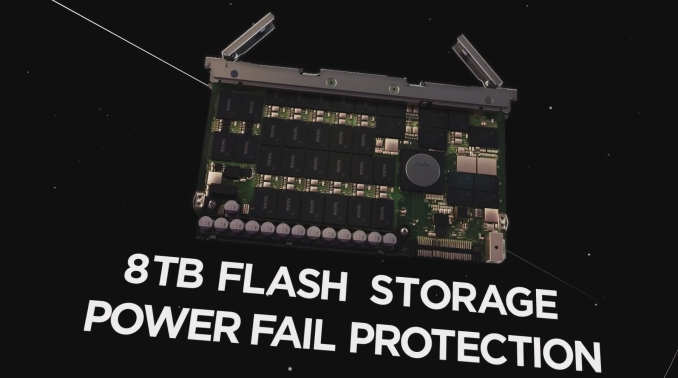 Architecturally the InifiniFlash is made out of 64 custom 8TB cards. The cards are SAS 6Gbps based, although as usual SanDisk wouldn't disclose the underlying controller platform. However, judging by the photo it appears to be a Marvell design (see the hint of a Marvell logo on the chip), which honestly wouldn't surprise me since SanDisk has relied heavily on Marvell for controllers, including SAS ones (e.g. Optimus Eco uses the 88SS9185 SAS 6Gbps controller). As for the NAND, SanDisk is using its own 1Ynm 64Gbit MLC (i.e. second generation 19nm) and each card consists of 64 eight-die NAND packages (this actually sums up to only 4TB, so I'm waiting to hear back if there's a typo somewhere in the equation -- maybe it's a 128Gbit die after all). SanDisk will also be using different types of NAND in the future ones new nodes become available in volume.

EDIT: As I speculated, the die capacity is 128Gbit (16GB), so each package consists of eight 128Gbit dies that yields 128GB per package and with 64 packages per card the total raw capacity is 8TB.

The InfiniFlash will be sold through the usual channel (i.e. through OEMs, SIs & VARs), but SanDisk is also selling it directly to some of its key hyperscale customers that insisted on working directly with SanDisk. While it may seem like SanDisk is stepping into its partners area with direct sales, the big hyperscale customers are known to built their own designs, so in most cases they wouldn't be buying from the OEMs, SIs or VARs anyway. Besides, the InfiniFlash doesn't include any computing resources, meaning that the partners can differentiate by integrating InfiniFlash to servers for an all-in-one approach, whereas the units SanDisk is selling are just a bunch of raw flash. 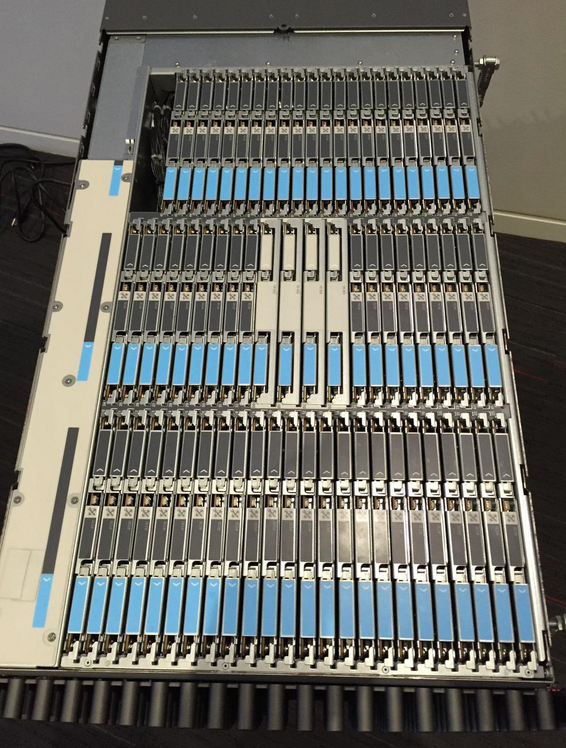 While the InfitiFlash as a product is certainly exciting and unique, it's not as interesting as the implications of this strategical move. In the past the SSD OEMs have kept their fingers away from the storage array market and have simply focused on building the drives that power the arrays. This strategy originates from the hard drive era where the separation was clear: companies X made the hard drives and companies Y integrated them to arrays. Since there wasn't really a way to customize a hard drive in terms of form factor and features, there was no use of merging X and Y given that the two had completely different expertise.

With flash that's totally different thanks to the versatility of NAND. Only the sky is the limit when it comes to form factors as NAND can easily scale from a tiny eMMC package to 2.5" drive and most importantly to any custom form factor that is desired. SanDisk's biggest advantage in the storage array business is without a doubt its NAND expertise. Integrating NAND properly takes much more knowhow and effort than hard drives because ultimately you have to abandon the traditional form factors and go custom. It's not a surprise that the InfiniFlash is the densest all-flash array on the planet because as a NAND manufacturer SanDisk has the supply and engineering talent to put 8TB behind a single controller with a very space efficient design. The majority of storage array vendors simply source their drives from the likes of SanDisk, Intel and Samsung, so they are limited by the constraining form factors that are available on the open market.

The big question is how will the market react and will this become a trend among other SSD vendors as well. The storage array market is certainly changing and the companies that used to rule the space are starting to lose market share to smaller, yet innovative companies. As the all-flash array market matures, it seems logical for the SSD vendors to step in and eliminate the middle-man for increased vertical integration. The future remains to be seen, but I wouldn't be surprised to see others following SanDisk's lead. The bar has definitely been set high, though.