A number of vendors exist in the dual processor workstation motherboard market. At the time of the build, LGA 2011 Xeons had already been introduced, and we decided to focus on boards supporting those processors. Since we wanted to devote one physical disk and one network interfaces to each VM, it was essential that the board have enough PCI-E slots for multiple quad-ported server NICs as well as enough native SATA ports. For our build, we chose the Asus Z9PE-D8 WS motherboard with an SSI EEB form factor.. 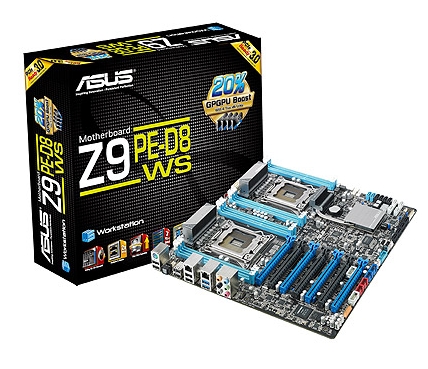 Based on the C602 chipset, this dual LGA 2011 motherboard supports 8 DIMMs and has 7 PCIe 3.0 slots. The lanes can be organized as (2 x16 + 1 x16 + 1x8 or 4 x8 + 1x16 + 1 x8). All the slots are physically 16 lanes wide. The Intel C602 chipset provides two 6 Gbps SATA ports and eight SATA 3 Gbps ports. A Marvell PCIe 9230 controller provides four extra 6 Gbps ports making for a total of 14 SATA ports. This allows us to devote two ports to the host OS of the workstation and one port to each of the twelve planned VMs. The Z9PE-D8 WS motherboard also has two GbE ports based on the Intel 82574L. Two Gigabit LAN controllers are not going to be sufficient for all our VMs. We will address this issue further down in the build.

The motherboard also has 4 USB 3.0 ports, thanks to an ASMedia USB 3.0 controller. The Marvell SATA - PCIe bridge and the ASMedia USB3 controller are connected to the 8 PCIe lanes in the C602. All the PCIe 3.0 lanes come from the processors. Asus also provides support for SSD caching (where any installed SSD can be used as a cache for frequently accessed data, without any size limitations) in the motherboard. The Z9PE-D8 WS also has a Realtek ALC898 HD audio codec, but neither of the above aspects are of relevance to our build.

One of the main goals of the build was to ensure low power consumption. At the same time, we wanted to run twelve VMs simultaneously. In order to ensure smooth operation, each VM needs at least one vCPU allocated exclusively to it. The Xeon E5-2600 family (Sandy Bridge-EP) has CPUs with core counts ranging from 2 to 8, with TDPs from 60 W to 150 W. Each core has two threads. Keeping in mind the number of VMs we wanted to run, we specifically looked at the 6 and 8 core variants, as two of those processors would give us 12 and 16 cores. Within these, we restricted ourselves to the low power variants. These included the hexa-core E5-2630L (60 W TDP) and the octa-core E5-2648L / E5-2650L (70 W TDP).

CPU decisions for machines meant to run VMs have to be usually made after taking the requirements of the workload into consideration. In our case, the workload for each VM involved IOMeter and Intel NASPT (more on these in the software infrastructure section). Both of these softwares tend to be I/O-bound, rather than CPU-bound, and can run reliably on even Pentium 4 processors. Therefore, the per-core performance of the three processors was not a factor that we were worried about. 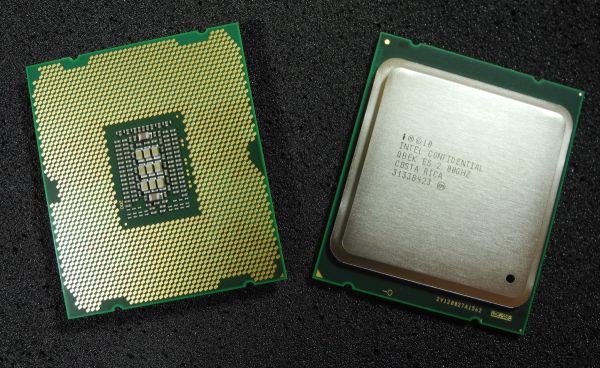 The choice of coolers for the processors is dictated by the chassis used for the build. At the start of the build, we decided to go with a tower desktop configuration. Asus recommended the Dynatron R17 for use with the Z9PE-D8 WS, and we went ahead with their suggestion. 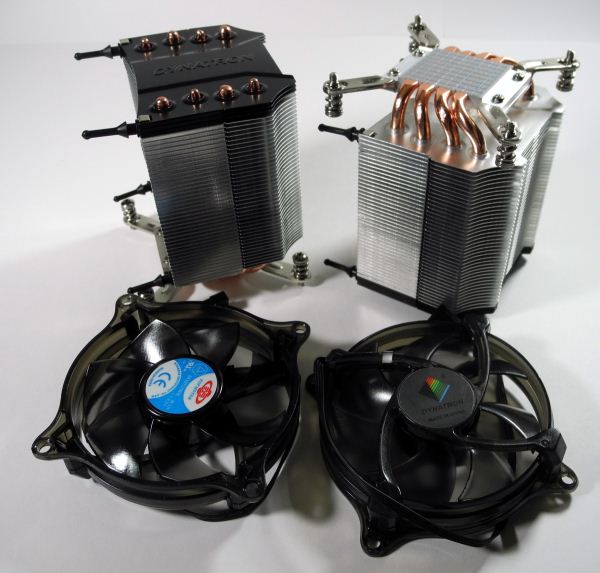 The R17 coolers are meant for the LGA 2011 sockets for 3U and above rackmount form factors as well as tower desktop and workstation solutions. They are made of aluminium fins with four copper heat pipes. A thermal compound is pre-printed at the base. Installation of the R17s was quite straightforward, but care had to be taken to ensure that the side meant to mount the cooler’s fans didn’t face the DIMM slots on the Z9PE-D8 WS. 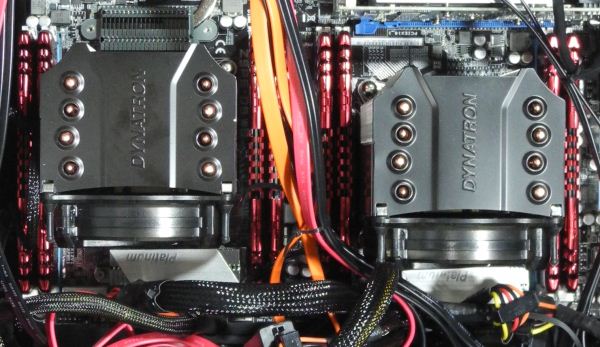