The Samsung is a TN panel but Samsung advertises improved viewing angles as one feature of the S23A (with the name "Magic Angle Vertical"); you can read about this and additional features on their product page. As you'd expect there's plenty of marketing hyperbole to be found, but in practice I did notice that the S23A has better viewing angles than competing TN solutions.

Most TN panels experience huge color shifts when viewed from the top or bottom of the monitor, and once they get past 20” or so in size you start to see the shift even when attempting to view straight on; by comparison, the S23A looks good when viewed straight on and I didn't see noticeable shifts from my normal viewing area. However, this remains a TN panel and when viewed from accute angles the shift in color and contrast is still present.

Unfortunately, while viewing angles are better than most TN displays, the pre-calibration Delta E numbers are as bad as we've come to expect from consumer displays. 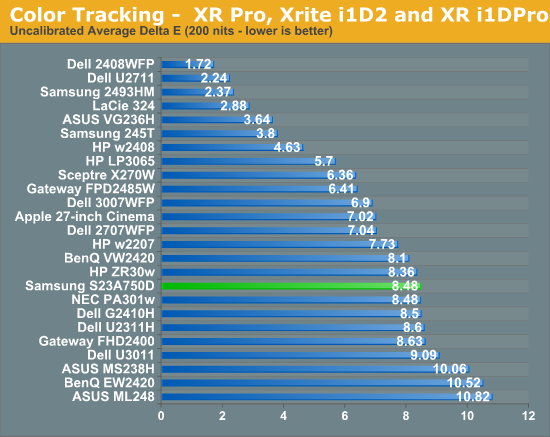 With an average dE over 8 and some of the worst overall numbers occurring the grayscale, the initial numbers for the Samsung aren't very good. The result is similar to competing displays, but still disappointing. Let's move on to calibrated results.

Using the color settings to get the white balance as close as possible to D65 and then setting the brightness and contrast to get 200 nits of light output, I ran the calibration routine in ColorEyes Pro to see if the Samsung could perform any better. 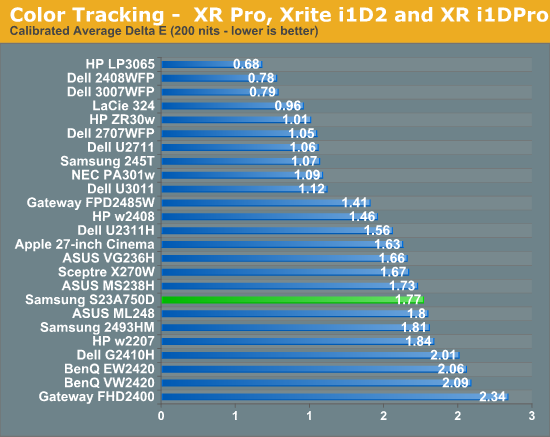 The numbers for the Samsung are overall very good once calibrated. Not only do we get an average dE of 1.77, but the only large errors at all are once again in shades of blue, including the shade of cyan that falls outside of the sRGB spectrum. The entire grayscale spectrum is under 1.0 dE, and only 3 of the 24 swatches are above dE 3, which is the visible level if ColorEyes uses dE76 (which I’d assume, but can’t confirm). Hopefully in the near future we will be able to get all these results in dE94, which is more accurate for measuring color error. I also went ahead and did the same test, though at 100 nits instead of 200 nits, which is what might be used if you are doing print work. 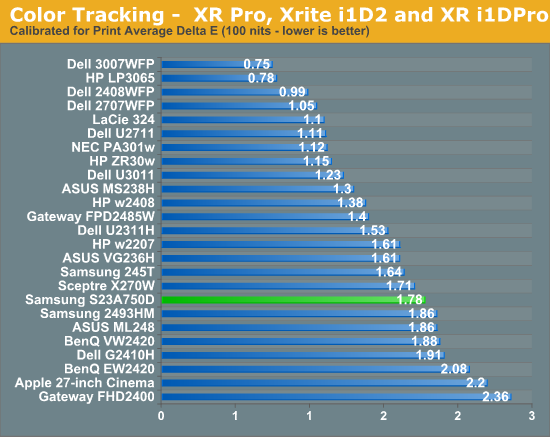 Here the performance is almost identical to the 200 nits data. The grayscale isn’t quite as good, but still virtually perfect, and almost all the issue falls at the same three sample points. Overall the performance here was much better than I expected from a TN panel.