Though we've learned a lot about the Galaxy Nexus specifications already, one of the things that has remained a question thus far is whether its 4.65" 720p HD Super AMOLED display uses an RGB subpixel rendering layout or PenTile. We've now confirmed that the Galaxy Nexus display does in fact use RGBG PenTile, like all the Nexus devices to date. This isn't super surprising considering that Samsung has been pretty good about adhering to all the monikers it has gradually been tacking onto AMOLED. There are a number so far - 'super' connotes an optically bonded panel and digitizer stack, 'plus' connotes an RGB stripe, and now 'HD' connotes, well, 720p. HD Super AMOLED lacks Plus, and thus isn't an RGB stripe.

The next question is just what 4.65" HD Super AMOLED will look like, or whether the presence of PenTile will be as noticeable as previous AMOLED phones like the Nexus S / Galaxy S or Nexus One where it was arguably very noticeable. That said, at some subpixel density it should become difficult to impossible to notice PenTile's presence, it's just a matter of exceeding human visual acuity. Having not seen the Galaxy Nexus in person yet and given the absence of good macro shots of the display, we have put together a numerical comparison pitting the Galaxy Nexus panel up against some other common smartphone displays.

First up is a quick plot of the effective pixel density of some popular displays. Stated another way, this is the pixel density based on the manufacturer's stated logical resolution, which is also the resolution of Android's render target for the phone. 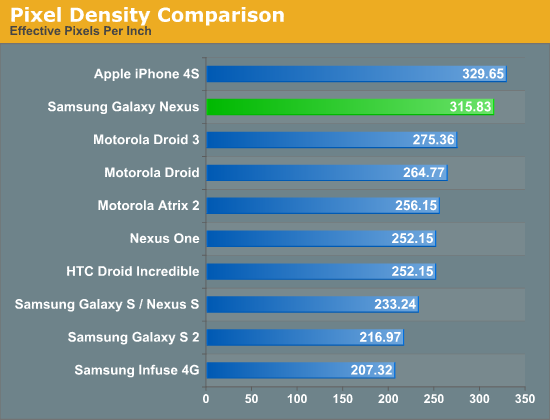 Note that this is the traditional means of reporting pixels per inch that we've published before. However, using this metric is just a bit misleading since it doesn't take into account the difference between 2 subpixel-per-pixel RGBG or RBGW PenTile versus the 3 subpixel-per-pixel RGB stripe. To make for an effective comparison, we've put together another plot where we take into account the presence of PenTile and report subpixel density. 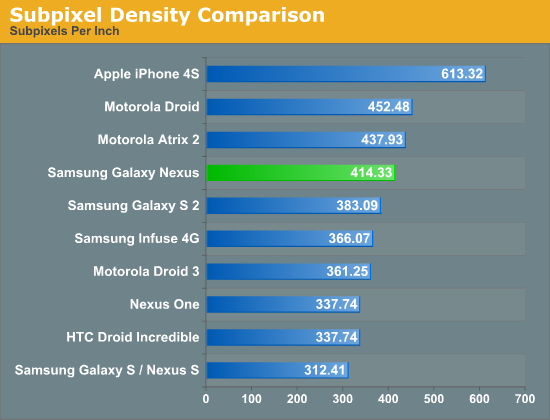 Here things still look pretty good for the 4.65" HD Super AMOLED display, putting it just north of SGS2's Super AMOLED Plus display with an RGB stripe. I wager that if you were satisfied with the pixel density of SGS2 that the pixel density Galaxy Nexus actually won't be off-putting despite the presence of PenTile. In addition, hopefully some of the UI design considerations that come along with using PenTile (no vertical 1 pixel thick elements) have been taken into consideration from the outset for Ice Cream Sandwich. For true subjective impressions however, we'll have to wait and see.