While our recent review of the Alienware M17x R3 proved you could have a gaming notebook that was still capable of halfway decent battery life, the hybrid solution found in that machine was more the exception than the rule. NVIDIA is refreshing their mobile high end, and while that's mostly newsworthy on its own, the big improvement is Optimus support for every part in the GeForce 500M series, from top to bottom. That includes the king of the hill, the (slightly) new GeForce GTX 580M.

The recent refresh of the GeForce GTX 460M into the 560M was a welcome one, bringing Optimus support and higher clocks to what's liable to be their crown prince of budget mobile gaming. The GTX 560M is beginning to materialize in the market, but we were still left with an odd hole in NVIDIA's lineup at the top. That hole has now been filled, and thankfully it's at least a little more than the usual speedbump that goes along with a new moniker these days. Now every part in the 500M series can switch over to Sandy Bridge's integrated graphics while running on the battery, offering the best of both worlds.

NVIDIA's new top dog is the GeForce GTX 580M. Every spec on the press sheets is listed as "up to," but that's really par for the course. While NVIDIA's reps declined to comment on what chips are being used for the GTX 580M, you'll find the specs are a dead giveaway. The 580M seems to be a mobile version of the GF104/114 (more likely GF114), with 384 CUDA cores, with a main clock of 620MHz (yielding 1240MHz on the shader cores). Riding shotgun is a 256-bit memory bus supporting up to 2GB of GDDR5 clocked at an effective 3GHz. Those of you keeping score at home will note that's an improvement of 45MHz on the core (and thus 90MHz on the shaders), with the memory speed remaining constant. All told I'd expect performance in the neighborhood of the desktop GeForce GTX 460 1GB version (or at least, the original NVIDIA spec): not too shabby, but still an incremental improvement on the shipping GTX 485M. The major selling point is, again, Optimus support in the 580M. 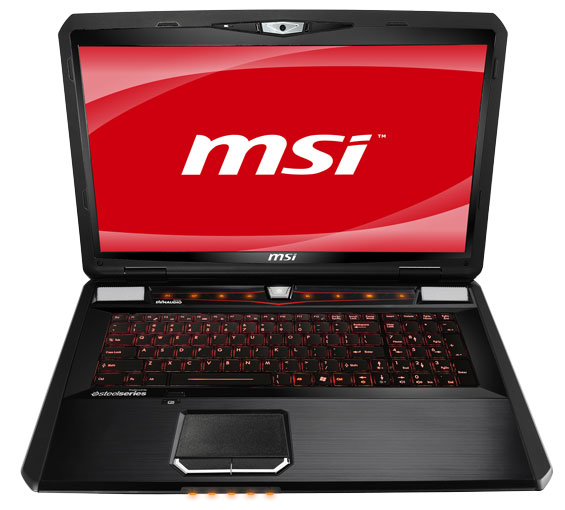 NVIDIA also was able to point out specific models of notebooks that will be shipping with these parts. Availability in 17" Clevo notebooks should surprise no one, with the P270WN in particular supporting both 3D Vision and SLI'd GeForce GTX 580M's. Alienware's new M18x (which we have en route for review) will also be supporting the GeForce GTX 580M in SLI. And finally, the MSI GT780R shown above will be shipping with the GeForce GTX 570M.

NVIDIA expects notebooks featuring the new GPUs to be available for order from OEMs today.