We do have a few other items to address here before we move on to the performance numbers. First, there's the graphics configuration. The combination HD 4250/5650 is an awesome idea in practice, but Toshiba's drivers are at least four months old now (the driver date in the control panel is 4/26/2010). What's more, Toshiba doesn't participate (at least not yet—we can only hope this review will spur a change) in AMD's mobile driver program. Thankfully, we had some success in downloading the latest mobility drivers and getting them to install (see below), but then you're not running a supported configuration. ATI may also choose to close our workaround with a future release, so you're potentially stuck running the Toshiba-provided drivers, but for those that want our "hack"…. 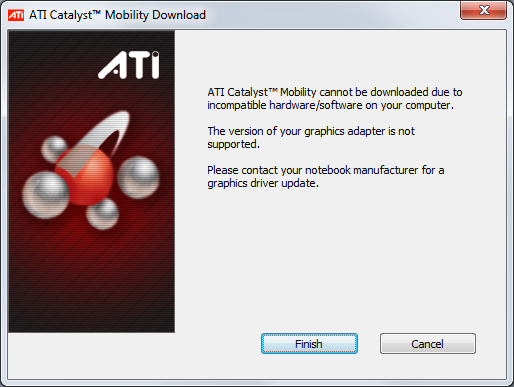 If you try to use the ATI mobility driver download utility, you'll get the above message saying your laptop isn't supported. Lucky for us, we have other ATI equipped laptops, so we were able to use those to download the Catalyst 10.8 drivers. After obtaining the drivers, initial attempts to install them resulted in a black screen and an apparently crashed computer. However, switching to the IGP first (via unplugging the laptop) allowed the 10.8 drivers to install without a hitch.

We had some concerns with the driver situation originally, but with the updated drivers on our A665D we discovered we had a different problem. Our A665D appears to have a flaky HD 5650 GPU that resulted in several of our games failing to run/render properly. This precipitated some email messages back and forth with AMD, where we learned we had first-production-run hardware (in other words, not quite 100% final). More delays ensued and eventually we ended up with a retail A660D in place of our faulty A665D. Outside of benchmarks that stress the hard drive, though, the two systems appear to perform identically—test result variance is well within the margin of error.

Speaking of graphics and drivers, AMD still uses hardware muxes controlled by software, similar to NVIDIA's Gen 2 switchable technology. The good news is that it works, but there are a few quirks. Toshiba doesn't provide an easy way to control the active GPU with the official drivers; instead, whenever you plug in (or unplug) your AC adapter, a message pops up stating that the graphics chip is going to switch and giving you a chance to accept/decline the switch. If you search in the Program Files directory under ATI Technology, you can find the CCC.exe file and run this, which allows you to access the full Catalyst Control Center and GPU switching functions, but we'd prefer this to be enabled by default rather than hidden away.

While the graphics switching setup is okay, but you still have the problem of blocking applications, which may cause headaches in a few situations,e.g. running Minesweeper will block switching and require you to exit the application first. The upside is that with AMD providing both the IGP and the dGPU, drivers don't need to go through any extra steps (something that happens when you use switchable graphics with Intel IGPs and AMD or NVIDIA dGPUs), so getting new drivers should be relatively easy. As we already mentioned, Toshiba isn't part of AMD's mobile driver program at present, but if you can get the drivers through other means (e.g. a friend with a laptop that has ATI graphics that isn't made by Panasonic, Sony, or Toshiba) you can install the drivers.

Finally, continuing with the GPU story, the HD 5650 in the A660D is clocked at 450MHz rather than 550MHz. For whatever reason, AMD allows manufacturers quite a bit of leeway on the 5650 clocks. The Acer 5740Ghad the same GPU clocked at 550MHz, and the 22% clock speed advantage will certainly show up in gaming. Really, this 450MHz part should be the "HD 5630", or some other name to differentiate it from the 550MHz part. There's a 650MHz part that otherwise has the same specs, and that one gets a bump to "HD 5730", so AMD is certainly aware of the difference 100MHz can make. Why Toshiba decided to drop the maximum GPU clock isn't clear, but a 550MHz GPU would have been better.

Now that we've got the overview out of the way, let's move on to the benchmarks and look at how the A660D stacks up.