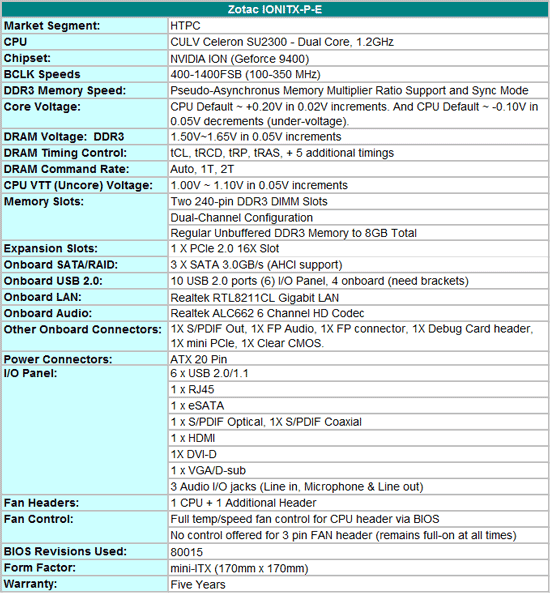 Regular fare from ZOTAC here, with Atheros WiFi included as standard. Realtek’s ALC662 six channel analogue audio out is sub-par at the price point we feel as some users prefer full 7.1 channel output capability. What’s in the box?

Nothing surprising here, although we’d like to have seen three SATA cables instead of two given that the board has three SATA ports. The manuals are well written and easy to follow, so setup should be painless. There’s no bundled software to report on, so we can move on to the BIOS and short user expereince.

For everyday use, ZOTAC’s BIOS provides adequate functionality, although there are a few areas that could do with a touch of attention to bring this board in line with ION offerings from ASUS. The memory control section could do with a bit of a buff, as there’s no way to set important timings like tRCD above 7 clocks manually. The board will select SPD values higher than this when left to AUTO, but should you wish to set things yourself, a range of one to seven clocks is the limit.

Under-voltage control is also limited to a maximum of 0.1V below stock. We don’t see it as a huge deal breaker given the already low power consumption of the platform, but others might. The overclocking side of things is workable, however there is no self-recovery feature built into the BIOS; the only way to get the board to POST if a setting is wrong or out of stable range is to clear CMOS. We mention this only because our ASUS ION board recovers automatically in such situations.

One thing that is pleasing is that wake from S3 works even from USB. We know early iterations of ION were plagued by issues so took special precautions to check things out. We also tested compatibility with our ASUS Xonar D2X PCIe soundcard and encountered no problems during use. We're hoping this is a sign that users won't encounter any problems when using TV tuner cards and such in the PEG slot.

Unfortunately, the ZOTAC BIOS lacks any kind of workaround for enabling the NVIDIA IGP when a discrete ATI GPU is used in PEG slot. This is a feature that many vendors have managed to hack into their H55 motherboards, so it would be nice to see something similar done with ION. We've passed this suggestion on to ZOTAC and they are looking into implementing it in a future BIOS if at all possible.