ASRock provides a graphical UEFI interface for the DeskMini H470. There are multiple options to tweak the performance of the system for the end-user's requirements. By default, the BIOS interface comes up in the 'Easy Mode'. 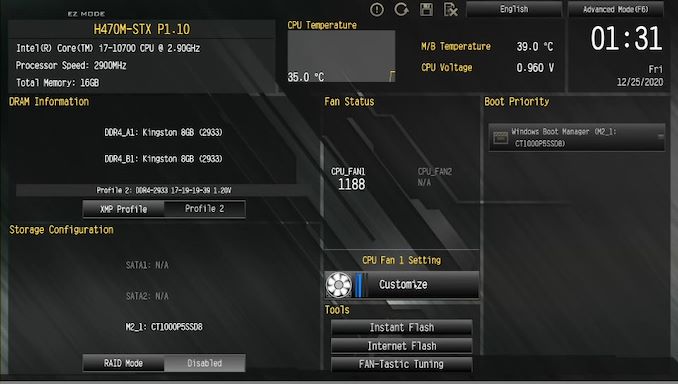 This mode provides quick access to commonly used functions - altering DRAM timings with XMP profiles (if the SODIMMs support it), updating the BIOS (either from an attached FAT16/32 USB driver, or directly from the Internet), modifying fan curves (duty cycle of the CPU fan for different CPU temperatures) quickly, changing boot priorities, and modifying the SATA controller mode (AHCI or RAID). Note from the previous section that the board has two SATA ports on the underside, and the drives attached to these ports can be operated in chipset RAID mode to present a single logical volume to the OS. Fan status, temperatures, voltage, and date information are also available in a functional layout.

The Kingston SODIMM kit used in the build supports a XMP 2.0 profile to operate with 'better than JEDEC-mandated' timings.at 2933 MHz. By default, the Auto setting falls back to JEDEC timings of 19-21-21-39. With a simple click on XMP 2.0, the system is able to configure itself for operating the SODIMMs with a 17-19-19-39 timing.

This can lead to a noticeable increase in memory throughput due to reduced latency as shown in the AIDA64 memory benchmark numbers above - whether this can lead to better performance for different use-cases is an exercise left out for another review. In this article, we only look at the performance of the system with the BIOS in its default settings.

The gallery above shows the various options available in the advanced mode. The base frequency boost option allows the board to plug in a higher than default TDP level. With the Core i7-10700 65W TDP model installed, the options available included values up to 90W - this is something we would have evaluated more thoroughly if we were to be considering this as a motherboard review. 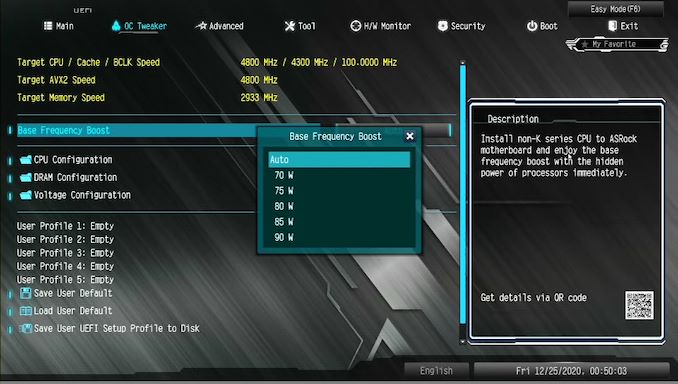 The other options in the OC Tweaker section allow fine-grained control over various CPU operating optimizations, DRAM timing parameters, and voltages. The BIOS also allows specification of the rating of the attached adapter - 65W adapters are good enough for 35W TDP processors, and 120W ones are recommended for the 65W CPU we tested with. Usage of 180W adapters allows the board to sustain higher TDP levels for the processors during workloads. 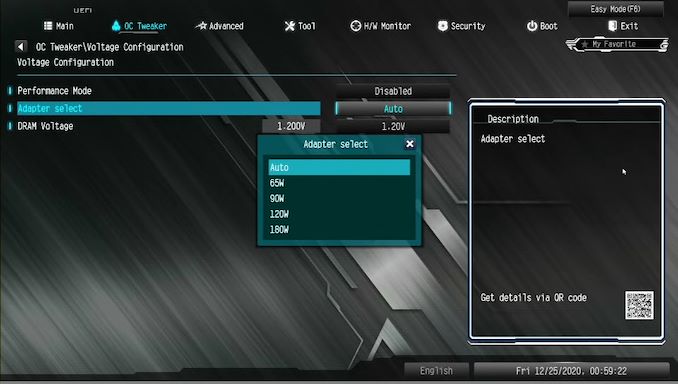 The BIOS also allows configuration of advanced settings for the CPU such as C-state support, SGX, etc. Chipset and storage device operating parameters (both SATA and NVMe) can also be controlled. USB ports can be selectively turned off. The BIOS also includes tools for setting up RAID, secure erasing SSDs, sanitizing NVMe drives, and updating the UEFI version with a single-click. ASRock's online BIOS update approach is quite helpful, particularly when considering that other manufacturers sometimes force the creation of a bootable DOS disk with the firmware file in it for update purposes.

The hardware monitoring section in the BIOS provides a view of the temperatures of various board components along with the fan speed. Tuning of the fan is also supported - different duty cycles can be configured for different temperatures. The 'FAN-tastic Tuning' approach allows this to be configured with a graphical view. 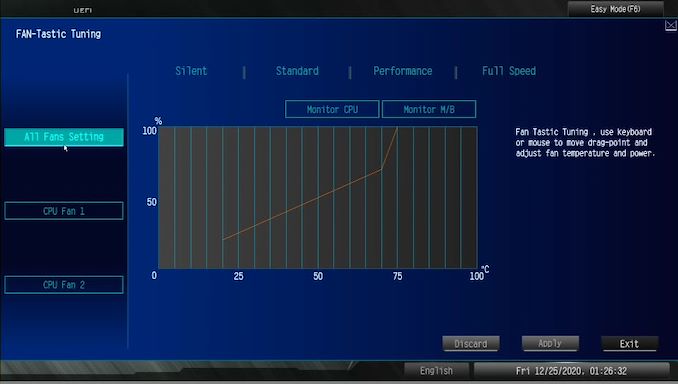 The UEFI firmware also allows BIOS passwords to be set for added security, configuration of secure boot, and setting up the security for attached drives. Various boot options can also be set (such as enabling network booting, boot order priorities, fast boot enabling, etc.). The UEFI shell can also be accessed, and one-time overriding of the boot device is also possible.

The DeskMini H470 BIOS provides plenty of tweaks for motherboard enthusiasts - however, in terms of I/O capabilities, ASRock has adopted a conservative approach. 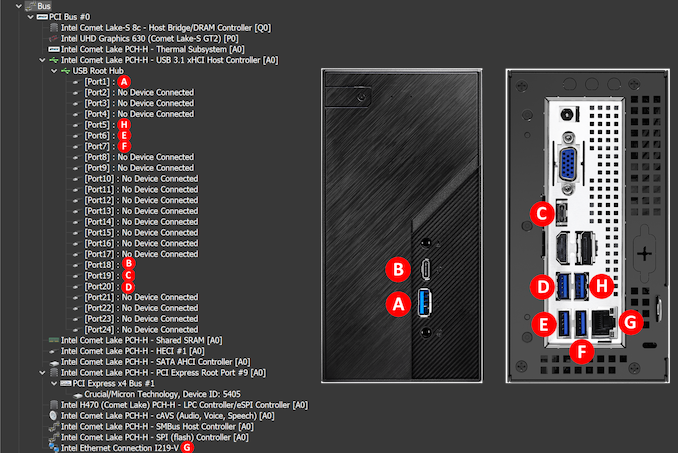 All the USB ports are off a single root hub in the PCH. The ones on the front operate at USB 3.2 Gen 2 (10 Gbps) speeds, while the ones on the rear are at USB 3.2 Gen 1 (5 Gbps) speeds. The USB-C port on the rear also has a DisplayPort signal muxed into it. The I219-V network controller is also off the PCH, as is the PCIe 3.0 x4 lanes set used to hook up the M.2 NVMe slot. In fact, everything here is bottlenecked by the DMI link to the processor which has PCIe 3.0 x4 lanes worth of bandwidth. The DeskMini H470 is too small to take advantage of the PCIe 3.0 x16 lanes directly from the CPU, but it does seem to be ready for four PCIe 4.0 lanes directly attached to the upcoming Rocket Lake processors.M/p>

In the remainder of this review, we will first look at BAPCo's SYSmark 25, followed by various UL benchmarks and miscellaneous workloads. We also present some storage performance numbers. A detailed look at the HTPC credentials of the system is followed by testing of the power consumption and thermal solution.

In the table above, we have an overview of the various systems that we are comparing the ASRock DeskMini H470 against. Note that they may not belong to the same market segment. The relevant configuration details of the machines are provided so that readers have an understanding of why some benchmark numbers are skewed for or against the ASRock DeskMini H470 when we come to those sections.