‘Better Yield on 5nm than 7nm’: TSMC Update on Defect Rates for N5

One of the key metrics on how well a semiconductor process is developing is looking at its quantitative chip yield – or rather, its defect density. A manufacturing process that has fewer defects per given unit area will produce more known good silicon than one that has more defects, and the goal of any foundry process is to minimize that defect rate over time. This will give the customers better throughput when making orders, and the foundry aims to balance that with the cost of improving the manufacturing process.

The measure used for defect density is the number of defects per square centimeter. Anything below 0.5/cm2 is usually a good metric, and we’ve seen TSMC pull some really interesting numbers, such as 0.09 defects per square centimetre on its N7 process node only three quarters after high volume manufacturing started, as was announced in November at the VLSI Symposium 2019. As it stands, the defect rate of a new process node is often compared to what the defect rate was for the previous node at the same time in development. As a result, we got this graph from TSMC’s Technology Symposium this week: 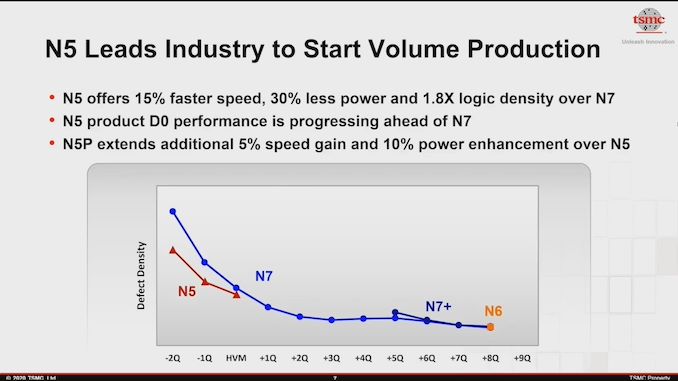 As it stands, the current N5 process from TSMC has a lower defect density than N7 did at the same time in its development cycle. TSMC. This slide from TSMC was showcased near the start of the event, and a more detailed graph was given later in the day: 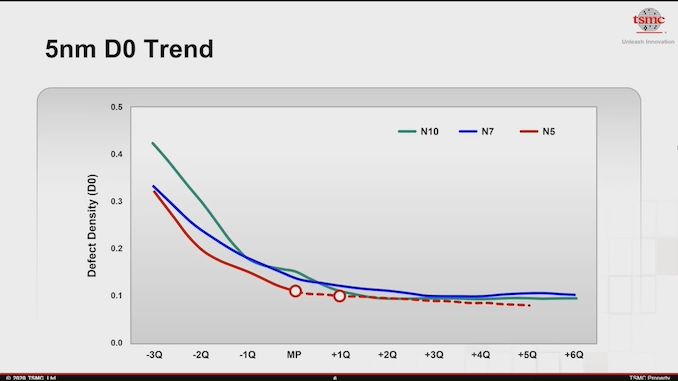 This plot is linear, rather than the logarithmic curve of the first plot. This means that TSMC’s N5 process currently sits around 0.10 to 0.11 defects per square centimeter, and the company expects to go below 0.10 as high volume manufacturing ramps into next quarter.

Part of what makes 5nm yield slightly better is perhaps down to the increasing use of Extreme UltraViolet (EUV) technology, which reduces the total number of manufacturing steps. Each step is a potential chance to decrease yield, so by replacing 4 steps of DUV for 1 step of EUV, it eliminates some of that defect rate.

TSMC’s first 5nm process, called N5, is currently in high volume production. The first products built on N5 are expected to be smartphone processors for handsets due later this year.