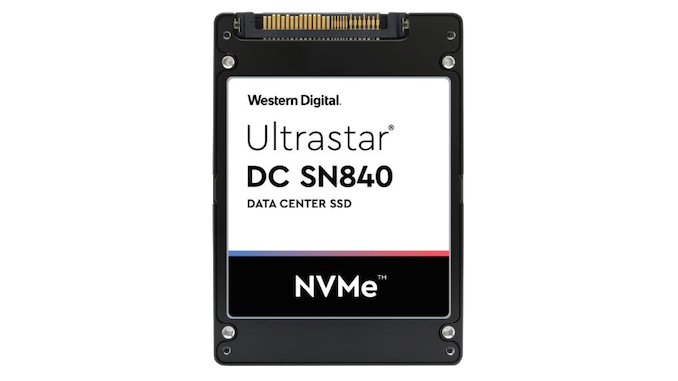 Western Digital is introducing a new high-end enterprise NVMe SSD, the Ultrastar DC SN840, and a NVMe over Fabrics 2U JBOF using up to 24 of these SSDs.

The Ultrastar DC SN840 uses the same 96L TLC and in-house SSD controller as the SN640, but the SN840 offers more features, performance and endurance to serve a higher market segment than the more mainstream SN640. The SN840 uses a 15mm thick U.2 form factor compared to 7mm U.2 (and M.2 and EDSFF options) for the SN640, which allows the SN840 to handle much higher power levels and to accommodate higher drive capacities in the U.2 form factor. The controller is still a PCIe 3 design so peak sequential read performance is barely faster than the SN640, but the rest of the performance metrics are much faster than the SN640: random reads now saturate the PCIe 3 x4 link and write performance is much higher across the board. Power consumption can reach 25W, but the SN840 provides a range of configurable power states to limit it to as little as 11W.

The SN840 supports dual-port PCIe operation for high availability, a standard feature for SAS drives but usually only found on enterprise NVMe SSDs that are top of the line or special-purpose models. Other enterprise-oriented features include optional self-encrypting drive capability and support for configuring up to 128 NVMe namespaces.

The SN840 will be available in two endurance tiers, rated for 1 drive write per day (DWPD) and 3 DWPD—fairly standard, but a step up from the 0.8 DWPD and 2 DWPD tiers offered by the SN640. The high-endurance tier will offer capacities from 1.6 TB to 6.4 TB, while the lower-endurance tier has slightly higher usable capacities at each level, and adds a 15.36 TB capacity at the top. (The SN640 is due to get a 15.36 TB option in the EDSFF form factor only.)

Between the SN840, SN640 and SN340, Western Digital's enterprise NVMe SSDs now cover a wide range of use cases, all with their latest 96L 3D TLC NAND and in-house controller designs. Shipments of the SN840 begin in July.

Using the new Ultrastar DC SN840 drives, Western Digital is also introducing a new product to its OpenFlex family of NVMe over Fabrics products. The OpenFlex Data24 is a fairly simple Ethernet-attached 2U JBOF enclosure supporting up to 24 SSDs (368TB total). These drives are connected through a PCIe switch fabric to up to six ports of 100Gb Ethernet, provided by RapidFlex NVMeoF controllers that were developed by recent WDC acquisition Kazan Networks. The OpenFlex Data24 is a much more standard-looking JBOF design than the existing 3U OpenFlex F3100 that packs its storage in 10 modules with a proprietary form factor; the Data24 also has a shorter depth to fit into more common rack sizes. The OpenFlex Data24 will also be slightly cheaper and much faster than their Ultrastar 2U24 SAS JBOF solution.

The OpenFlex Data24 will launch this fall.