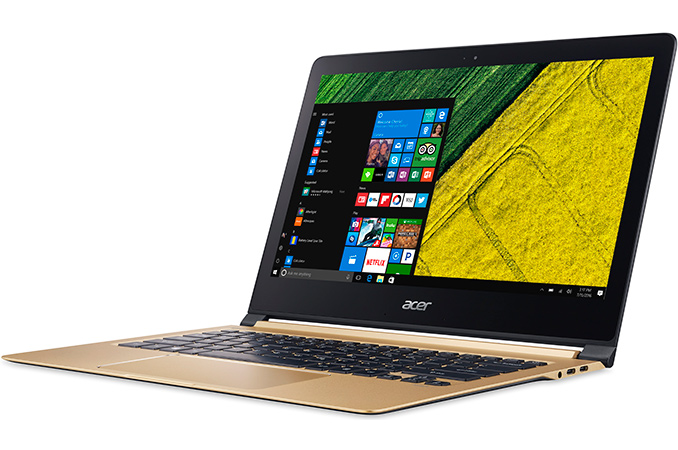 This week Acer has started to sell its first Swift 7 notebook in the U.S. The black and gold Swift 7 laptop is based on Intel’s Kaby Lake-Y-series CPU, and with an FHD display is the industry’s first clamshell PC that is thinner than one centimeter. The system is available now for $1099 from a number of retailers.

The Acer Swift 7 (SF713-51-M90J) comes in a black and gold aluminum unibody to emphasize that the device is one of the premium products in the manufacturer’s lineup. The thickness of the laptop with a 13.3” FHD display covered with Corning Gorilla Glass 4 is 9.98 mm (0.39”), which is thinner than Apple’s MacBook as well as Dell’s Adamo XPS, both of which are renowned for their thin form factors. As for mass, the device weighs 1.12 kilograms (2.48 lbs), which is a tad heavier than the MacBook.

Inside the Acer Swift 7 ultra-thin notebook there is an Intel Core i5-7Y54 processor (2C/4T, 1.2GHz/3.2GHz frequency, HD Graphics 615, 4.5 W), 8 GB of LPDDR3 RAM as well as a 256 GB SSD (the manufacturer does not specify whether it is an AHCI or NVMe). The laptop uses an 802.11ac Wi-Fi + BT 4.0 wireless adapter to communicate with the outside world wirelessly. The laptop also has a 720p webcam and two 5 Gbps USB 3.1 Type-C ports to connect peripherals, a display as well as for charging. Moving on to audio sub-system, we see a TRRS connector for headsets as well as two stereo speakers that are Dolby Audio certified.

Since the Swift 7 is powered by Intel’s Kaby Lake, expect significantly improved video encoding/decoding capabilities, better GPU performance, as well as Speed Shift v2 technology. This should make the new machine to be generally faster and snapper than ultra-thin notebooks based on previous-gen CPUs.

When it comes to battery life, Acer claims that the Swift 7 (SF713-51-M90J) has a 4-cell Li-Ion battery with 2770 mAh of capacity, which enables it to work for up to nine hours on one charge. Do note however that Acer does not specify conditions or workloads for that number.

The Acer Swift 7 (SF713-51-M90J) notebook is available directly from Acer as well as from leading retailers (Amazon, Newegg, etc.) for $1099.99. It comes with a one-year warranty. Finally, keep in mind that Acer plans to release a family of Swift 7 notebooks, as it revealed at IFA. So expect to see further models of the Swift 7, including a more affordable version based on Intel’s Core i3 at $1000, as well as a more advanced system featuring Intel’s Core i7-7Y75 and a higher price.