Tablets have always been devices where performance can be pushed further than a smartphone. There's much more thermal headroom and bigger batteries to drive high performance SoCs. Both Apple and NVIDIA have SoCs that cannot feasibly be put in a smartphone due to their heat and power usage, and these chips find their way into tablets where these factors can be managed and the additional performance can be utilized by more sophisticated applications. At the same time, some vendors opt to use the same silicon in both phones and tablets. In the case of the Galaxy Tab S2, Samsung has decided to use their Exynos 5433 SoC which previously shipped in the Galaxy Note 4 Exynos.

As always, the first group of tests are our web browser tests to characterize JavaScript performance, followed by BaseMark OS II and PCMark to evaluate the CPU and other aspects of a device's performance. 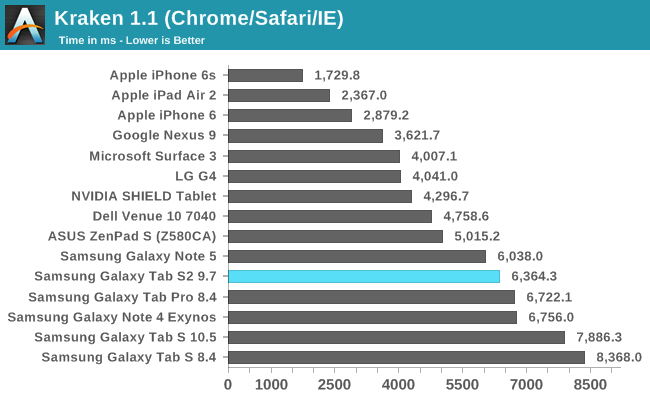 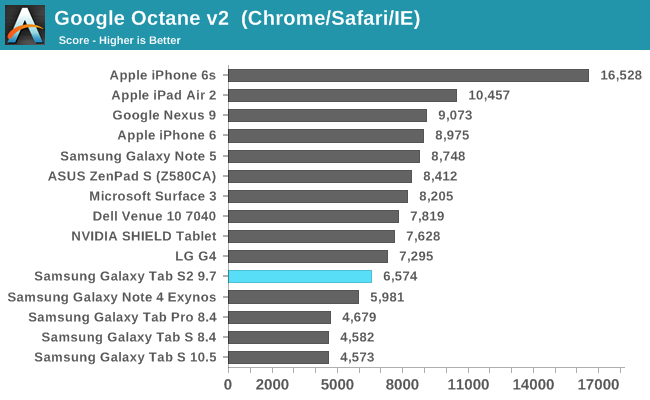 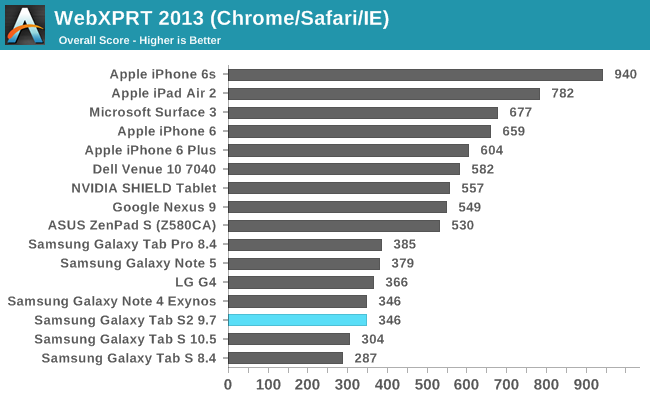 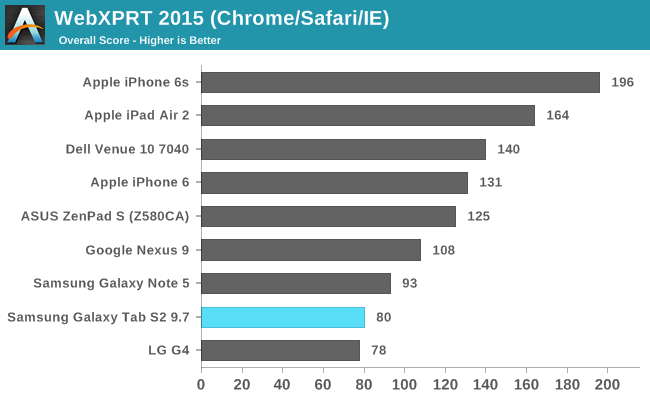 Android, and most specifically Chrome's lackluster JavaScript performance is something we've been commenting on for a while now. On top of that, the Galaxy Tab S2 simply doesn't have Samsung's latest and greatest SoC, and these factors combined together give results that aren't very impressive when one considers how much better the iPad Air 2 performs despite being over one year old at this point.

Looking at the Javascript performance in Samsung's stock browser provides some interesting but not unexpected data. It's clear that there's a much higher degree of optimization for Samsung's SoCs in their own browser than in Chrome, which isn't surprising. However, Samsung's browser isn't without its own issues. It actually crashes in the zlib test of Google Octane, and although the incomplete score of 7354 is higher than what Chrome achieves, the fact that the JavaScript code couldn't be properly executed points to some more concerning issues than performance

The other problem with using a device's stock browser for comparisons is that Android devices shipping with Google Mobile Services also include Chrome, and in my experience users are far more likely to utilize Chrome based on their awareness of the Chrome brand than they are to use the included OEM web browser. In short, while stock browser results may give a better idea of what kind of JavaScript performance a device is technically capable of, the Chrome results are more relevant when examining the performance and experience that the average user will have. 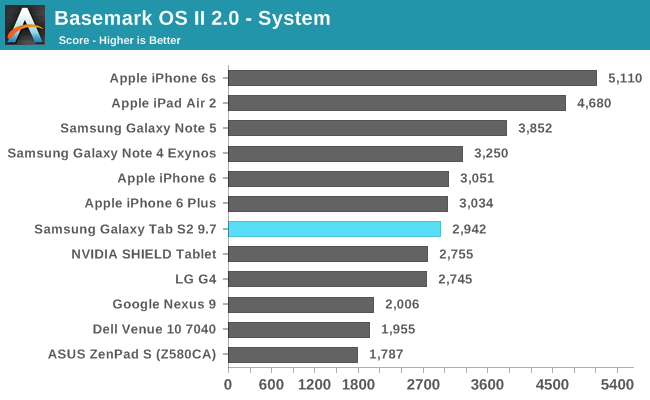 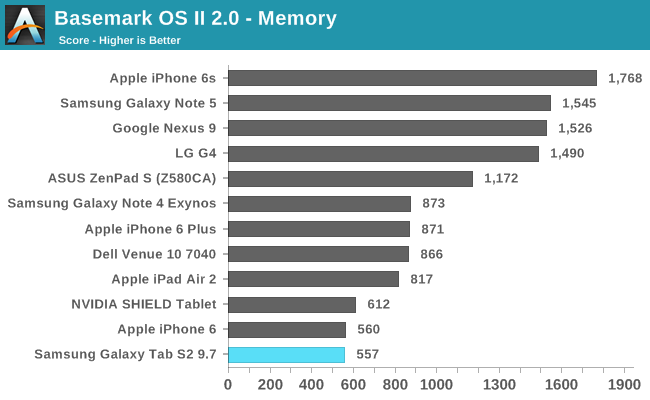 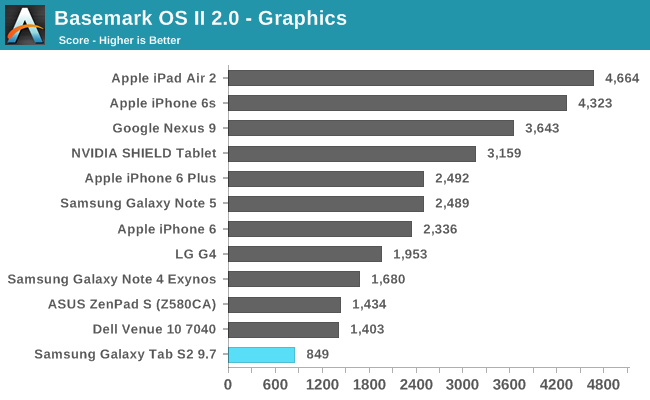 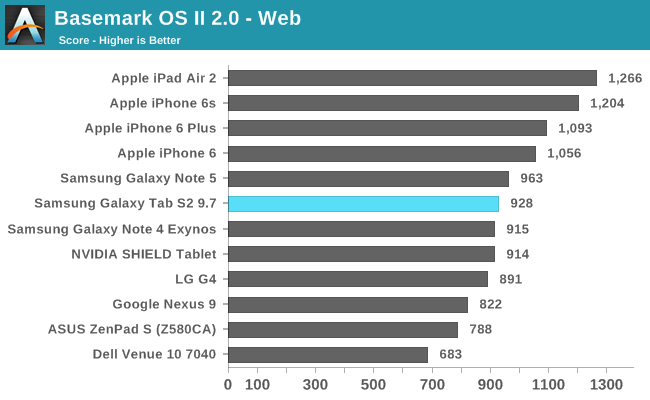 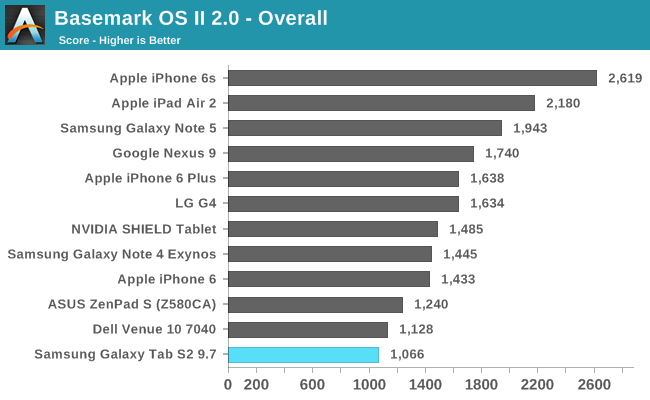 When examining the overall score in BaseMark OS II one may think that the Tab S2 performs extremely poorly. However, when looking at the sub tests it becomes clear that the overall score is being brought down by very low storage and graphics scores. What's surprising is the large gap between the graphics resuIts on the Tab S2 and the Galaxy Note 4 Exynos which uses the same Exynos 5433 SoC. I re-ran the benchmark several times to see if there was anything strange going on but there doesn't appear to be any problem with the testing, and I'm not quite sure why there's such a large gap between the two.

Moving past storage and graphics, the Tab S2 gets fairly good scores in the web and system tests. However, it still lags very far behind the iPad Air 2, and there's really no way to excuse this when both devices cost the exact same amount. 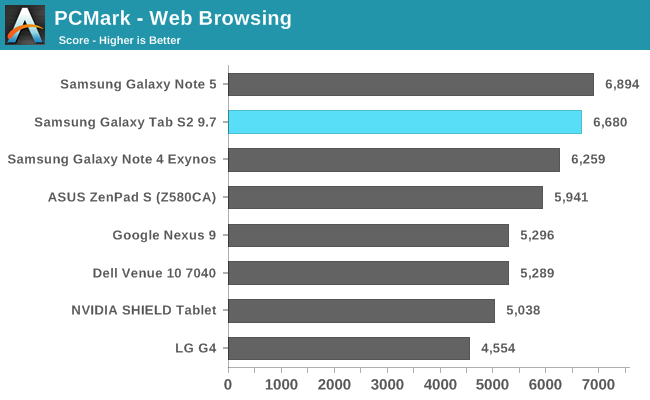 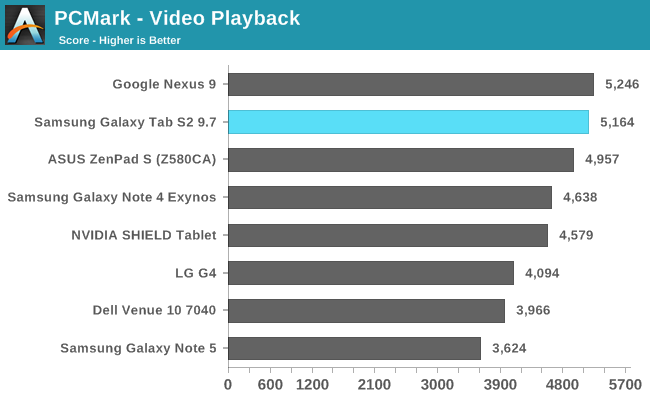 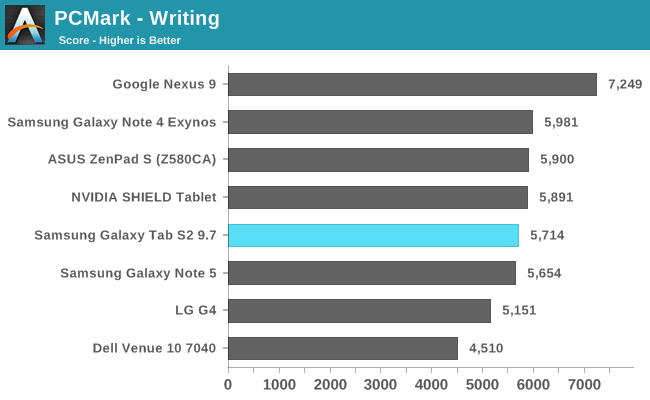 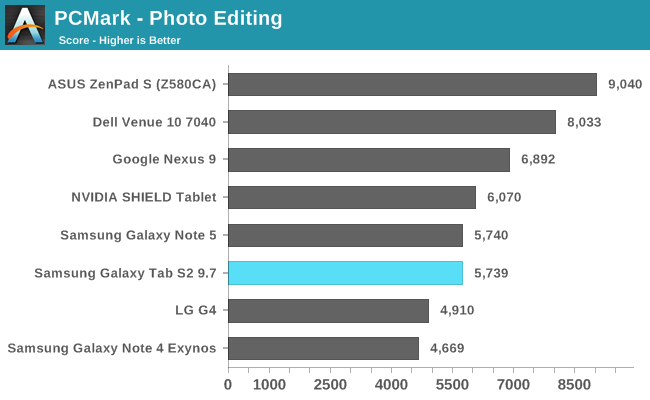 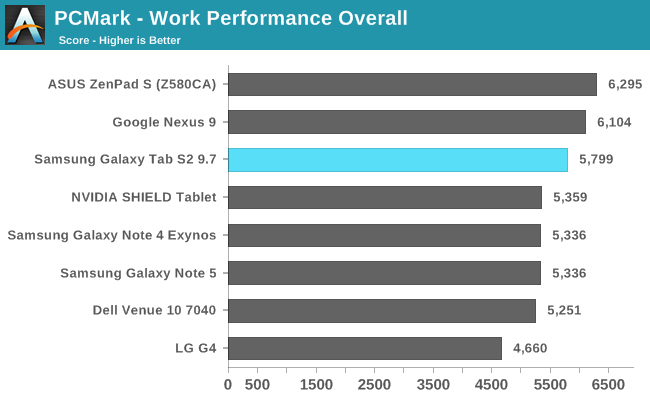 PCMark is still an Android only benchmark so the results here will strictly be comparing to other Android tablets. Overall, the Tab S2 does well. Upon examining the sub tests it can be seen that the Tab S2 is always fairly close the top of the charts, with certain devices achieving extraordinary scores in some tests which makes the Tab S2 look comparatively slower than it would be with more devices for comparison.

Exynos 5433 is not Samsung's best silicon, and even Exynos 7420 would likely struggle to compete with an SoC designed exclusively for full sized tablets. In the end the Tab S2's performance is just not competitive with the iPad Air 2 or even the Nexus 9 which is priced at $399 and often sells for even less. If I were looking at the 8" Tab S2 I would probably consider its performance acceptable relative to the competition at that size and price, but the market segment of full sized flagship tablets costing $500 or more is a completely other story.

I think Samsung definitely needs to reconsider their process of designing tablets, and part of that has to involve using chips that befit the larger size and greater capabilities of a tablet compared to a smartphone. It's in everyone's best interest to not have one company holding an enormous performance lead in any market, and if there's any company that has the capabilities, integration, and resources to fight with Apple over the tablet performance crown I would think it would be Samsung.