Mainstream smartphones seem to have settled in on a five inch display being the average, with a few just a bit larger and a few just a bit smaller. The Lumia 735, with a 4.7 inch display, is a great size for people who do not want the largest phone they can get.  Although the Lumia 735 is not created with ultra-high end materials, it carries the traditional Lumia design forward with a fully polycarbonate body finished with a glossy shell.

The 735 really feels like a successor to the original Lumia, the Lumia 800. Although larger, it features the same shape, with rounded sides and a squared off top and bottom. The curve continues into the display glass, with the sides of the glass featuring the same radius as the body, and it creates a great look and feel to the phone. The curved sides also compliment the smaller body size (as compared to the Lumia 830 and other five inch smartphones) and make it very comfortable to hold on to. 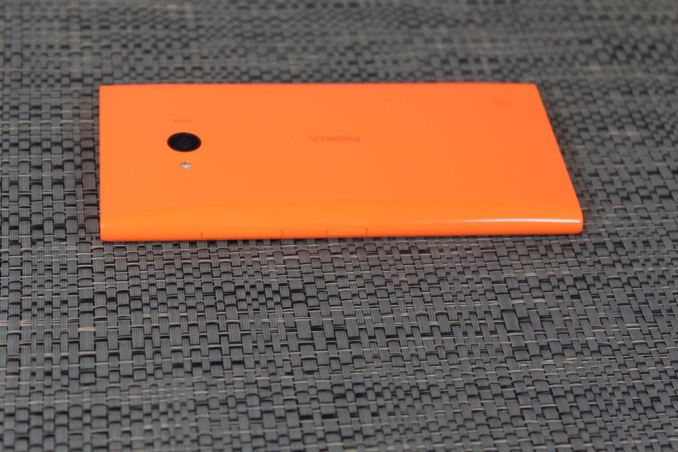 The top of the phone features the 3.5 mm headset jack, and the bottom of the phone has the micro USB connector for attaching to a PC or for charging. As with all Lumias, the left side has no buttons, and the right side features the power and volume rocker. Nokia has made a distinction with this year’s lineup of phones that any device without a PureView camera will not get a dedicated camera button, so the Lumia 735 lacks this. Windows Phone 8.1 does not have an easy way to access the camera through software other than to add the camera to the quick launch buttons in the Action Center, so this ends up being more of a burden than you would think. Also, unlike on the Lumia 830 and higher devices, the physical buttons are plastic, and are the same material as the body. They have great feedback though.

Speaking of buttons, the Lumia 735 follows in the footsteps of other devices like the Lumia 630 in that it lacks capacitive buttons for back, home, and search. The Lumia 630 compensated for this with on-screen buttons which had a dedicated number of pixels set aside for this task, but the Lumia 735 lacks this dedicated space on the display. The buttons will auto-hide when something like a photo is displayed, and can be accessed by swiping up on the display similar to modern HTC devices. I found this to be a less than perfect solution, and would prefer actual capacitive keys over losing display real estate to the on-screen versions but it does represent a dichotomy in the way of doing these - there will be users who prefer one over the other. 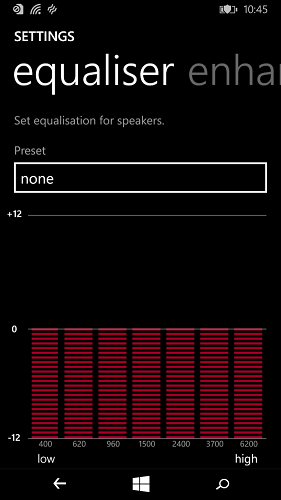 The back of the phone has a fairly minimalist look, with the Nokia logo subtly located in the center. The 6.7 MP camera sensor is in the center as well, near the top of the phone, and is flanked by the LED flash and one of the microphone grilles. There is also a faint Zeiss logo to let you know that this camera carries Carl Zeiss optics. The bottom of the back features the speaker grille. The back is also removable to get access to the micro SD slot as well as the battery. Even though the back is removable, there is no creaking or movement when installed. If you did not know the back was removable, you would think this is a unibody phone. 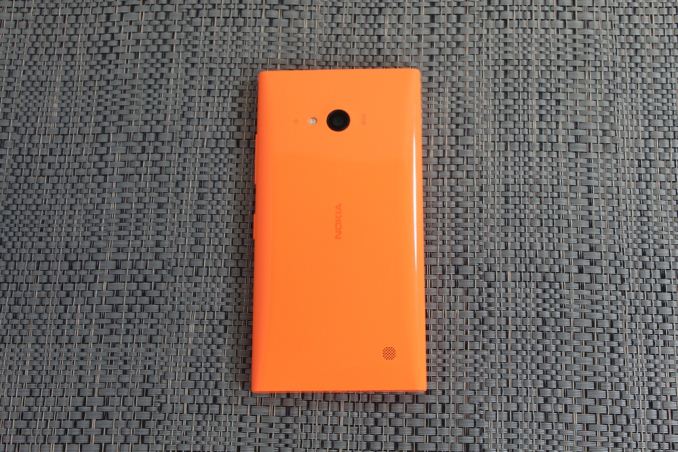 The Lumia 735 does not break new ground on industrial design or material choices, but it does continue with the traditional Lumia feel and look. The color choices are vibrant, and the orange that I received as a review unit looks great with the glossy finish. The phone fits well in the hand, and the curved glass on the front fits well with the design and provides a smooth transition to the body of the phone. Considering the back is removable, the smooth transition shows attention to detail.