The five inch display size seems to be what device makers have identified as being what people want in a normal smartphone. A good chunk of the smartphone market now has a display at or around five inches. Any larger, and the device can become unwieldy and require two hands for use (which is fine if that is what you are after) and once you use a five inch phone, those around four to four and a half inches seem kind of small. So the Lumia 830 comes in with the same display size as the Lumia 930 right at five inches. 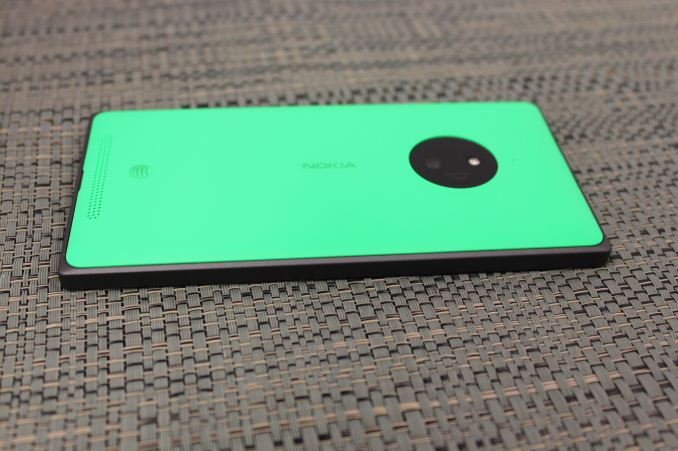 Where the Lumia 930 started to go wrong, at least for me, was that it was too thick and too heavy. It could have likely gotten away with the thickness if the sides were rounded off, but the Lumia 930 took cues from the Lumia 928 and had squared off sides, with a slightly contoured polycarbonate back. The premium feel came from the metal edge wrapped around the phone.

The Lumia 830 shares the same basic design as the Lumia 930, with a squared off side made of aluminum, and a contoured polycarbonate back. The 830 is a bit thinner and a bit lighter than the Lumia 930, and it sounds small on paper but it really changes the in-hand feel of the phone. The 930 would slightly dig into my hands with the sharp contours, but the Lumia 830 does not do this at all. In hand feel is very good. To make this device as thin as they did, the manufacturer has designed its thinnest Optical Image Stabilization (OIS) system to date. The thinner OIS is likely in part due to the smaller main camera sensor.

The Lumia 830’s polycarbonate back comes in several colors, as is the norm for Nokia phones. The 830 is available in white, black, green and orange. Devices sold with a black back will have a dark grey aluminum strip around the outside, whereas the other colors come with a bright silver band. One great feature of the Lumia 830 over the 930 is that on the 830, the back is removable. Simply pry up at the bottom where there is a small slot, and the back pops off to expose the 2200 mAh battery, SIM tray, and microSD card slot. The 930 did not have microSD, so this is a bonus for the 830 for sure. People who swear by removable batteries will also be happy with this change. It gives the 830 a similar, but somewhat better in-hand feel over the 930, but keeps the perks of a removable back. Hopefully this is something we will see continue on future Microsoft branded handsets. 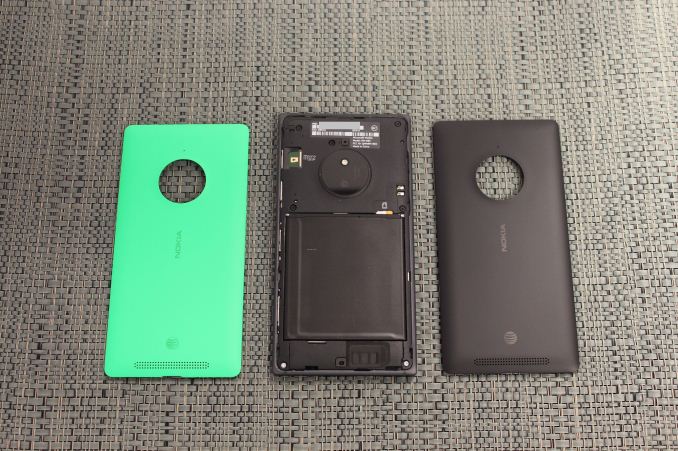 At the top of the phone we have our normal 3.5mm headset jack, and for the first time in a while on a Nokia Windows Phone, the USB port is also at the top. I prefer the port at the bottom myself, but it certainly is not a big enough deal to worry about. The Lumia 830 supports Qi wireless charging in the case, perhaps indicating a potential usage shift for the Lumia market. In order to make this shift more palatable, it would make sense if some vendors may bundle a Qi charger.

On the right side is the three Windows Phone hardware buttons which are the volume, power, and a two-stage camera button. Nokia's Windows Phones below the 830 have gotten rid of the camera button, which is a poor choice right now since the operating system is not set up to handle this very well, so it is great to see it on the 830. As far as the range of Nokia phones goes, it appears those branded with “PureView” cameras will have OIS and a camera button, so the Lumia 830 fits the bill here.

On the left side, there are no buttons to take away from the aluminum feel. On the bottom, there are also no buttons and no features at all except the two plastic strips which separate the aluminum bands to allow them to be used as antennae. 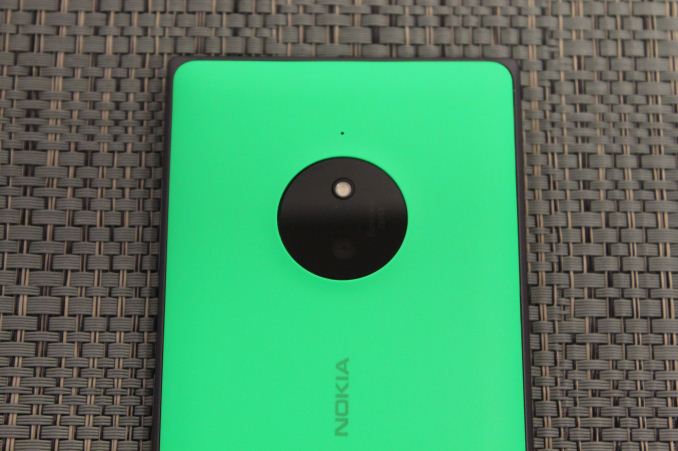 The design is one of the highlights of the Lumia 830, and perhaps this is where they get the “affordable flagship” name from. It has a premium feel about it with the aluminum strip, but loses none of the benefits of phones such as the Lumia 930 and keeps the removable back.