Windows 10 Technical Preview First Impressions: The Return Of The Desktop

Universal Apps and the Windows Store

We just got done discussing why a single user interface for the OS across multiple devices is not always the ideal solution, so of course the obvious question with Universal Apps is why would you want it with the app model instead? Thankfully this is not the case although the term Universal App might lead people to believe they are attempting to have a single app target all of their platforms. The truth of the matter is that Universal Apps are Universal in the sense that they share a common app store.

If Microsoft is going to have Windows 10 succeed on desktops, laptops, tablets, phones, and even Xbox One, they need developer buy-in. A platform without apps is not much use to anyone. With the Universal App, they can bridge all of their platforms with a single App in the store. Under the hood, each app is created with a common framework of code, as well as multiple user interfaces in order to tailor the experience to the correct device type. Below is a screenshot of Visual Studio – Microsoft’s developer tools – with a new Universal App about to be created. 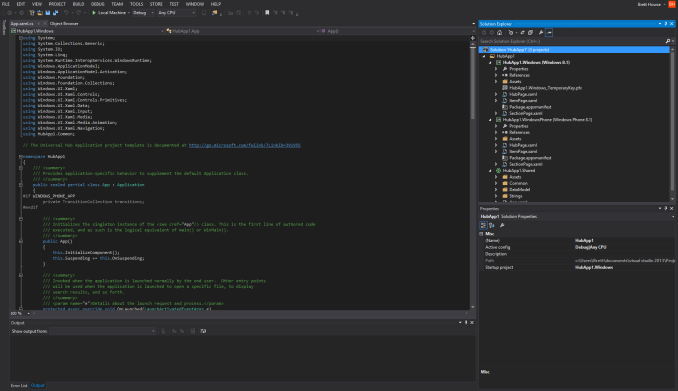 As you can see, there is a shared portion of code, and then a project for the UI for Windows 8.1, and Windows Phone 8.1. Xbox One is not available yet, but should be added in a future release of Visual Studio. 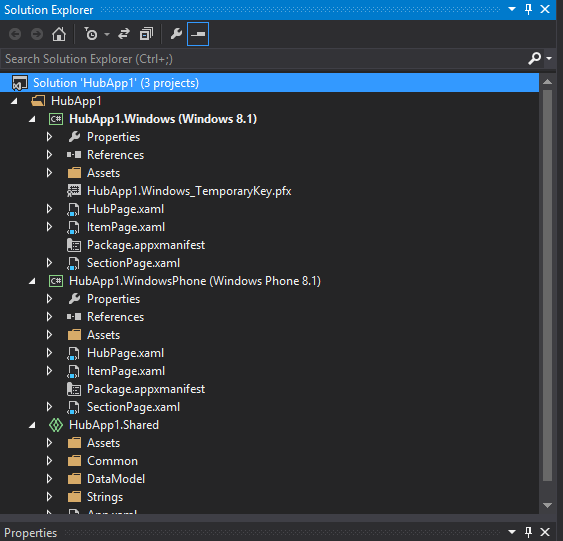 A close up of the projects

But you may be wondering why any of this is necessary. Windows has the largest selection of applications of any system ever. That is of course true, and the Win32 framework has served both Windows and its users well over the years. But with the new WinRT framework there are some big advantages. First, it can be written to in multiple languages including HTML. WinRT supports C++/CX, C#, VB.NET, and HTML scripting with JavaScript and TypeScript. The security model for WinRT apps is a lot different than Win32, with all WinRT apps running in a sandbox mode for higher security. Unlike apps written in .NET, WinRT is native code, which should result in better performance. Contracts and Extensions are also new to WinRT, and allow apps to share data while still being in a sandbox. One of the biggest advantages of WinRT is that it is DPI aware, and can automatically scale apps appropriately based on screen size and screen resolution. Here, as we know, Win32 apps can struggle even though there are solutions in place.

One of the biggest disadvantages of WinRT is that it is only available on Windows 8 and newer devices. With Windows 8 struggling in the market as compared to Windows 7, the user reach of a developer targeting WinRT apps in the Windows Store would be for a subset of the total user base. With Windows 7 having over 50% of the desktop OS market share to itself, this is going to be an issue.

With Windows 10, Microsoft is certainly targeting Windows 7 users. If they can convince them to upgrade to the latest version of the operating system, then the new environment will have a much larger target base and will hopefully encourage developers to target the Windows Store. We have not heard of any upgrade promotions or pricing yet, but this is one of the biggest advantages Apple has had over the years. Their user base generally upgrades the OS at a much faster uptake than Windows. This allows developers to utilize newer APIs in the latest versions of their operating systems and keep the platform progressing. Microsoft has already had to deal with people being stuck on Windows XP, and they must be wanting to avoid that with Windows 7.

Since we are discussing Universal Apps and their advantages, one of the biggest advantages is the Windows Store. With Microsoft hosting the entire download and purchase of all WinRT apps, having user settings and apps sync from one device to another is much easier. One of the greatest experiences with Windows 8.1 is signing into a new PC for the first time. When you log in with your Microsoft Account, the system asks you if you would like to copy the devices and apps from one of your other devices, or if you want to start with a clean machine. If you choose a previous machine, all of the settings, wallpaper, Start Screen layout, and Windows Store apps are synced to the new device. In the case of Windows Store apps, the app itself is listed on your Start Screen, but it is not downloaded until the first time you select it. This avoids a situation where you will significantly delay the initial login time with a massive download, as well as avoid filling the available storage with apps you may not need on that particular device. 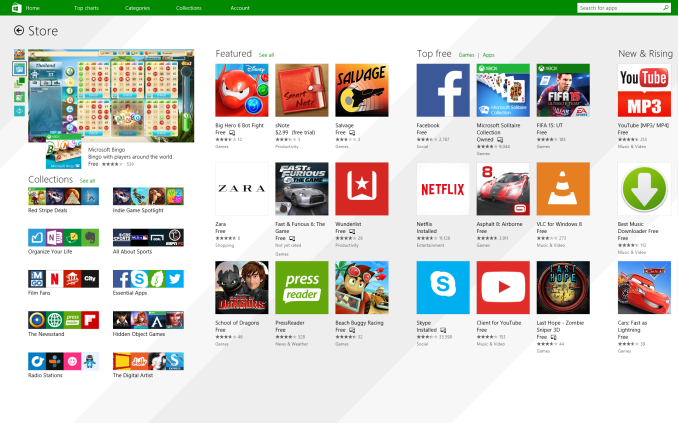 Also, like modern tablet and smartphone OSes, WinRT apps from the store are automatically kept up to date by the store. This avoids a lot of the issues with viruses and malware attacking an older version of a product since in theory it will not be around any longer.

The one thing missing from this are the older Win32 apps on the desktop, because they are not available in the Windows Store. Prior to Windows 10, desktop apps could be listed in the store, but the store would then link to the developer’s website to allow you to purchase and install the app. With Windows 10, rumors are that desktop apps will also be available and managed through the Windows Store. Assuming this does happen, then this will be a major boon to users. Desktop apps should in theory also be able to be kept up to date using the Windows Store which should cut back on the number of outdated pieces of software targeted by malware.

The Windows Store is a key piece of Windows 10. Universal Apps can be made available for multiple platforms through the store, and, if the rumors are true, even desktop apps will be available through the store. This should make the Out Of Box Experience (OOBE) very good for users with a Microsoft Account. The WinRT framework has not yet had the killer app written for it, so hopefully with Windows 10 the framework will be expanded to allow for more powerful apps to be created.