The Western Digital My Cloud EX2 is bundled with a 36 W(12V @ 3A) adapter. The power adapter is customized to the country of sale. A network cable is also included in the package. Our evaluation started with a diskless system. Western Digital has diskless, 4 TB, 6 TB and 8 TB systems in the lineup. The systems with disks use two WD Red drives of equal capacity.

Unlike the WD EX4, the hot-swap mechanism is not completely tool-less. After popping open the top of the EX2 unit, a metal flap needs to be unscrewed and the disks need to be pulled out with an attached tag (refer to the pictures in the gallery below). This requires a little bit of force while tugging. Considering that consumers have been taught to treat hard disks as fragile and not to be subjective to excessive force, this is not a pleasant experience. The EX4's hot-swap mechanism and drive-bay arrangement seems to be much better compared to the EX2's, despite the EX2 having what appears to be a better industrial design. The unit has a GbE port, two USB 3.0 ports and a DC power inlet on the rear side of the unit.

There is a very small fan inside the unit (can be seen in the last picture of the above gallery), but it is pretty much inaudible during normal operation.

The WD My Cloud EX2 is based on the Marvell ARMADA 370 / MV6710 SoC. We have not reviewed any NAS based on that platform till now. So, we will take a look at the features provided by the ARMADA 370 first. 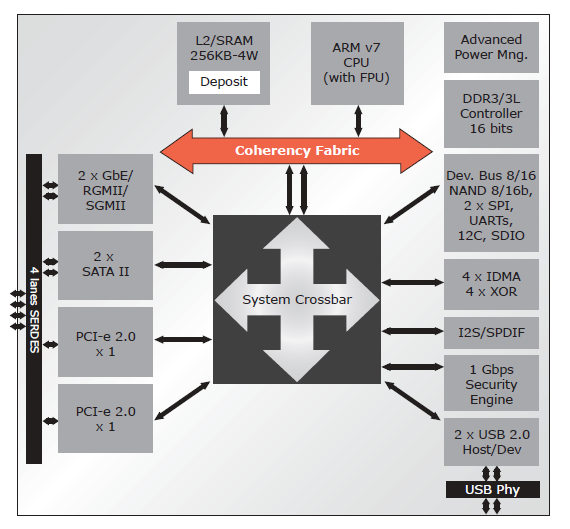 We find that the SoC provides 4 SERDES lanes, which should be enough for 1 GbE port, two SATA ports and one PCIe lane. The PCIe lane is used by the USB 3.0 to PCIe bridge. Though we didn't get time to do a full teardown and get the part number of the USB 3.0 to PCIe bridge, it is quite likely to be the Etron EJ168A that was used in the EX4. The two SATA ports serve the two drive bays. This configuration seems to provide better balance compared to the EX4 (except for the fact that the two USB 3.0 ports can't both operate at full speeds as the two SuperSpeed ports (10 Gbps) are bottlenecked by the single PCIe 2.0 lane (5 Gbps) connecting it to the ARMADA 370).

After connection to the network, the unit obtains a DHCP address (even in diskless mode) and could be setup using the web UI at http://<WD-EX2-IP>.  The UI on the EX2 is the same as the EX4, so we won't go much into the available options in this review. The obvious difference between the EX4 and the EX2 is in the supported disk configurations. While the EX4 can do JBOD, Spanning, RAID-0, RAID-1, RAID-5, RAID-6 and RAID-10, the EX2 can only do the first four.

Our testing sequence started with the insertion of a single disk and configuring it in JBOD. After adding another disk, we were able to migrate to RAID-1. However, the data wasn't online as expected during the process. The resultant RAID volume also appeared to be completely empty. However, creating the same share names as before proved that the data was intact. WD was able to replicate this issue in-house and a fix is expected to be out in one of the upcoming firmware releases. The firmware also doesn't have detailed logs for perusal (this is an issue on the EX4 too).

The EX2 datasheet mentions a limitation of 10 concurrent CIFS connections. In the process of putting the EX2 through our multi-client test (25 machines accessing separate CIFS shares simultaneously), we encountered lots of timeouts (but, the tests did complete after repeated tries). We haven't seen this type of limitation in other 2-bay NAS units (ARM or x86-based). WD indicated that this was more of a marketing positioning of the product. The device apparently does support over 10 users, but the unit is specifically tested considering 10 to be the overall use case for this product. WD suggests that users requiring more simultaneous CIFS connections move to products targeted towards SMBs (those based on the x86 / Windows Storage Server). Though it might be difficult for today's average consumer to hit 10 concurrent CIFS connections, it is not outside the realm of power users with multiple devices in their household.