In and Around the NZXT Phantom 530

Up until this point I'd been pretty bullish about new NZXT enclosures, and with good reason. NZXT's designs have displayed a new vitality since the Phantom 820; these cases have focused with almost laser precision upon being both extremely to use and build inside and rich with features that aren't just checkboxes but legitimately useful. The integrated fan hub/controller is practical, the LED lighting for the rear I/O is handy, and NZXT's shuffling of internal storage bays has been fairly innovative.

Yet despite all of this being carried over to the Phantom 530, I can't help but feel like they've gone to this well too many times. The Stormtrooper aesthetic continues to carry over with the 530; a white LED lighting strip is next to the door that sits in front of the 5.25" drive bays (where the reset button is also smartly hidden) while a black mesh shields the front intakes. The top of the case sports the power button, rear I/O lighting toggle, fan control, and USB and audio connectivity, and a black mesh extends to the back.

Users who appreciate the Phantom's traditional unusual side panel design will feel right at home here; there's an angled window and a vented fan mount, but the fan mount's placement is actually kind of unusual. It half-hangs over the drive bays, yet it doesn't seem to be high enough to adequately feed the graphics card(s). The side panels are thankfully hinged, and both are held in place with thumbscrews. 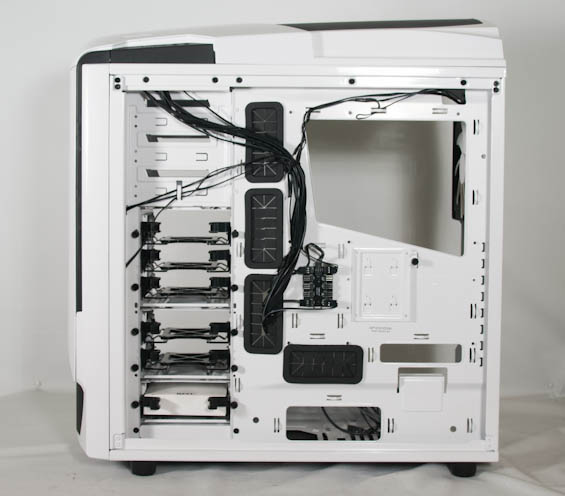 Remove them, and you find pretty robust clearance behind the motherboard tray, along with a slightly angled indentation around the tray for cable routing. NZXT is sticking with having the drive trays slide into the case from the rear of the tray, which does make sense for connecting hard drives. I'm also happy to again see a behind-the-motherboard 2.5" drive sled, and the fan controller/hub comes with two fans already connected, two extension cables, and then four additional empty connectors, all side-mounted. 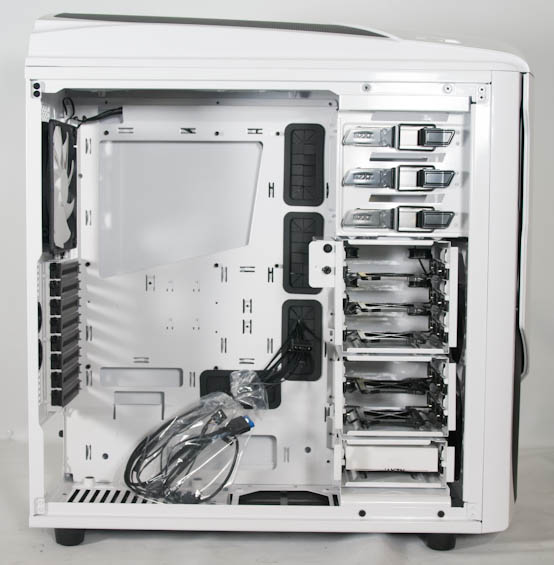 Meanwhile, the interior proper of the Phantom 530 is very familiar to anyone who's already seen the 630. NZXT again employs their slick trio of modular drive cages: one holds three drives, one two, and one a single drive, allowing you to only use as many cages as you actually need with no wasted space. There's an internal 140mm fan mount to direct airflow, toolless clamps for the 5.25" drive bays, and the motherboard standoffs come preinstalled.

Undoubtedly I'm going to be too rough on NZXT for the Phantom 530; the design brings a lot of features and quality to the $129 price bracket, but nothing here feels new. After a slick refinement like the Phantom 630 and an outside-the-box take on silent chassis design with the H630, the Phantom 530 feels incredibly staid. When Corsair was filling out their product line, they still took each iteration to gradually advance their designs, but with the Phantom 530, NZXT is playing things safe. It's not a knock on the case itself, but an expression of disappointment in seeing NZXT take the conservative route and plumb this brand harder instead of trying to strike out with a new brand.