Although boot performance doesn't change substantially with the faster CPU, I did notice that the new system was posting better boot times than what I had previously recorded. My guess is all of my SSD torturing hadn't been TRIMed away before I presented the previous results. Either way the new MBA seems capable of a sub-12 second boot time. I even recorded some boots as low as 10.8 seconds. That PCIe SSD comes in handy for sure. 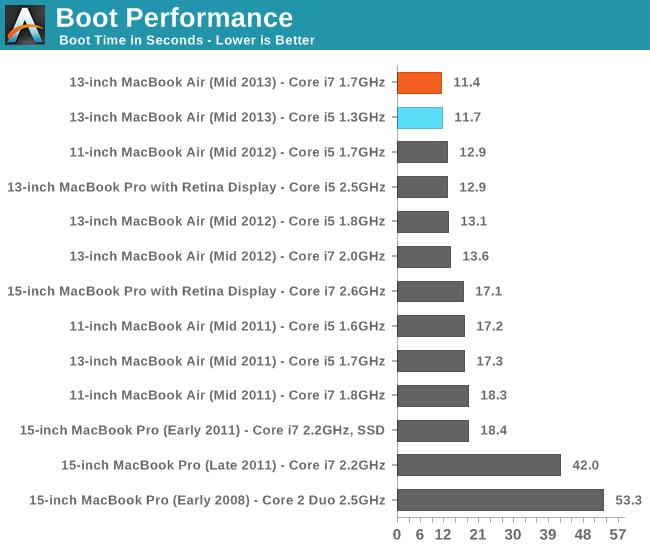 These next two charts look at single and multithreaded floating point performance using Cinebench 11.5. This test also gives us the rare opportunity of comparing to some older Mac Pro hardware as well from 2008 - 2010. Single threaded performance remains extremely important to overall system responsiveness, so it's always good to look at. 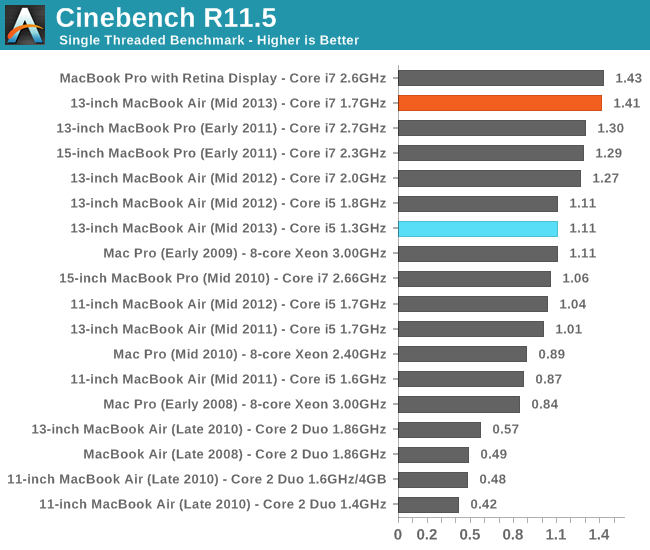 Oh man, the Core i7 upgraded seriously fixes everything. We get near perfect scaling here, showing a massive 27% increase in performance over the default Core i5 1.3GHz setup. The single threaded performance of the upgraded 13-inch MacBook Air is almost able to equal that of the 15-inch MacBook Pro with Retina Display. Anyone underwhelmed by Haswell should keep this in mind. What we're seeing here is a combination of IPC improvements and awesomely aggressive turbo, all within a 15W TDP. 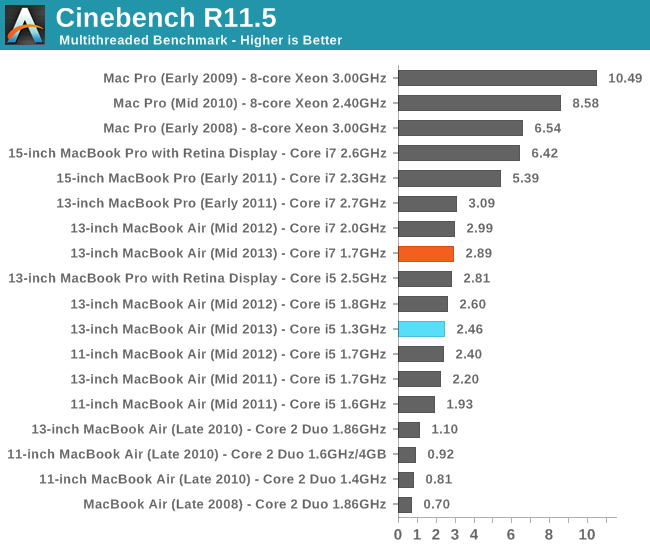 The multithreaded story is a bit less impressive, but still quite good. Showing a 17% increase in performance, the 1.7GHz Core i7 delivers nearly the same performance as the 2GHz Core i7 upgrade from last year's MBA. The rMBP15 distances itself from the MacBook Air though - there's no replacement for more cores.

Video transcoding is really best suited for the higher end machines, but that doesn't change the fact that it's done on MacBook Airs as well. We'll start by looking at performance under iMovie. Here we're importing 1080p video from a Nikon D7000 and optimizing it during import. 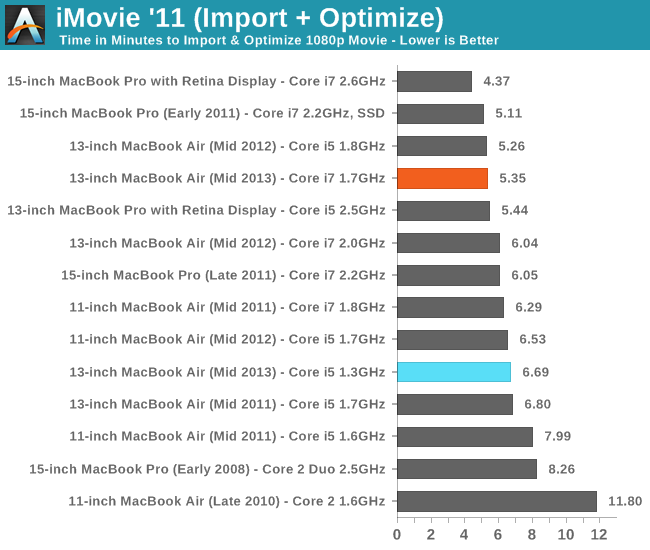 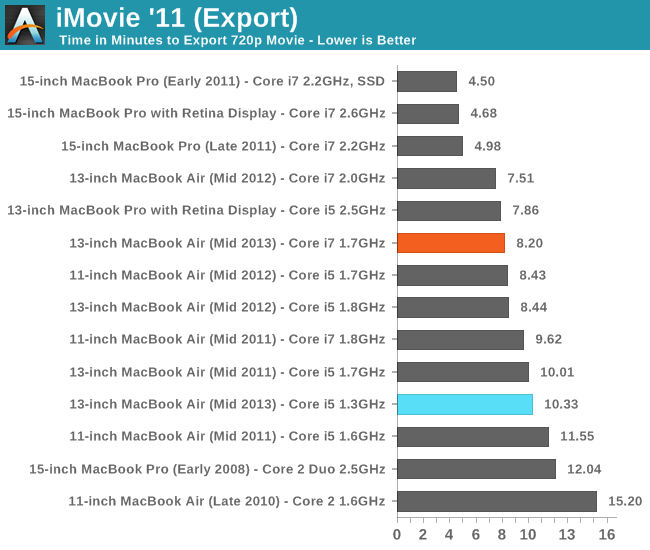 We're showing ~25% reductions in import and export time here over the base configuration. In both cases, performance equivalency with last year's upgraded configuration seems restored.

Final Cut Pro X falls on the professional end of the video production spectrum. The test file is the same here, but the workload is far more strenuous. 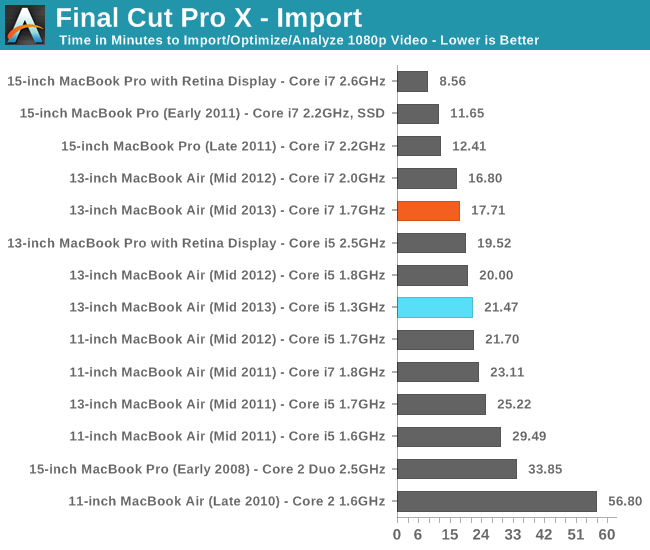 The same is true for our FCPX test. Last year's 2.0GHz model is about 5% quicker than this year's 1.7GHz Haswell ULT system, but obviously with the newer machine you get much better battery life. The improvement over the base CPU configuration is over 20% again.

Our photo editing & export tests agree with what we've seen elsewhere. The gains here are north of 20% and put the i7 system within range of last year's 2GHz model. 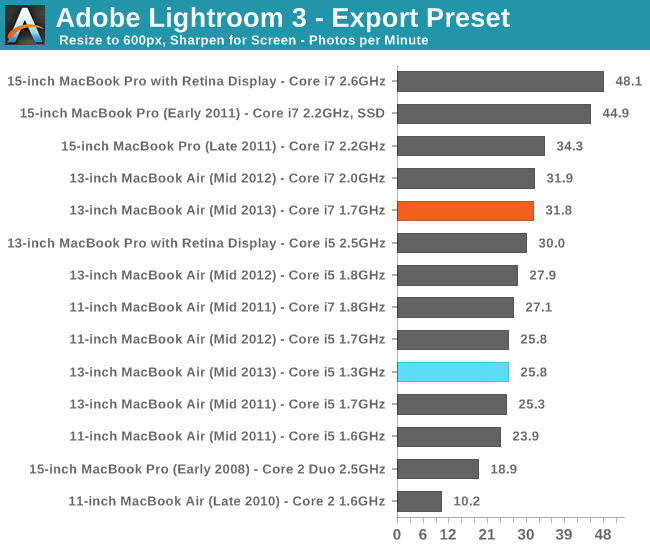 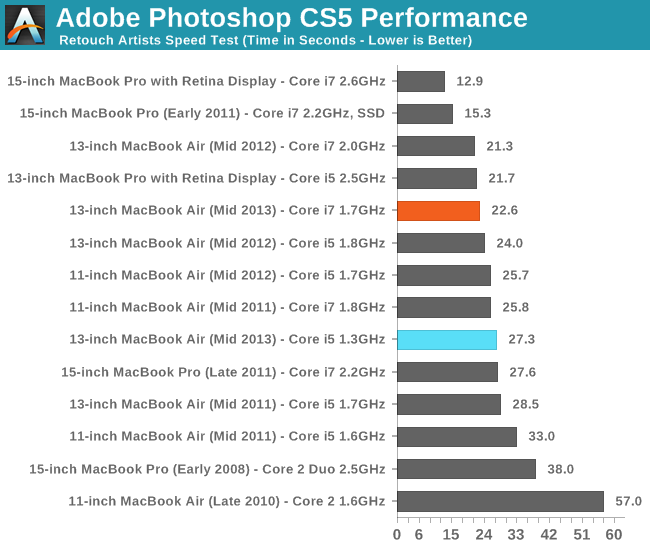 In our desktop review of Haswell I noted that performance in our compile test improved tremendously with the new architecture. As it's quite obvious that Haswell's IPC advantages don't surface all that much in our traditional suite, I wanted to see if perhaps things would be different in something that might lend itself better to Haswell's IPC improvements. I repeated our Firefox build test but under OS X. It's a multithreaded compile, with the number of threads set to 2x the number of cores (not threads) in a system. 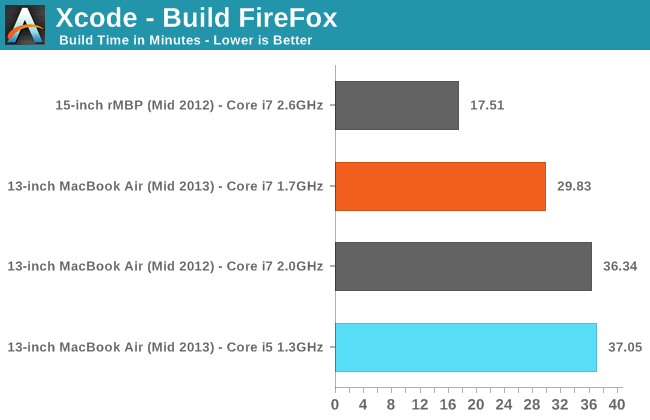 When Haswell's IPC advantage can shine, the higher clocked configuration does even more so. Here the 1.7GHz Core i7-4650U is over 20% faster than the fastest MacBook Air you could build last year. Serious developers will still want more cores but if you need ultimate portability, Haswell ULT really can shine.

Introduction Core i7 vs. Core i5: Understanding the Power Story
Tweet
PRINT THIS ARTICLE
Comments Locked