Although Haswell’s platform power is expected to drop considerably in mobile, particularly with Haswell U and Y SKUs (Ultrabooks and ultrathins/tablets), there are benefits to desktop Haswell parts as well. 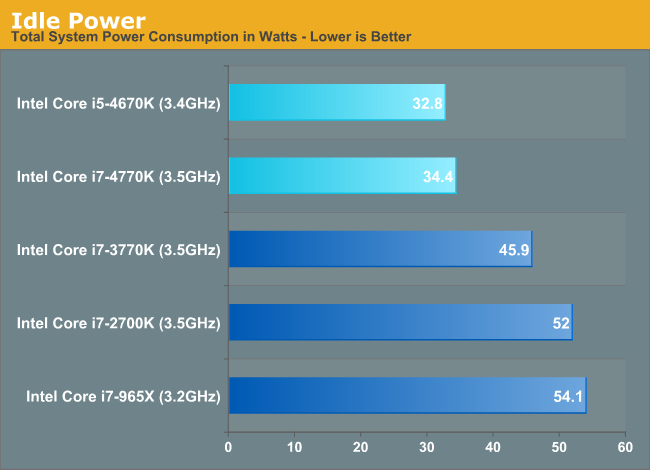 These savings are beyond what I’d expect from Haswell alone. Intel isn’t the only one looking to make things as best as can be in the absence of any low hanging fruit. The motherboard makers are aggressively polishing their designs in order to grow their marketshare in a very difficult environment.

Under load, there’s no escaping the fact that Haswell can burn more power in pursuit of higher performance: 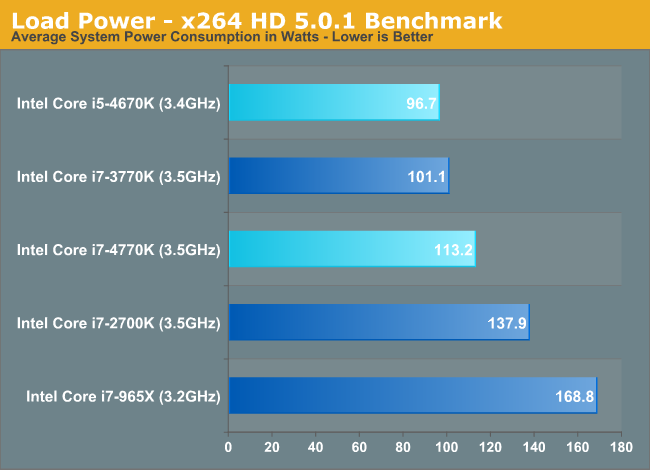 Here I’m showing an 11.8% increase in power consumption, and in this particular test the Core i7-4770K is 13% faster than the i7-3770K. Power consumption goes up, but so does performance per watt.

The other big part of the Haswell power story is what Intel is calling FIVR: Haswell’s Fully Integrated Voltage Regulator. Through a combination of on-die and on-package circuitry (mostly inductors on-package), Haswell assumes responsibility of distributing voltages to individual blocks and controllers (e.g. PCIe controller, memory controller, processor graphics, etc...). With FIVR, it’s easy to implement tons of voltage rails - which is why Intel doubled the number of internal voltage rails. With more independent voltage rails, there’s more fine grained control over the power delivered to various blocks of Haswell.

Thanks to a relatively high input voltage (on the order of 1.8V), it’s possible to generate quite a bit of current on-package and efficiently distribute power to all areas of the chip. Voltage ramps are 5 - 10x quicker with FIVR than with a traditional on-board voltage regulator implementation.

In order to ensure broad compatibility with memory types, there’s a second input voltage for DRAM as well.

FIVR also comes with a reduction in board area and component cost. I don’t suppose this is going to be a huge deal for desktops (admittedly the space and cost savings are basically non-existent), but it’ll mean a lot for mobile.

You’ll notice that I didn’t mention any of the aggressive platform power optimizations in my sections on Haswell power management, that’s because they pretty much don’t apply here. The new active idle (S0ix) states are not supported by any of the desktop SKUs. It’s only the forthcoming Y and U series parts that support S0ix.