In and Around the Lian Li PC-TU100

If you read our review of the Lian Li PC-TU200, what you're going to see with the PC-TU100 should be fairly familiar. What's different is the scale, and in scaling the design down, Lian Li removed most of the elements I found problematic in that larger chassis. When you're dealing with a small form factor enclosure, elbow room is at a premium, and I wasn't as happy with the compromises made in the PC-TU200 as I am here.

First, the PC-TU100 continues to enjoy that all-aluminum construction that's a trademark of Lian Li enclosures. I'm not a tremendous fan of aluminum; like any building material, it needs to be appropriate to both the design and usage of the product, and so in some of Lian Li's larger enclosures I've often felt that it was the wrong choice. In the PC-TU100 it makes sense, though; the large handle on the top of the case is a pretty big clue as to what Lian Li intends it for. The case itself is very light and easy to lift with the handle, even after it's been outfitted with hardware.

Our review case is entirely black, with two USB 3.0 ports and a pair of audio jacks in the front beneath the intake vent. Between the vent and the slimline optical drive bay is the power button; the reset button is next to the I/O. I can't help but feel like the 120mm fan, the only active or passive cooling in the case, is a missed opportunity, though. There's definitely space for at least a 140mm fan, which would offer both superior airflow and potentially lower noise levels, but alas, the mount is designed only for a 120mm fan. 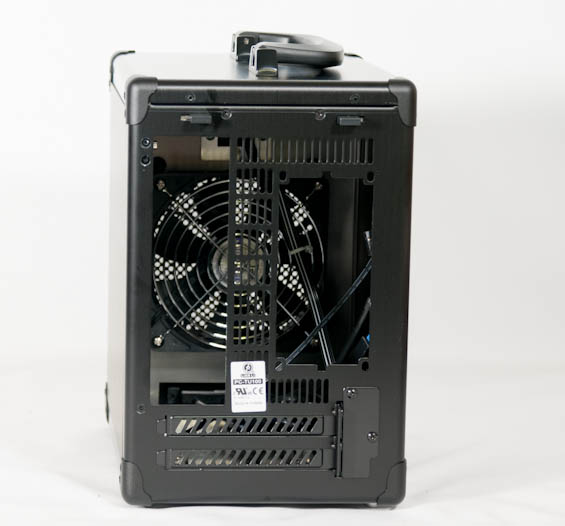 As I mentioned before, a handle is built into the top of the PC-TU100, and it's plenty sturdy enough for carrying around the case with a full computer built inside. On the bottom are four metal feet, while the back of the case is well ventilated. There's a single vent in the left side panel, above where the power supply would mount, to allow fresh air to enter the PSU separately from the rest of the system. Note the two levers on the back of the case; the side panels aren't held in by thumbscrews but are instead "popped out" using these levers. 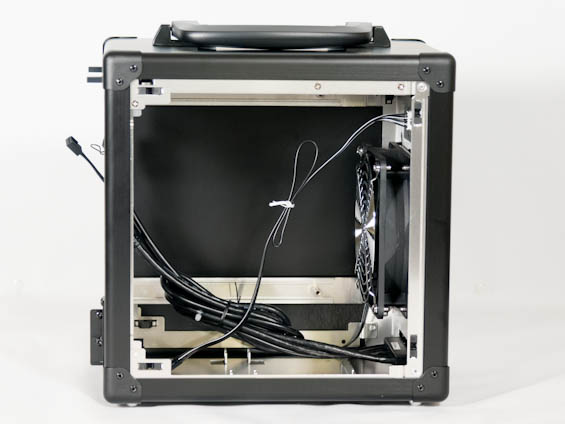 When you do open up the PC-TU100, you reveal what is in my opinion the simplest interior Lian Li has ever designed. Lian Li interiors are typically busy and sometimes slightly daffy affairs, but there's just no room for any kind of craziness inside the PC-TU100. You get a removable drive tray at the top for the slimline bay, and two 2.5" drive mounts in the bottom of the case. Smartly, Lian Li includes a grill for the fan inside to prevent cables from getting caught in the blades.

This is definitely one of the better designed Lian Li cases I've tested, but there's still room for improvement. I sometimes feel like nobody at Lian Li actually builds their computers with these things; if there were, the front wouldn't be so scattered. It's not an aesthetic issue, but a practical internal one. The I/O, including the power switch, should all be in one place, preferably beneath the slimline bay, or vertically arranged to the side of the intake fan. There's also virtually no reason why the intake fan should be just 120mm instead of 140mm, and it could be better placed to help feed both the expansion slots and the CPU instead of just the CPU. These are minor complaints, but they would go a long way towards both cleaning up the interior a little bit and potentially improving performance.