Dell XPS 12 Review: A Jack of All Trades Flipscreen Ultrabook

It’s pretty clear that the raison d’être for the XPS 12 is to be a convergence laptop and tablet hybrid. This is accomplished via the flipscreen, allowing the device to switch from being a regular laptop into tablet mode. There are other devices that do something similar, as I discussed in a blog last month, but right now to my knowledge Dell is the only company that’s trying to go with a flipscreen. Sliders, tablets with a detachable keyboard, twist hinges, and even foldable laptops are out there, and they all go after the same problem: how to make a device that’s both a laptop and a tablet work well. I’m going to tackle the subjective evaluation in two parts, first as a laptop and second as a tablet, but first let’s cover some of the core design elements.

One of my biggest concerns when I first saw images of the XPS 12 was the durability of the flipscreen. Since the whole display section has to be free to pivot, I was worried the frame would feel flimsy and might wear out sooner rather than later. While I can’t say how well the hinge and pivot points will hold up long term, I can say that they actually feel quite solid in practice—the frame is reasonably thick and made of metal and inspires confidence that it will last for a while. The flipping action also works nicely, with strong magnets that lock the display into place in either orientation. The build quality for the rest of the XPS 12 is also good, and I like the carbon fiber covers on the bottom and the back of the LCD. Overall, the XPS 12 is definitely a step up from Dell’s other consumer branded laptops.

One drawback of the flipscreen is that the screen portion of the XPS 12 is quite a bit thicker than on most Ultrabooks. Part of that might be necessary additional thickness to accommodate the touchscreen, but in order to make the flipscreen work I think Dell added an extra two or three millimeters to the display portion of the chassis to make it more durable. As a point of reference, I measured the display on the Acer S7 at around 4mm compared to roughly 7.5mm on the XPS 12. For an Ultrabook, that’s a pretty significant difference, but since the XPS 12 is still reasonably thin I won’t belabor the point. Just know in advance that it’s going to be thicker than some of the competing options.

One other point to bring up before getting into the laptop/tablet specifics is that the WiFi stack on the XPS 12 (an Intel 6235 with Bluetooth) is for some reason quite flaky, relatively speaking. Every couple of days, I would suddenly find that the XPS 12 was off the network. When I checked the WiFi control panel, I could see the appropriate networks, but trying to join any of them would result in an error. The fix was to simply disable and then re-enable WiFi via the keyboard shortcut, but I’m not used to seeing this sort of problem with Intel WiFi controllers. Updating drivers didn’t help here, so perhaps I just received a slightly flaky unit in this regard. 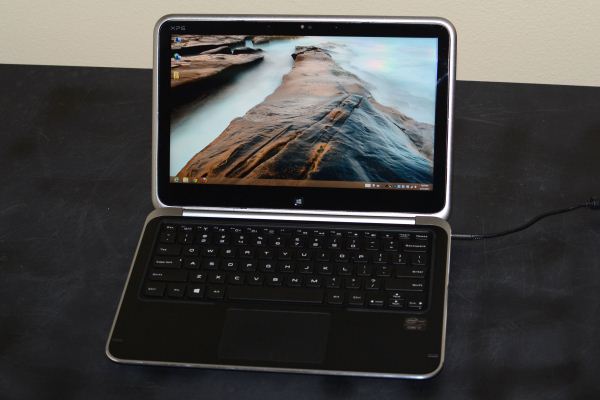 While the XPS 12 is a hybrid device, it’s still primarily a laptop I think, so I’ll start here. Other than the above comments about the build quality, the most important elements for a good laptop experience are going to come from the keyboard, touchpad, and display. Dell gets two out of three with the XPS 12, with the touchpad being the part that misses the boat. I understand that the touchscreen partially obviates the need for a touchpad, but when I’m typing I still find it more natural to reach down to the touchpad rather than up to the display. YMMV, naturally, but let me give the full scoop.

The hardware for the touchpad apparently comes from Cypress, which isn’t one of the more well-known touchpad brands. In order of quality, I still rate Synaptics at the top, with Alps and ElanTech coming in roughly tied for seconds. From there, it’s a moderate drop down to the Cypress touchpad in the XPS 12, with the only other touchpad brand that I can recall using that’s worse than Cypress being Sentelic. I don’t know if the problem is with the core hardware (e.g. the integrated circuits and finger sensing technology) or if it’s the drivers—probably a bit of both. Whatever the cause, I’ve had numerous clicks, drags, multitouch swipes, etc. simply fail to register on the touchpad. Sometimes the touchpad will stop working entirely, and oddly enough the only way to get it to start again is to touch the screen. Even when it does work, it’s not as precise as I would like—using two fingers to scroll through a web page for example can be rather choppy when you swipe and the let the scrolling “coast”. Perhaps Dell can fix the issues with an updated driver, but I had enough trouble that I’m guessing that won’t be the case.

The good news is that the touchscreen works far better than the touchpad, so if you can make the mental switch to using the screen you might forget about the touchpad issues. Scrolling, coasting, pinch to zoom, swiping, etc. all worked well for me on the touchscreen, and while you will have to deal with some fingerprints over time it worked about as well as dedicated tablets that I’ve played with…mostly—I’ll get to the exceptions in the tablet portion below.

The keyboard is one of the better Ultrabook keyboard offerings, possibly even besting the ASUS UX31A keyboard in terms of overall feel (though I understand that’s a highly subjective statement, so take it for what it’s worth). Key travel is decent, the layout is good, and there’s no crazy missing row of function keys like on the Acer S7. The keyboard also comes with backlighting, a must for any modern laptop in my book, and other than that I really don’t have much to say on the keyboard. It works well for me, and I’ve typed a fair amount of text on the XPS 12 over the course of this review.

Last up is the screen, and here Dell once again swings for the fences but comes up short. Dell uses a 12.5” 1080p IPS panel, which means great viewing angles and a high resolution for a small display. The problem is that colors just don’t look quite right, and when I calibrated the display I found that once again the results were way off. Post calibration, both the blue and red intensity have to be significantly reduced to get decent colors, and even then the result isn’t as good as what we usually see. I do have to wonder if Windows 8 might be messing up my testing a bit, as both the Acer S7 and Dell XPS 12 have very similar results, but for now it looks like it’s just a case of poor calibration from the factory. It’s 2013 now, and while it might cost $1 extra per unit to calibrate the colors (or even $5), it’s time to make that effort—particularly on a $1200+ Ultrabook. Actually, even if Dell just took a sampling of ten LCD panels and profiled them and then averaged out their profiles and applied that to all the XPS 12 laptops, the result would be much better than what you currently get—and cost in that case would be negligible.

Overall, as a laptop the XPS 12 works reasonably well, but it’s nothing you haven’t seen before. Performance is comparable to other Ivy Bridge Ultrabooks, the keyboard and display are better than average, and the touchscreen is something I imagine a certain set of users will really like (and others will probably loathe). Flip the screen over and turn the XPS 12 into a tablet and things take on a decidedly different feel.

Dell XPS 12: Everything to Everyone? Subjective Analysis Continued: XPS 12 as a Tablet
Tweet
PRINT THIS ARTICLE
Comments Locked