NZXT has made a lot of really smart decisions as far as overall design goes with the Phantom 630, but there are still a couple of places where they need work. Assembly went pretty smoothly (I can't stress enough how important hinged side panels are), but in the interest of progress I'm going to nitpick the hell out of this because it is the weakest part of the 630's design.

Installing the motherboard is about as easy as it gets; NZXT ships the 630 with standoffs for an ATX motherboard preinstalled, which is an appreciated convenience. The only thing they're missing that other manufacturers have employed is a center stud that can be used to line up and effectively hold the board in place. It's also worth mentioning Lian Li was successfully able to make motherboard installation "toolless" by including special thumbscrews for this part, but that's a convenience that's not strictly necessary.

Where NZXT seems to keep running into trouble is with the drive sleds. The 630 uses the same sleds the 820 used, and they're just too flimsy. When the 630 arrived, most of the sleds were out of alignment, and they pretty much *need* a full hard drive installed to even snap in properly. Note also that the drive sleds enter the cages from the rear of the motherboard tray. Corsair, Antec, and Fractal Design typically get this part of the assembly right, and I get the feeling this is one of the places where NZXT is still cutting corners, because these are still too flexible and they just don't really lock into the drive cages very firmly.

Thankfully the drive trays used for 2.5" SSDs behind the motherboard have a slightly simpler and much more secure design; these are held in place by a single thumbscrew, and the simple slot-down mounting is exactly firm enough. NZXT also includes incredibly secure, firm latches for the 5.25" bays, though I wish these latches were on both sides instead of just the side above the motherboard tray. 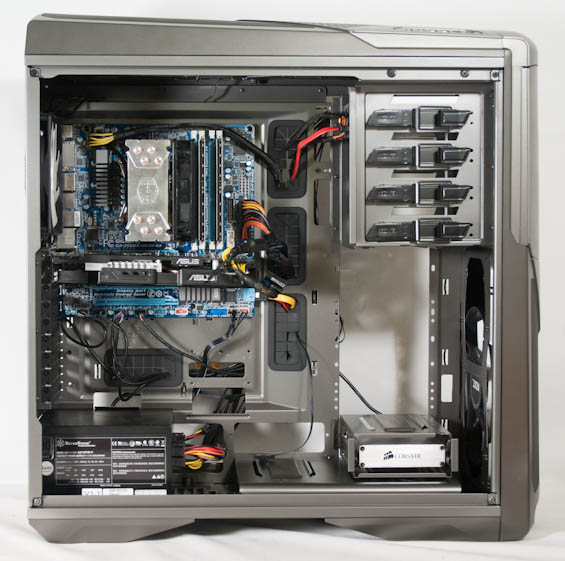 You can color me surprised that the expansion slots don't use thumbscrews, though. I'm not sure what the reason for this change is, and I'm not particularly peeved by it since most thumbscrews are installed so tightly that you need to use a screwdriver just to remove them without losing your fingerprints anyhow, but it's an odd omission. The power supply continues to use the same screws every other case does, but NZXT thankfully includes enough struts in the bottom of the case to support power supplies short and long. 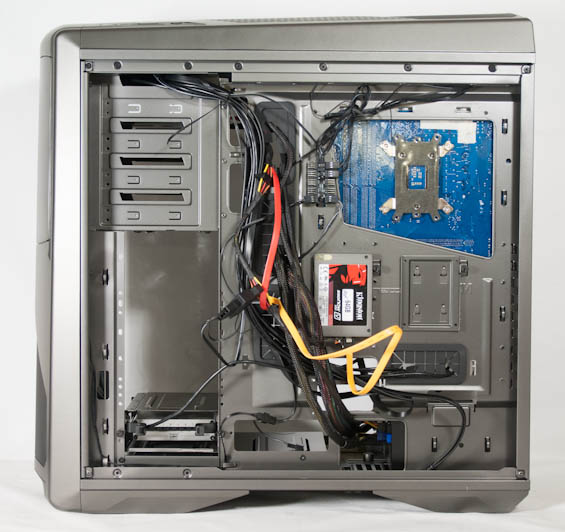 NZXT did get the cabling mostly right, but there's another major gaffe here. While the space behind the motherboard tray is copious to begin with and only improved by the smart cabling channels, and I'm really happy to see a central fan control hub, it's almost impossible to route the AUX 12V line behind the motherboard tray. There's a hole above the tray that theoretically allows for it, but in practice the clips on the lead itself cause it to be too thick to fit. It's kind of bizarre to see this kind of flaw come through the design when so much of the rest of it is spot on, but there you have it. At least there are plenty of rungs for zip ties.

If I seem to be nitpicking, it's only because I'm by and large talking directly to the guys who designed the Phantom 630 and asking for these things to be addressed. They're so close to a ten-out-of-ten design here, and these little things can come together to compromise usability somewhat. In the grand scheme of things these issues are minor enough that most users can and should be fine, and they're definitely overshadowed by the other perks of the 630's design.