The Archos 101 XS Review: Prettier, Faster, So Much Better

Archos has backed off the "World's Fastest" claims of the marketing for the G9 Turbos for this campaign. If they'd made the claim again there’d be some evidence to suggest it wouldn’t be too far afield. We may not have had high hopes for the OMAP 4470 as a performance part, seeing it more as a place holder for Windows RT until an OMAP 5 part was ready, but it turns out it can be a bit of a scorcher.

At this point, we’ve covered OMAP 4 for what seems like an absurdly long time. Indeed, it’s been over a year since Brian published this, an architectural overview of the OMAP 4470 we’re looking at today. TI has long been a proponent of the idea of nestling a low-power core alongside a more powerful core, and we’ve actually seen this throughout the OMAP 4 series. Alongside each ARM Cortex-A9 core is a Cortex-M3 core, which provides a site for certain low level code to be processed without loading the A9s. TI sees this as a power savings opportunity. In OMAP 4470 they took this same idea and applied it to their GPU. Included alongside the SGX544 (a significant upgrade over the SGX540 that preceded it) is what they’ve dubbed their Composition GPU (CGPU). As the name implies, this lower power hardware is devoted to 2D composition, allowing the GPU to remain mostly idle when, say, you’re flipping through home screens. Here TI’s not just claiming a power savings, but also touting the ability of the CGPU to perform certain 2D operations faster than the GPU, netting a performance gain.

Archos has worked to tweak their Android build to perform as well as they could, and have leveraged all that TI’s silicon has to offer. Has all that hard work paid off? 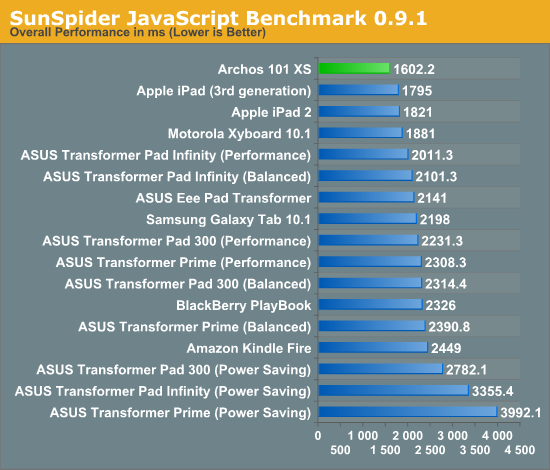 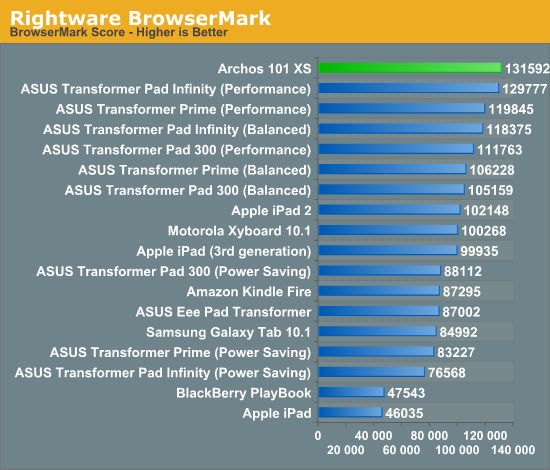 Browser performance is chart topping, beating both the new iPad and the lot of Tegra 3-equipped Transformers. I’ve always been a bit frustrated with browser performance test, their results on similar hardware have such a tendency to vary as to make me believe the results are contrived by the OEM. But that’s typically when a device bests the rest in a single benchmark, while it languishes in the other. That doesn’t seem to be the case here.

But what about that GPU? Let’s take a look at a chart so old, I can hardly bear it.

The SGX544 is effectively half of the GPU we saw in the iPad 2, the only difference between the SGX543 and 544 being Direct X designations. GPU clocks in the iPad 2 were far more conservative, though, than the 384 MHz we see in OMAP 4470. When Brian looked over TI’s claims he found some rationale for their claim that their SGX544 performance would be 2.5x the SGX540 it replaces. As it turns out, that’s almost exactly the case in some of our tests. 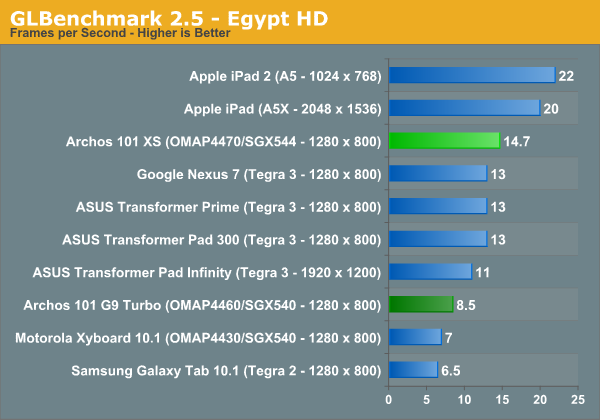 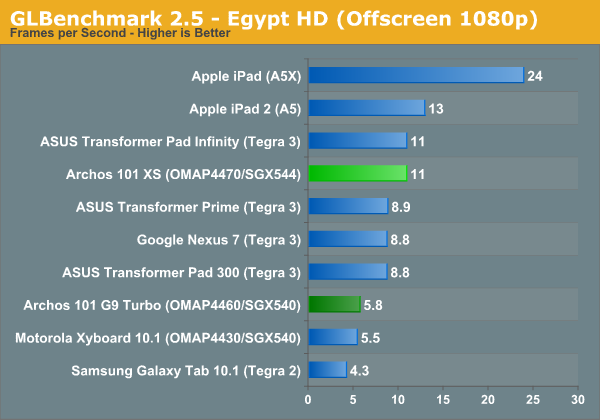 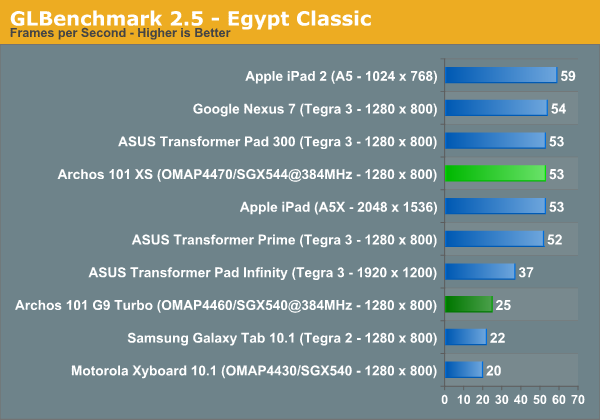 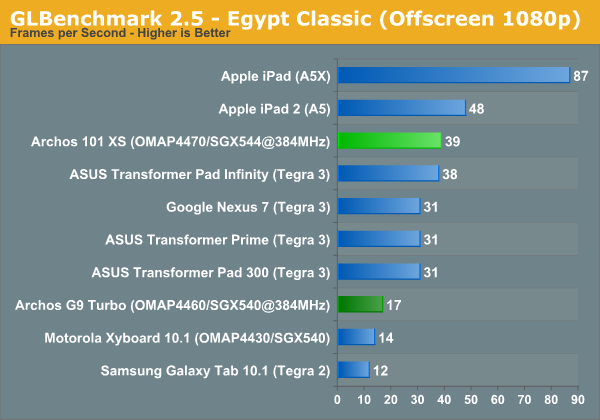 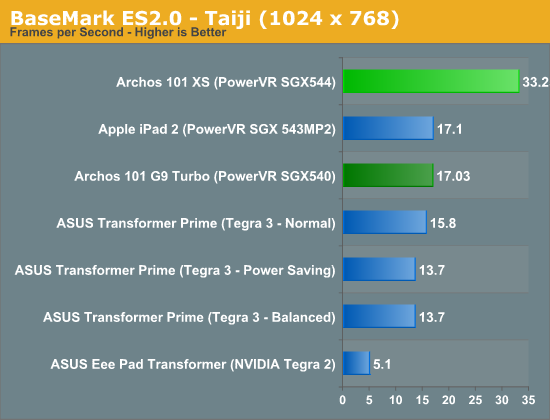 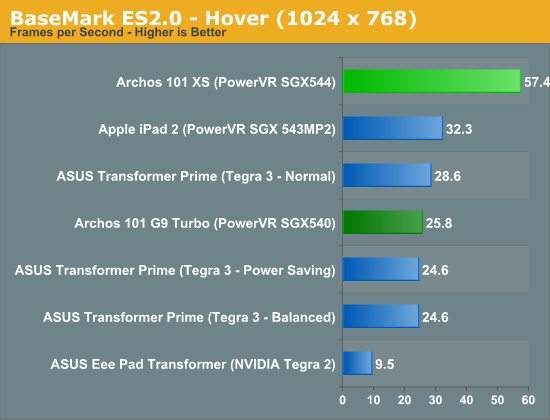 Where the G9s weren’t able to rise above the pack in some of our tougher GPU tests, the XS stays firmly planted at or near the top of all of our GPU tests. And despite being a single core to the iPad 2’s dual core GPU the ~12.3 GFLOPS bestowed on this SGX544 keeps it competitive with the iPad 2, particularly in the off-screen tests.

When Apple debuted the A5 they set the mold for future mobile SoCs, where a big GPU, complimented by hardware accelerated UI composition, would be integral to a great user experience. Samsung seemed to have picked up on this idea, packing the impressive Mali-400 MP4 into its Exynos 4xxx offerings. Qualcomm and TI have been a little later to this game, ramping up clockspeeds and doing some minor architectural tweaks to eke out as much performance as they could out of their last gen GPU architectures, Adreno 2xx and SGX54x, respectively. The good news is that each has been able to get quite a lot out of these older parts; the bad news is that a lot more power is right around the corner. So while the XS GPU performance is chart topping, that status is likely to be short-lived. But does it really matter?

Within the PC space the Atom and Core 2 era of processors defined a ‘good enough’ standard that persists somewhat to this day. While there are certainly performance and feature gains in a modern Core i5 to justify upgrading from a Core 2 era CPU, for the vast majority of users, a decent Core 2 will be enough; and some may even do fine with an Atom based system. We seem to be reaching this inflection point in the tablet space. The real world difference between two given Android devices has more to do with the software than the actual hardware inside. If you don’t believe me, go find an International SGS III variant, with Samsung’s cutting edge and stonking Exnos 4 Quad inside, and compare it alongside a Galaxy Nexus running Jelly Bean. The latest edition of Android pushes the relatively modestly powered Nexus well past the quad-core SGS III where it matters most, smooth UI performance. And while the beefier GPU and extra cores may help the Exynos 4 Quad when resolutions climb past 720p, it’s memory bandwidth that’s the real bottle neck there today, so the advantage won’t be fully realized until Android sees a SoC that focuses on that issue, a la Apple’s A5X. 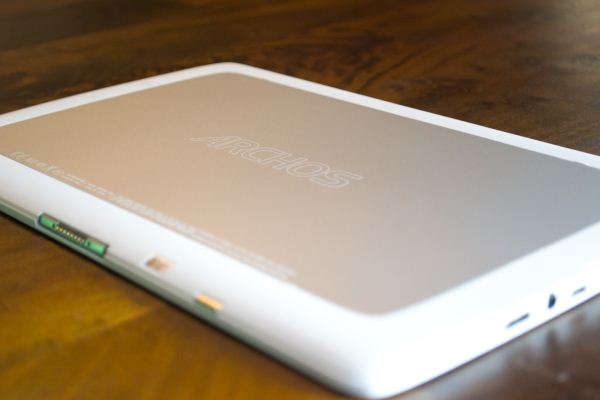 What Archos has done is, I believe, set the bar past ‘good enough,’ and planted it firmly in the performance realm. Truth be told, we weren’t expecting much from the OMAP 4470; it just felt antiquated by technology standards. But solid hardware and a focused approach in software to draw out as much performance as the silicon would allow has very nearly won the 101 XS the title of World's Fastest. It's certainly far in excess of our expectations.