Given that the Antec Three Hundred Two is a fairly simple and staid affair to begin with, it stands to reason assembly would be just as simple and staid. That's mostly true. It's not as easy to put together as something from Corsair might be (currently my standard for ease of build), but it's close enough.

Antec graciously has four motherboard mounts already in place, something Cooler Master couldn't be bothered to include in an enclosure four times as expensive, and once again it's a small touch but it's a welcome one that speeds up the assembly. Where things do go a little bit south is in the wiring for the two Antec TwoCool fans that are included; their fan controllers are both externally accessible on the back of the enclosure, but the 140mm fan requires a four-pin molex connector while the 120mm fan's three-pin cable is too short to actually reach the fan header on the motherboard. As a result I had to use an adaptor cable I had laying around to actually wire the rear fan. Obviously, choice of motherboard plays a role here, so YMMV.

Nearly everything else after that point was smooth sailing. The toolless rails that Antec includes for mounting 3.5" drives are slick pieces of engineering; they slot into the screw holes on the drive, but you can actually pick up the drive by the rail and it won't fall off. 5.25" drives also benefit from a toolless locking mechanism that's among the best I've seen in the enclosures I've tested, feeling remarkably secure despite only locking in on one side.

The two places the assembly got at all hung up were the 2.5" drive mount on the bottom of the enclosure, and the metal extrusion from the motherboard tray that holds the power supply in place. I'm still not a fan of having to screw a 2.5" drive into the bottom of a case, and there's just no good way to orient it. If you face the drive's ports to the open side of the case, there's barely enough space to get a power cable in there, much less a SATA cable. If you face the drive's ports to the back of the case, there's no cutout in the tray to route the cables and you have to feel them out. 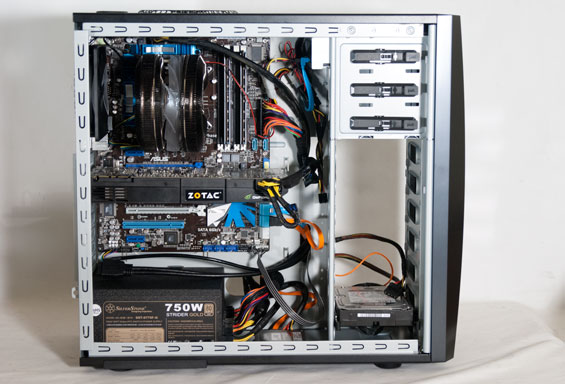 Mounting the power supply was a bit of an ordeal until I just grabbed a pair of pliers and bent the metal extrusion upward. It took some pressure off the power supply, but also allowed me to fit the thing in there to begin with. Problem solved. Again, component selection could help here; our SilverStone Strider 750W PSU is by no means massive, but it is 180mm while other PSUs are only 160mm. 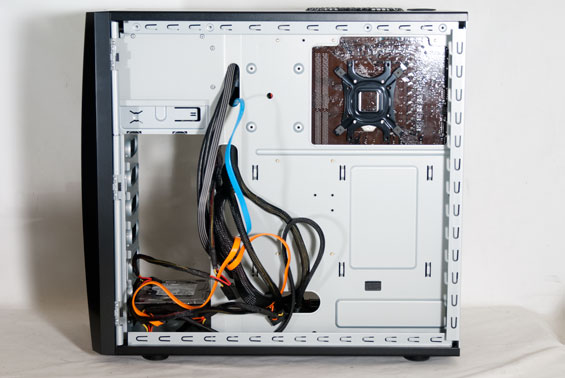 Wiring everything up after all of this was mostly a breeze, though the Three Hundred Two would've benefitted from slightly bigger routing holes in the motherboard tray. They're rounded off to make things safe, but they could stand to be larger. That said, most of the complaints in assembly are minor; the Three Hundred Two comes together quite well, and getting the back panel on was surprisingly easy. Where assembly is concerned, the Three Hundred Two is a smart design.