In and Around the SilverStone FT03

For scale, the FT03 is about the size of a small dustbin or a couple of shoeboxes stacked up. The Corsair Graphite 600T that now houses my personal machine honestly looks kind of silly and needlessly large compared to the FT03 at nearly twice the depth.

SilverStone offers the FT03 in both silver and black finishes; our review unit has the silver and white finish while the black unit will be seen in our upcoming system review. Externally there isn't a whole lot going on; SilverStone keeps the finish attractive, simple, and resilient. The front of the tower has a tasteful embedded SilverStone logo and a slot for the internal slot-loading optical drive, while the left side has a removable vent for one of the bottom-mounted intake fans. The bottom has a removable fan filter that attaches magnetically; the power cable for the FT03 also routes under here. Finally, the top of the case has a removable white plastic grate that fits well with the overall styling, and this covers the I/O shield, four expansion bays, hot-swap bay, and exhaust fan. There are indentations on the side panels to allow for cabling to route between the grate and the case itself, and there's a small panel at the tippy-top that has the power and reset buttons along with the bridged USB 3.0 ports (sorry, no motherboard header support yet) and headphone and microphone jacks. Overall it's a very clean and slick looking design, at least externally.

There are admittedly a couple of hitches, though. If you have to use any kind of video port adapter, like DVI-to-VGA or Mini-HDMI-to-HDMI, you'll want to use a flexible dongle or an adapter cable; the hard physical adapters wind up rising above where the grate would be and thus prevent you from using it. I also found myself frequently accidentally hitting the power and reset buttons when moving the case, which isn't a huge problem but isn't ideal either. Plugging in the system can also be a little difficult because the plug on the bottom is recessed, and the magnetically attached filter feels pretty loose. To wit: the review unit from the boutique builder I have doesn't even include that filter. I'll also go ahead and spare you the wait: I would've liked to have seen a fan controller included in the top panel. If wishes were fishes, etc. etc., but it would be a welcome addition. 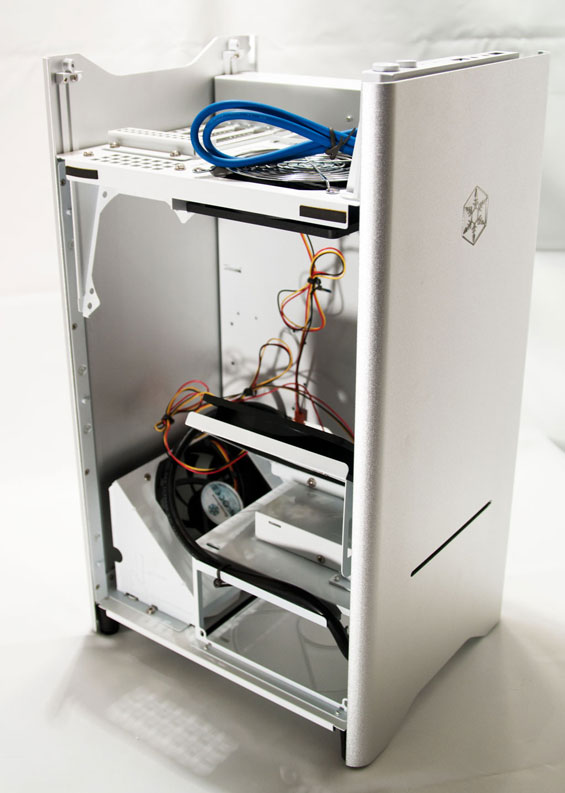 When you get to the internals is when things start getting really interesting. The two side panels slide up and off easily (maybe a little too easily), while the face snaps on and off easily and securely. SilverStone engineered the guts of the FT03 in a very slick way that actually winds up maximizing the space inside. While we use a Mini-ITX board for testing, there's space in here for a Micro-ATX board and two large video cards. The power supply cubby also works remarkably well, and cable routing is smart.

If there's one area of concern, it's the side of the case designed to house storage. There's space here for two 3.5" (or 2.5" with adapters) drives and a 2.5" drive, as well as an additional 3.5" hot-swap bay complete with connecting cables. The essential problem is that there's virtually no airflow here. That's mitigated somewhat by the aluminum side panels which are good at radiating the heat off of the drives and allowing them to be passively-cooled, and the hot-swap bay in particular is cooled by a large chunk of aluminum affixed to the side panel itself. The design here is as smart as it could conceivably be, as the drive mounts are designed specifically to put the drives themselves in contact with the side panel. Later on you'll see drive temperatures measured were more or less in line with what hard drives in notebooks hit, and are well within drive tolerances, but if the FT03 has an Achilles' Heel it's here. To be fair, though, I don't think I could armchair engineer a better solution than what SilverStone has done.