The Adamo is stunning to behold. There simply is no better word to describe it. And oh man, is it thin. Best comparison: when closed, the Adamo is roughly as thick as the bottom casing of the 13” MacBook Pro. Yeah. 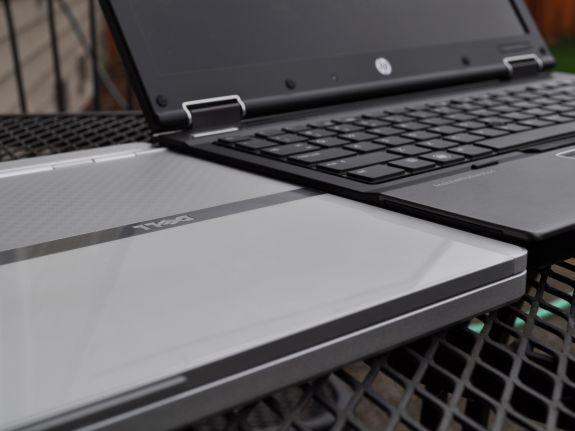 Dell really outdid themselves with the Adamo. Every exterior surface is either glass or machined aluminum. The bottom casing is a single piece of aluminum, a la Apple, and it’s less than a half inch thick. The LCD lid is half glass, half aluminum and surprisingly rigid for something so thin.

All of Apple’s products follow the design principles laid out in Dieter Rams’ 10 Commandments, which pretty much condenses to “Thou shalt be minimal, thou shalt be elegant, thou shalt be functional.” Dell took those design principles and then added some bling to it. Where Apple’s laptops feature clean surfaces and body panels, the Adamo has a visually interesting pattern on the aluminum part of the lid and the bottom of the notebook, not to mention the polished aluminum strip in the middle of the lid. Remarkably, even with the gloss and the aluminum brightwork, the Adamo doesn't look overdone. It has just enough glitz to be eye-catching, but not too much to be a distraction.

The chassis is just a single piece of aluminum, milled out from a thick sheet of aluminum. However, it appears that Dell's engineers reduced the thickness of the aluminum beyond normal levels, presumably to create as much space for the internal components, but they went far enough to allow for a fair amount of flex throughout the chassis. The body of the notebook and the LCD lid are both fairly sturdy given the thinness, but overall when compared to the similarly thin MacBook Air, the Adamo isn't as rigid or as solid structurally. There's some perceivable flex, which is unexpected in such a premium-level device. Also, the screen shows quite a bit of ripple effect under pressure. Again, given the thinness, it's not unexpected, but don't expect this to be a particularly rugged system.

What the thinness can't explain away is the quality of the keyboard. I was pretty hopeful about the backlit keyboard, with it's full size keys, logically laid out keys, and stylishly modern font on the keys. As with the rest of the notebook, it's one of the most elegant looking of its kind. However, the feel is pretty poor - the keys themselves feel plasticky and cheap, and there's perceptible flex. Not a lot mind you (how much give could there be on a .65" thick laptop?), but it just doesn't feel particularly well put together or built to last. The backlighting is pretty weak, so against the silver keyboard it makes it pretty difficult to see in higher light situations. But in the dark, the backlighting is a great feature to have. 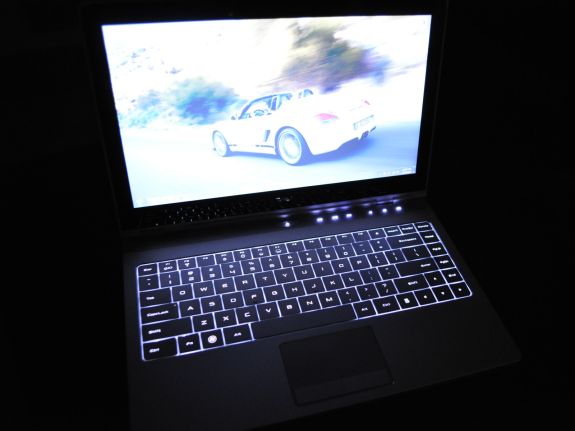 Ports are sparse, but not as limited as on the MacBook Air. In comparison to the almost laughable single USB, micro-DVI port, and headphone/mic combo jack on Apple's superthin portable, the Adamo has a pair of USB ports on the rear panel, joined by a DisplayPort video out, an eSATA/USB combo port (a rarity on ultraportable computers), and Gigabit Ethernet. On the right side, we have a combination headphone/mic port and a built in SIM card slot for 3G data. Interestingly, the SIM slot is designed the same way as the iPhone's SIM card tray and rendered in anodized aluminum, evoking memories of the original iPhone's SIM slot. There's also a 1.3MP webcam and a mic, which work well for Skype. 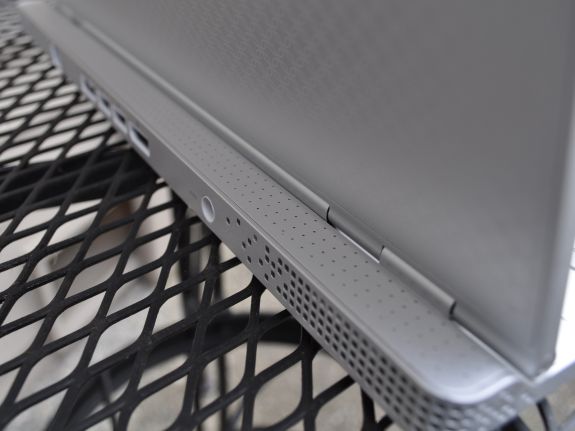 The speakers are mounted on the extrusion beyond the LCD hinge, presumably because they wouldn't fit anywhere else in the chassis. Unfortunately, this means everyone else around you can hear what's going through your speakers better than you can. The speakers aren't that great, and frequently you want more volume from them. This likely has more to do with them being behind the screen and less to do with the speakers themselves. More impressive is the actual speaker grille, with laser cut holes to let the sound through and a single status light concealed in the middle. The grille is attached magnetically (though it needs to be pried off and doesn't remove easily) and covers the Windows COA sticker along with some of the chassis screws. Putting that much engineering and design thought towards a normally minor piece like the speaker grille again just goes to show how much attention Dell paid to every painstaking detail during the design process of the Adamo.